What Would Be The Advantages Or Disadvantages Of Merfolk Having Extra Fins?

I've always liked the idea of merfolk having extra fins(by this I mean fins like the dorsal and pectoral ones and not the main tail fins). After seeing this article about how fish use their many types of fins it only interested me more. To me it seemed like they would help merfolk swim more efficiently, but after coming across this article on dorsal fins, I began to question how useful they would be to merfolk. In the article they mentioned that their hands would serve the same purpose as the fins would while in the water, but both the question and answers did not give much information to go by. The merfolk in my world will mostly be the typical half-fish-half human type as of now but some different types will have variation in their anatomy. If some types of fins could be useful, then what types would be useful and which ones would not? It would be amazing for the merfolk in my world could have these fins, but I don't want them to do more harm than good.

I hope this question makes sense. Please let me know if I left anything out that should be considered. Thanks!

Your merfolk do not use hands to swim.

Let us consider the Man from Atlantis. The 1977 TV one starring Patrick Duffy, who went on to have some fame as Scuzzlebutt's leg. 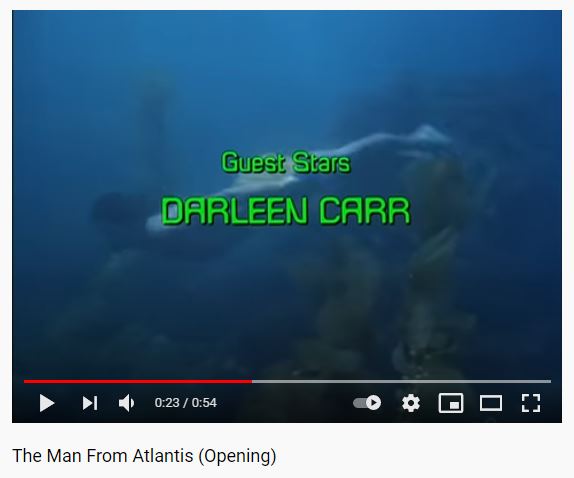 He swims using his back and legs in a butterfly kick. His hands stay at his sides, sculling. He never reaches forward. Here is a good gif of him swimming. This method of swimming makes a lot of sense for the mammal body plan and is what cetaceans use. Patrick Duffy fairly cooked along underwater with this stroke. I cannot say this was a great show but he was a great merman.

Fins to provide stability would help Patrick, I think, possibly at the expense of his considerable aesthetics. A dorsal fin at least but one could justify additional fins as your own aesthetics deem appropriate.

Fins just need to be seen as sexy

There are many reasons for evolutionary features to evolve other than pragmatic ones.

For instance something could evolve because it is sexy. As your merfolk culture is half human, one could expect a similar emphasis when choosing a partner to be on traits that are sexually desirable, perhaps there is great respect for other fish, they appear as strong swimmers, and are thus sexier, so eventually dorsal fins would appear in response to this desire.

This is why we have colourful fish, 'flowery' fish with lots of visual spectacle. It is actually damaging in terms of practicality and pragmatism, but useful for signalling to mates your prowess.

And in many ways, the impression of your prowess is more important than actual prowess. This is called signal theory, so for instance in our culture being 'strong' isn't necessary about actual strength, but just that we 'look' strong. So this is reinforced by cultural or psychological attitudes more than physical requirements.

Not the answer you're looking for? Browse other questions tagged creature-design fantasy-races underwater merfolk or ask your own question.

0
Why merfolk do not evolve dorsal fin?

38
Is it more likely that merfolk would evolve with horizontal or vertical tails?
3
Why would merfolk evolve arms?
11
Mermaids on Land?
20
Units of measurement, especially length, when body parts vary in size among races
23
Fantasy Macro Economics: What would Merfolk trade for?
3
Could this idea for an anatomically functional merfolk "sound" plausible?
7
Could merfolk create pottery and other vessels for storage?
3
What method of waste disposal would be the most practical for merfolk?