What kind of rock could I use in my mountains?

in my world there is a mountain system where most of the rock is some kind of material or mineral that conducts heat very well. So much so that there is no snow on the peaks as it melts quite quickly if it falls. I would also like to take advantage of these properties so that the civilizations that settle there can use the geothermal energy of the mountain system as their main source of energy. Is there any mineral or rock type that exists that could have these properties? Also, if this mountain system were huge, for example as large as the Alps, what consequences would it have for the climate?

I recycled this answer of mine from here: How would a 30-kilometer tall mountain on an Earthlike planet look?

These folks want a tall mountain but as a bonus it was a hot mountain too because of the thermal conductivity of diamond.

A mountain of diamond seems so trite, but really it would be better in many respects. Lets get it over with.

So diamond: density of 3.5 and compressive strength of 60 GPA; maximum mountain height is 196 km

These diamonds would have been formed in the atmosphere of a ancient gas giant and then incorporated in the crust of this Earthlike world. I envision this huge, partly fused mountain of diamond extending farther down below the surface than it does above. Despite the huge mass balanced on one point, it does not sink further down because the bottom of the mountain is floating in denser, partly metallic molten materials. The diamond mountain is essentially an iceberg in the crust.

This also gives insight into how this diamond iceberg mountain would look. There would be no plants on it and no ice or snow. Diamond is one of the best thermal conductors there is. With its big bottom side down into the mantle, the entire thing would be very hot. 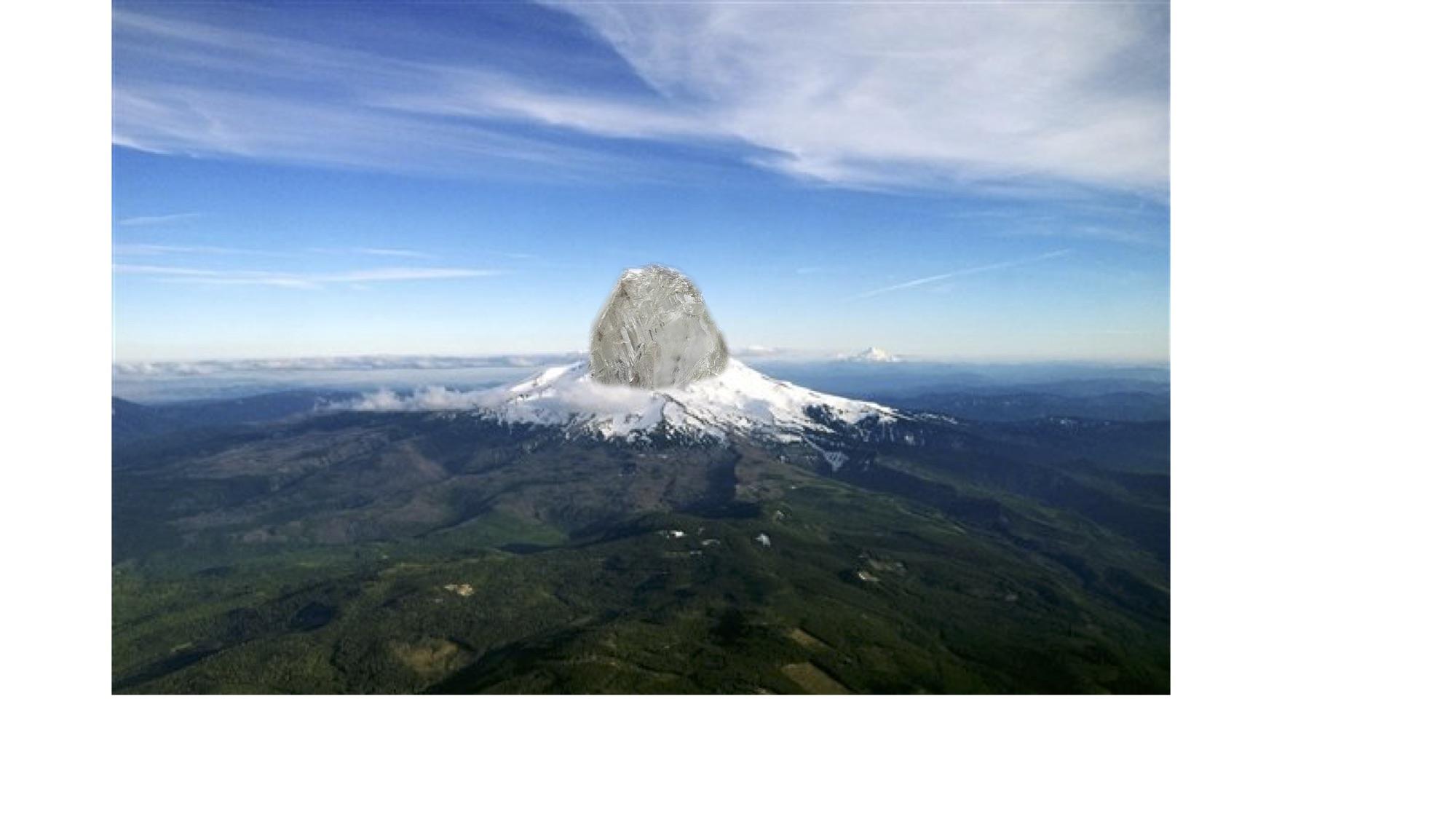 my own assembly. mount hood with uncut diamond

The remains of coal mining

In regions where coal mining was predominant, it was common to put the waste of mining aside, shaping a cone, usually dark in color. Over time, they form spoil tips, which easily reach 150 m in height, but I guess it could go further and higher if people continued to look for coal. 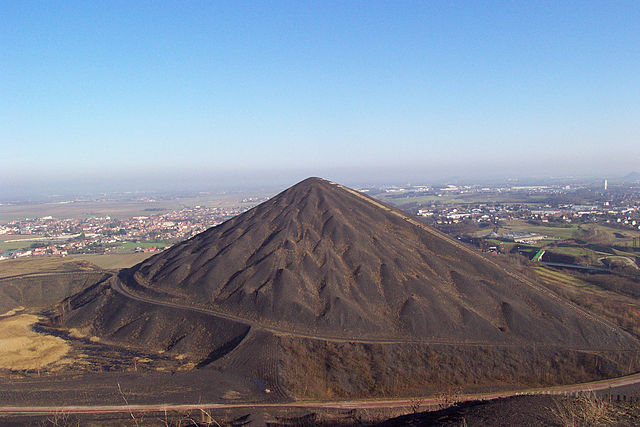 A "terril" or Spoil tip at Loos-en-Gohelle, North of France1

As far as I am aware, this composition has a triple effect to heat : First it's black, so any ray of sun will get absorbed, increasing its temperature. Then, it is often subject to internal combustion, increasing the temperature increase. Finally, because of various chemical elements, plant life has a much harder time growing on it, giving less freshness and therefore more heat.

Unless your world is able to directly transfer "low" heat (as in under water ebullition point) into mechanical energy, you'll probably will never get what you wish.

Indeed, it's already hard to get a whole place to burn over long period of times. Yes, there are "red" volcanoes, but high temperatures are reached only in places where you don't want to put a long term-infrastructures, such as a power plant :p. Moreover, even if you do find a place with a high-enough temperature, you'll only be able to build on its surface without killing your workers, which drastically reduces the power output and maneuverability in and out of your mountain. Recall : If the heat of your mountain is high and easily transmitted, then any of your power-plant operators will quickly suffocate, even if they're equipped with protective equipments.

My suggestion isn't perfect either, as the coal remains are quite unstable by nature, due to the way it has been formed or/and by the explosive components inside. You should expect explosions and possibly landslides from time to time.

Still, given the Steampunk tag you've put on your question, I guess it's quite in sync with what nearby populations could have done over a very long time :).

Its impossible without handwavium.

No matter how good a thermal conductor you make it that will just result in the rock being colder not hotter. Even active volcanoes develop snow on their peaks. All you are doing is cooling your heat source faster. Note the peaks of mountains often have little to no snow just because they are steep, most of the snow is in the valleys. 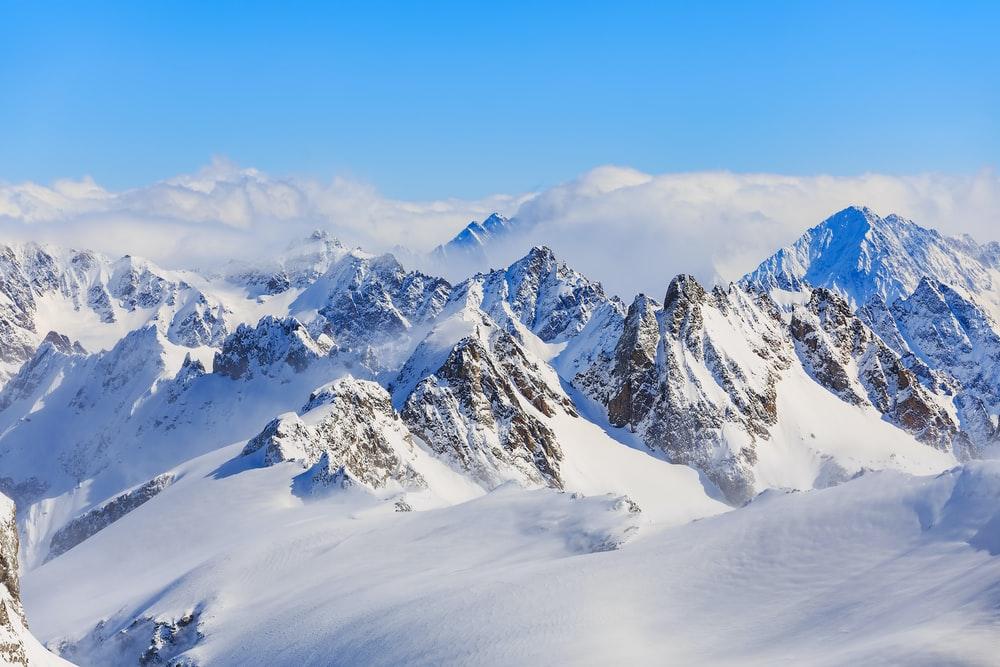 If the mountain range is mildly volcanic it will supply plenty of energy. volcanic geothermal can be used for dry steam power generation which is very efficient and cheap to boot. Hot wet rock geothermal is even better and you actually want snow for that because you need a lot of water in the rock.

Well, if this is science fiction, then good news -- you make the rules!

Why not just create your own special type of rock? It can have all the properties you need. As far as geothermal energy goes...you could say that the mountains contain a lot of thermal springs, and that your special rock conducts the heat very well. Maybe steam from the streams can be used. Or maybe the civilizations have found ways to magnify the heat from the rocks for energy. IDK, I wouldn't think too hard about it. Just do what's necessary for your story :-)

As for the mountains affecting climate...I'm no expert. But I think usually mountains tend to absorb weather fronts, creating more or less peaceful valleys. Could be wrong though. I would simply research different geographical areas like the one you wish to create so you can make an informed decision.

If you want to have a dry mountain range you may have to replicate the environmental conditions associated with the Atacama Desert in south America.

Failing that, the mountain range may need to be a constantly active volcanic gash that brings hot magma to the surface to erupt as lava. It's also how the inhabitants can utilize geothermal energy.

Not the answer you're looking for? Browse other questions tagged geography geology energy steampunk mountains or ask your own question.

7
How would a 30-kilometer tall mountain on an Earthlike planet look?

14
Unsettled continent
7
What is the climate of a mountain range at the border of the polar front?
7
Cold Earth (or a big rock with atmosphere)
7
How would a 30-kilometer tall mountain on an Earthlike planet look?
5
What kinds of minerals or compounds could radiate heat?
1
How would the terrain of a snow-covered mountain deter a mechanized army?
3
Could an island on Earth with these climate types exist?
3
What effect would exceptionally tall mountains have on high-altitude wind currents in an Earth-like environment?
8
Is a lake formed and surrounded by mountains, foothills and plateaux possible?