Why there is white ash everywhere?

In my world a war happened between a few tribal leaders a really long time ago. Those leaders had nearly god-like magical powers, giving them the ability to modify bodies, matter (like earth, stone, water), and power (heat, light etc.). They also had access to the highest steampunk tech you can think off.

My tribal leaders waged highly destructive wars for centuries, mainly because they couldn't kill each other. Eventually they tried to imprison one another. However, when the damage they caused to the planet became critical, the orginal creator of the world (who was more powerful than all the others) intervened and banished the tribal leaders to other planes.

Most of the creations of the tribal leaders and the remnants of their wars evaporated into a white ash that now covers a great portion of the planet.

What plausible explanations are there for the white ash? 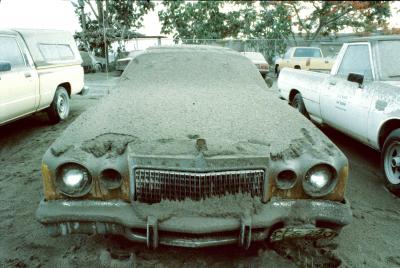 Gray ash comes out of some volcanoes. There can be a lot. It can cover things. It can bury things. The cities of Pompeii and Herculaneum were buried in ash. This car is covered with ash. And the problem is it is scratchy - not like wildfire ash which is soft. The volcanic ash is actually mineral particles, not carbonized trees and brush. If you wipe volcanic ash across the hood you will scratch the paint. That is a minor problem, agreed, but still a problem if people on your world have cars they want to keep looking nice.

Why would a battle of gods followed by intervention by the Creator trigger horrific ashfalls and volcanoes? Why not? It seems appropriate for the scenario.

During detonations of devices at ground level (surface burst), below the fallout-free altitude, or in shallow water, heat vaporizes large amounts of earth or water, which is drawn up into the radioactive cloud. This material becomes radioactive when it combines with fission products or other radiocontaminants, or when it is neutron-activated. [...] After the Castle Bravo test, white dust—contaminated calcium oxide particles originating from pulverized and calcined corals—fell for several hours, causing beta burns and radiation exposure to the inhabitants of the nearby atolls and the crew of the Daigo Fukuryū Maru fishing boat. The scientists called the fallout Bikini snow.

they can easily assemble a critical mass and create nukes with steampunk technology.

An indestructibility enchantment that has been dispelled

The tribe leaders had imbued with their magic almost everything on the world, like buildings, vehicles and animals in order to power up them and use them in their wars. This magic allowed them to be almost imperishable and indestructible, but it also required a lot of mana in order to keep the enchantment active

But after the leaders were banished, they could no more provide their magic power to these items, so all the enchanted items started to corrupt and slowly become ash and powder, as they would have become if not enchanted.

Opening: Tribe leaders waged destructive wars for houndreds of years, mainly because they couldn't kill eachother - instead they tried to imprison their powerful enemies. When destruction of planet they caused became critical, orginal creator of the world intervened and banished those powerful beings to other planes.

Take into account you're citing chronicles from primitive times, we're 120.000 years further down the line. These white ash issues have been under thorough research by historians and archeologists. This peculiar ground layer has been a scientific mystery for many years. Recently, the remnants of a steampunker superstructure were found on Mespa, the neigbouring planet. Now the real story can be told.

Planet got disinfected. A neighbouring planet, inhabited by colonists who fled these wars, set up an operation to do that, because the two parties started to use a biological weapon that could spread through space. As a preventive measure, the planet was completely wiped clean using a gamma ray, taking out the larger cities first.. and then scanning over the planet surface, killing the virus, its makers and anything that could have gotten infected. After a single day, only white ash remained.

Not the answer you're looking for? Browse other questions tagged magic climate geography worldbuilding-process low-fantasy or ask your own question.

8
Everything organic you see turns to ash; extent of damage
22
How to create accurate map with white spaces?
10
Where are the wettest and driest places in this world and why
8
How could the example map from geography books come to exist, and what would it be like to live there?
1
What is a good way to explain why magic doesn't work on people's bodies?
17
Is there any realistic explanation for Earth-like climate on a Sun-sized planet?
5
Reasons to settle outside cities on deserts
12
Why Would Adventurers and Mages Wear Impractical Clothing?