What sort of texts would survive in a sunken ruin?

Hundreds of years ago, the once-opulent city of not-Atlantis incurred the wrath of the gods and was cast to the bottom of the ocean. Now, our intrepid adventurers have been sent to the lost city of not-Atlantis to retrieve forgotten lore recorded by the not-Atlanteans (along with whatever other treasure they can snag).

My question is: What sort of written media would survive at the bottom of the ocean for a few hundred years?

On one end of the spectrum, exposed paper would degrade and water-soluble pigments would run, which is unfortunate because I imagine these would be very common. On the other end of the spectrum, engraved stone would likely survive, but stone is a rather inconvenient method of recording information unless you deliberately need it to stand the test of time.

The conditions of storage might also change things. Could burying a book in mud at the bottom of the ocean (but not too deep that you can't find it) protect it from decay? It is possible that some of the more valuable tomes were cached in waterproof cases, but what sort of container would keep its contents dry while underwater for hundreds of years?

How could this forgotten lore have been recorded and/or stored to survive underwater for hundreds of years until our adventurers discover it?

Not-Atlantis had a technology level no more advanced than approximately medieval (I could do elements of Renaissance in a pinch, but there is definitely no plastic or digital media). Magic is abundant in this world, but we shall assume non-magical means of writing and preservation for the purposes of this question. The ruins of not-Atlantis need to be mostly navigable, not entirely buried in mud and silt. The water should be suitable for aquatic life. The not-Atlanteans were human-like sea-faring surface-dwellers before the cataclysm, so their common writings would not have deliberately needed to be waterproof (although they may have taken special steps to preserve a small number of choice texts).

The less contrived the circumstances for writing to survive under these conditions, the better. I suspect that real-world underwater archaeology and shipwreck salvaging could inform a good answer to this question.

There are several related questions on what sort of writing an underwater civilisation would use. This question differs in that we assume methods of writing developed by and readable by surface-dwelling people, and that I am interested in the longevity of such records (although I expect some overlap in the answers).

Clay tablets have been found in 2,400 year old shipwrecks in the black sea. The tablet is undamaged and completely legible. Since these were also a common form of writing you have no problem justifying writing on them, to last they would have to be fired clay but that was normal for anything intended to be permanent. Unlike pottery it is fairly hard to crush a flat tablet. 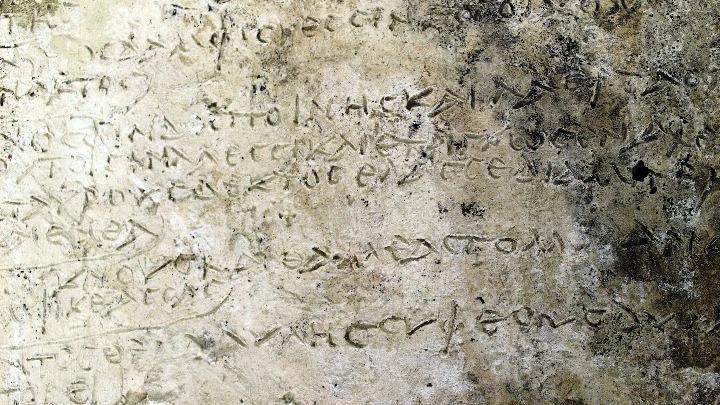 Organic materials don't do well with long submersion, especially in sea water that contains enough oxygen for life to flourish (there are locations in the Black Sea where hydrogen sulfide in the water makes it nearly sterile, and wood has survived for thousands of years, but this requires very uncommon conditions of stagnation).

As in another answer, writing on materials that survive long immersion is the best bet -- pottery, stone, precious metals (even iron/steel does pretty well on the single-century scale -- there are a lot of mostly-intact wrecks from WWII and some a few decades older).

If someone with modern metallurgy was trying to preserve writing in the sea, trading off cost and durability, it would be hard to beat stainless steels -- 304 and more so 316 steels will last a very long time in sea water (because they form a protective oxide layer -- heavy enough to resist even the chloride ions in sea water). Otherwise, platinum group metals (including iridium, osmium, ruthenium, rhodium, and palladium) are very resistant to corrosion (but rare and hard to refine and work) followed by, gold, silver, copper, and bronze (in order of descending durability) -- or heavy, non-porous platings of these on other base metals.

One reasonably plausible option would be engraved printing plates (a technology that predates Gutenberg or even Chinese movable type by centuries), which were often made of bronze for its combination of workability and durability. The writing would be in mirror image, but with most languages that's not a big deal once you know what you have.

Alternatively, if text written on ordinary paper or parchment with ancient inks (carbon in gum binder, iron sulfate/gallate/tannate, or vegetable dyes -- all of which are vulnerable to water in varying degrees) were being protected for a long sea voyage, it might well have been sealed in barrels, pots, or even glass jars -- and pots and jars have been found that preserved drink and foodstuffs for a thousand years and more.

Written or decorated pottery, in particular if enameled, is rather sturdy, the main risk coming from physical damage to the substrate.

Same goes for carved stone, as long as there is sediment covering it and preventing growth of organisms.

Scrimshaw describes carved ivory, tooth or whalebone. These materials are easier to carve than stone and more durable than wood. They do not require firing like ceramic.

Plus scrimshaw is more fantastic. I can imagine public artworks like Trajan's Column carved and written on huge teeth and bones from some unknown great sea creature.

answering question in comment - how long would these materials last? 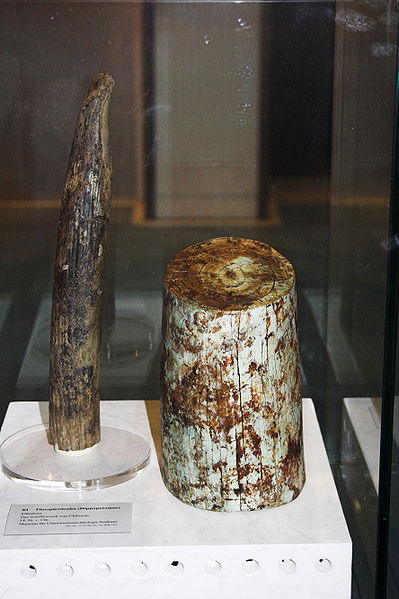 This is ivory recovered from the Uluburun shipwreck. It is from around 1300 BC. That is not a million years, but is pretty old as sunken artifacts go!

Your notion that paper doesnt survive underwater is not true. Depending on the conditions, paper and ink will survive just fine. Scraps of paper form a book were found on Black Beard's ship that sunk 300 years ago. Also, shipwrecks in cold enough water, are expected to have their documents well preserved.

Partial answer, just in my area of expertise, which is pottery, to answer this part of your question:

The ancient Greeks are well-known for painting things on pottery. Would such paintings survive underwater?

High-fire pottery survives quite well underwater. Glazes on such pottery can be quite vibrant and undamaged even after 500 years in the sea, and there is a thriving antiquities business in Asian "shipwreck ceramics". So if your Atlantean civilization possessed the ability to fire pottery to 1500C or more, any "documents" on these ceramics would be clearly and easily readable.

Low-fire pottery, like that made by the Greeks and Babylonians, however, only survives being underwater in ideal conditions, such as the sterile environment at the bottom of the black sea. There, even low fired red/black ware can survive intact and colorful for millenia.

However, in normal shallow waters, since low fire ware is very porous, it gets used as anchor material and even digested by sea life. Even where the ceramic vessels or tablets survive largely intact, any surface decoration gets eradicated, rendering any writing on the clay (whether via glaze or shallow impressions like cuneiform tablets) unreadable rather quickly.

There's one other historical type of clay document that could survive well without being at the bottom of the Black Sea, though, which is fired, enveloped clay tablets. "Secure" documents during the Bablyonian period were enclosed in outer clay envelopes. Sometimes they were even fired, in order to make a "permanent" record of something. If your civilization had a practice of creating archival records by enclosing them in clay envelopes and firing them, such tablets would survive even thriving sea life, because the damage would ruin the envelope, not the tablet.

If the data being recorded was important enough, inscribed on gold tablets. Gold is easy to work with and pretty much inert. afaik there's only one acid that will dissolve it.

Not the answer you're looking for? Browse other questions tagged underwater archaeology written-material .

37
What could an aquatic civilization use to write on/with?
14
Underwater Cuneiform?
9
Civilized Dolphins and their Record Keeping

2
Could ancient Atlantean monuments have survived a flood cataclysm?
1
Sea/Air fighters using current/near future tech?
12
Would the collapse of civilization make turning into a vampire and colonizing the ocean floor a sane idea?
1
How would a colossal explosion affect an ocean-based planet?
8
Plausible futuristic infrastructure for an underwater micronation built 300-500 feet below the surface
8
How would underwater weaponry and technology look under high pressure?
6
How to Salvage From a Sunken Spaceship
4
What technology would be necessary to allow soldiers to ascend rapidly from deep in the ocean and to the surface?
9
Could a non-nuclear sub power itself by ocean energy?