What Point of Departure Would I Need to Turn The World's Largest Cities Into Kowloons?

Tokyo, the city with the highest population number, stuffs in as much as 16,121.8 people per square mile. That sounds like an awful lot, but long ago, there was a tiny settlement with a far higher density. 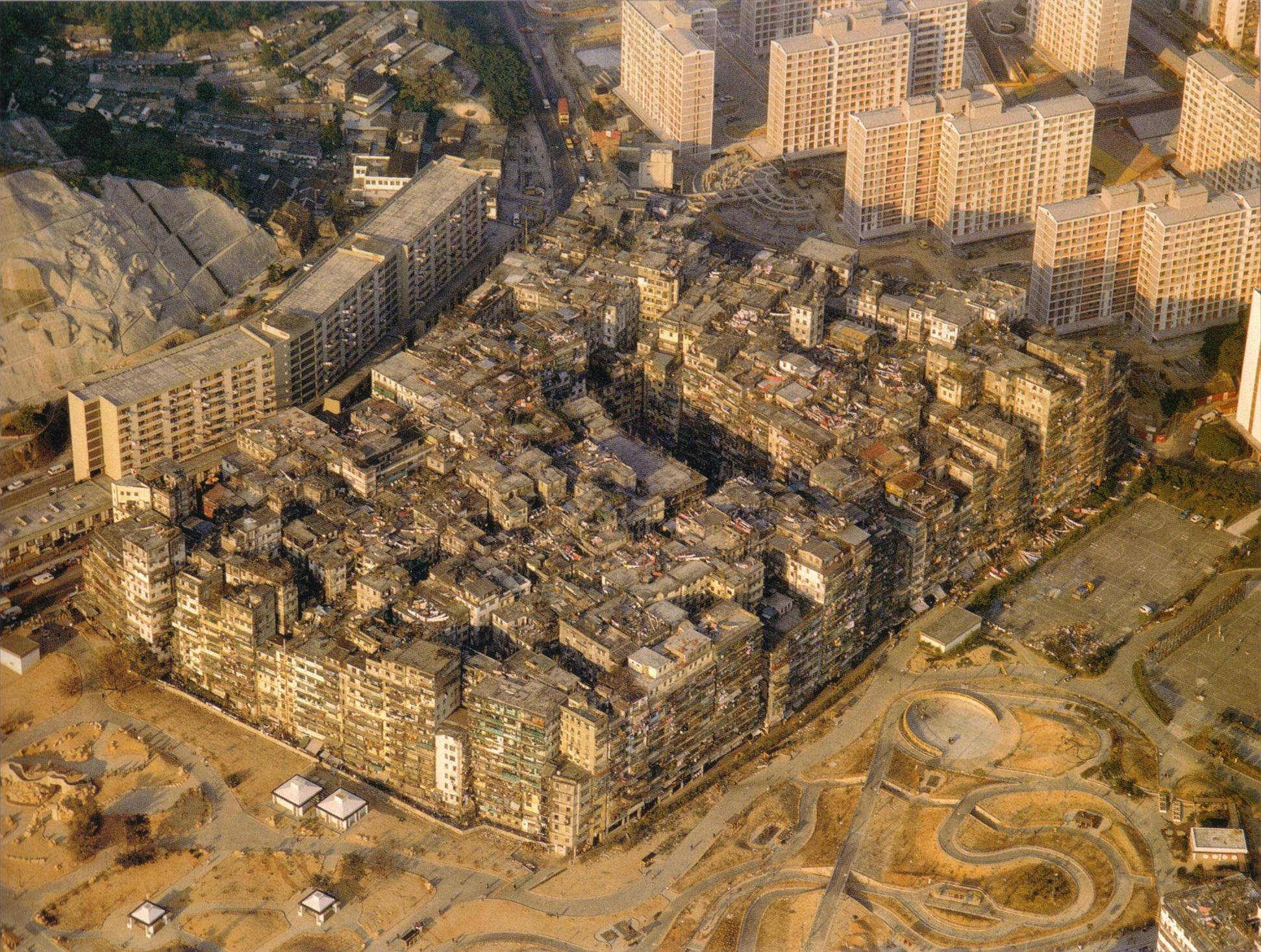 Before it got shut down in 1994, Kowloon Walled City filled in only roughly 6.5 acres of land, yet it was "home" to 50,000 people. That would be five million per square mile!

Despite the nightmare, I've been imagining an alternate history in which the current population is still at 7.5 billion, and the greatest cities in our world--not just Tokyo, but others like Osaka, Beijing, New York, Chicago, Mexico City, Los Angeles and on and on and on--are identical in land area to our timeline but each one having a population density of five million people per square mile, making each one the macrocosm of the Kowloon Walled City nightmare.

But what point of departure would I need to turn this nightmare into a reality?

1: Just create an area directly adjacent to an existing megacity where there is no law. Then the economics of drugs and no planning regs will do the rest.

This is how kowloon came to be. The area was technically under the jurisdiction of mainland China, but China had zero desire to police it and the UK could not police it as it was not under their jurisdiction. As a lawless mini state it became self-managing.

2: For environmental reasons make it illegal to build outside existing urban areas and then consider the possibility that the climate emergency will make Africa, central India, western China, and the southern US uninhabitable. The massive wave of immigration could result in a 2-4x population increase in the still habitable areas.

3: 2 is still not even close to enough, so we also need uncontrolled birth rates. The problem is always going to be that no current government would sit back and do nothing whilst witnessing a population explosion against the backdrop of climate emergency and no more space, so there needs to be a very compelling reason to still increase the birth rate. How about a virus which we think is going to kill 98% of the population in ten years but turns out to be harmless?

Then there is the matter of how - we need to make the malthusian catastrophe happen, so we need to remove a lot of the features of modern life which prevent it from happening.

Environmental pressure and massively increased birthrate is likely to be the key driver, but you need to get that birth rate up up up! In order for just London to have the correct density you will need 3,030,000,000. That's nearly half the world's current population in just London! Edit: Assuming other cities have the same ratio of population:area, that would make for a total global population of 2.4 trillion

Not to mention feeding them all, but you would at that point probably need to have people hooked up to cybernetic implants which convert solar energy directly into glucose and trace minerals - there is absolutely no way in hell that the planet can sustain that many people using any currently known or theoretically plausible agriculture method.

In fact, transhumanist tech might be the initiator of the second population boom - it bypasses the aforementioned malthusian disaster and allows once again for unchecked population growth. So I'll make that my 4: Transhumanist revolution.

Not the answer you're looking for? Browse other questions tagged alternate-history cities population .

5
Do self-driving cars make more people move to the city?
13
Could a Megacity be a Penal Colony?
2
Generation ship: How big exactly?
5
What's the minimum time that it would take for an advanced species to create an ecumenopolis?
7
What Point(s) of Departure Would the Native Americans Need to Sail Across the Atlantic and Colonize Europe?
7
What would be the best city in the U.S./Canada to live in for a supernatural being trying to exist undetected from humanity?
11
How can a massive walled city be viable?