What would the economy of a nomadic, spacefaring civilization look like? [closed]

For a writing project, I'm trying to break the mould of some others involved and depict nomadic people who travel in enormous colony-ships, searching for life-bearing worlds similar to their own and stripping them of resources before continuing on, descending from refugees who fled into space.

I've been imagining a strong "cottage industry" using onboard, small-scale manufacturing in the colony-ships and a prominent black market beneath a formal barter economy. Would anyone with more expertise, or an interesting viewpoint be willing to chime in on what their economy and perhaps what currency might look like?

FTL is pegged at 32,000 times the speed-of-light; population is around 2 million divided between 40 ships with the majority in one massive carrier which provides food and other supplies to the smaller vessels which perform military operations.

Resource availability is going to have a crucial influence on the economy. How frequently is a planet going to be available? If it is once every 100,000 years then this will give rise to a very different economy to once every 10 years.

Now you appear to be talking about planetary strip-mining, which might mean your ship is planetary harvester or larger type ship. 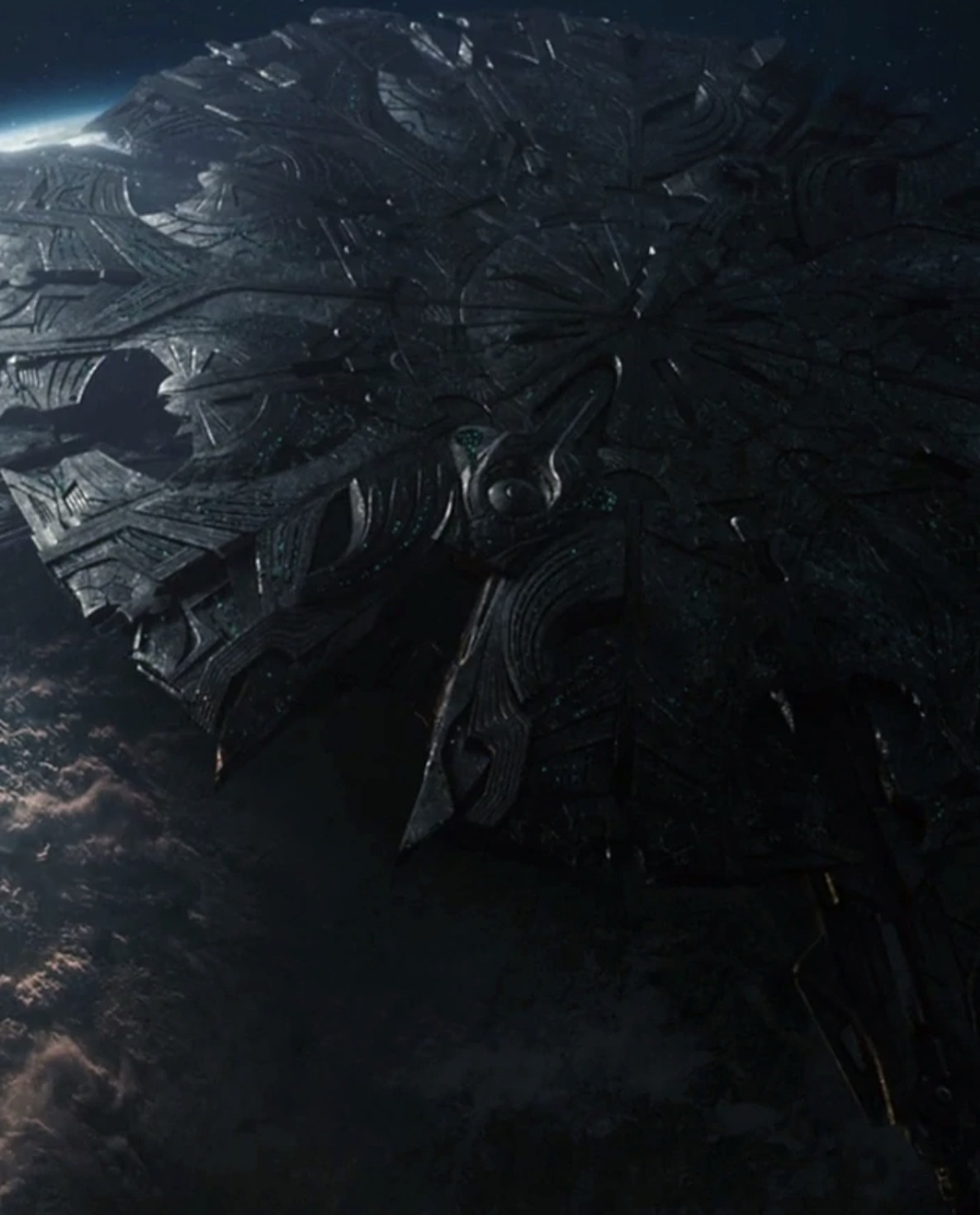 But wait! Another important question to consider is to what extent is your nomadic civilisation capable of extracting resources from a planet? Are they capable of core mining like the big circular dude in the pic? Habitable planets have delicious gooey cores of magnet-forming rare heavy elements so this is could be one such pinnacle of harvester evolution. Or is their tech more primitive?

Another closely related issue to consider is resource / effort tradeoff - if travelling to a planet has a high resource cost then there will be significant motivation to extract as much as possible from the planet before moving on, which will act as a driver for technological development. If they aren't advanced enough to actually strip mine a planet then there needs to be a good reason why, cheap & accessible FTL is a very good reason. Availability of one technogy makes up for not having the other.

So in my view there are two competing extremes:

2: Smaller (but still f*ng massive) planet-hopping ship with cheap FTL and low extraction tech - potentially focussed around raiding already manufactured products from existing civilisations. I have a feeling this is where you are going.

On the basis of this wild assumption, I am going to assume a few more things which in my opinion would flow forth from this technological model.

Okay that's enough I think. In case you haven't noticed I have just been doing my own version of "space mongolia" and I got a bit carried away.

If you want some google leads:

There is a lot more but if you go from there you'll be down a wiki rabbit hole in no time. There is so much to read and not much space here, if you get an idea of how these cultures behaved on terra then I think it might spark more inspiration.

The idea of a spaceship, or even a fleet of spaceships, no matter how big the fleet or the size of the ships in that fleet, "stripping" a planet of its resources is just unrealistic. A planet is huge and a spaceship, any spaceship, is just a tiny speck in comparison.

Then there's the issue of access. Only a small proportion of what is valuable on a planet can be found on the surface. Most of it will be underground. And you can't just go blowing huge holes in the planet and lifting chunks out into space, because most of what you'll be bringing up will be worthless rock. What you'd need to do is dedicate resources to in-depth surveying, careful excavation, and probably some basic-level refinement on the surface before lifting the finished resource up into space. At this point, you may as well just land your spaceships and settle on the planet, because this process will take a while.

If you're committed to living in space however, you're best off giving planets a wide berth and, firstly, making sure you have the best possible systems in place for reusing and recycling whatever resources you already have on your ship(s), and for whatever other resources you may need from time to time to look for them in small packages - interstellar asteroids and comets, and even the layer of space dust that will settle on your ships as they travel through space may contain some useful trace elements. Waste not want not.

As for economic activity aboard the fleet, I think the level of complexity very much depends on the size of your population. This is maybe a matter of opinion, but I think the industrial output of a spaceborne civilisation would be about the same as a terrestrial civilisation, albeit with a few trade-offs. Agriculture would be a much more labour- and energy-intensive activity in space - instead of relying on a nearby sun and a planetary water cycle, you'd need to have a crew of people monitoring the solar lightbulbs and maintaining hydroponic systems - but other forms of manufacturing could have greatly improved productivity in a low gravity environment. Here on Earth a great deal of the energy that gets used in building heavy machinery comes from lifting and hauling heavy parts and components, in space you can nudge and spin, say, an engine block into the chassis of a car, without having to rely on powerful and dangerous hydraulic lifts and winches.

In terms of the broader economic system, I think what needs to be kept in mind is that in space there are no exploitable externalities. Here on Earth, we can take what we find, whether that be virgin land, potable water, breathable air, extractable ores in the ground, sunshine, etc, etc, and convert these through our labour into sellable products. In space, the water, the air, the light, these are all things that your fellow citizens had to work to produce, so the web of interdependency is much tighter than it would be on any planet. As such, by necessity there would be a much stronger role for central planning. You wouldn't be able to rely on being able to access any product you want for the right price - if component X is needed for the air scrubbers, then component X is needed for the air scrubbers, and there's nothing you'd be able to do for love nor money to get hold of that component X.

That said, currency to buy the things you can buy would probably be pretty similar to what we have in our own lives. A barter economy wouldn't exist because barter economies have never really existed, (in the real world, societies have always jumped straight from the "everyone shares resources openly with their community" stage to the "everyone uses a mode of currency to exchange resources" stage without an intermediary "ten chickens equals one goat" stage). What would likely happen is you would have some things assigned to you as a given, a place to sleep, a stipend for basic food supplies, free medical care, because, again, there are no externalities in this society, it can't afford to have a section of its population excluded from the workforce by the consequence of being homeless, starving, or avoidably sick. Above that, you would earn a wage by performing labour, and could use that wage to purchase whatever limited luxuries might be available.

Frame challenge: The most constantly valuable thing is information, always.

So in the situation when you need to travel for years or centuries from star to star, it's the only thing that's worth keeping and seeking. These nomads roam from settled world to settled world seeking to trade for information. Their ships are basically giant server farms, with exabytes upon exabytes of various things stored in them, from that "hello world" program test in this ancient computer language called C++, to planet-busting Death Ray schematics.

They even have a dedicated "digital archeologist" as a profession, since not even they remember exactly what their data vaults hold anymore. You can obtain something extremely valuable from them... if you have some useful information to bargain in return, or if the Fleet needs physical resources currently for repairs or expansion.

17
Interstellar commerce: why would planets be valuable?