What would a bear species isolated on an island look like?

In a science-fiction story that I am writing, there is a species of bears that only live in a specific oceanic island. They are the descendants of American black bears (Ursus americanus). They are my trolls.

The oceanic island where my bears live is smaller than Ireland, but bigger than Réunion, precisely, close to Hawai'i's size. The island has a subtropical humid climate (like New York City, New York, United States of America). The highest point of the island is 1,397 meters (or 4,583 feet if you want) (the same as Mont Pelée, Martinique, Fifth French Republic). There are six environs: three forests, a mountain, and two rolling hillsides. There are many plants and the non-marine animals are mostly insects with some bats, birds (some large, some small, some medium, some flightless, some flying, some semi-flying), and rodents (also, some large, some small, some medium).

If I want to go on a realistic way, would they go through insular dwarfism (like the Flores human) or insular gigantism (like the dodo)? 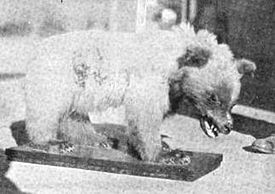 The lava bear (also known as sand lapper, dwarf grizzly, and North American sun bear) is a variety of American black bear (Ursus americanus) found in the lava beds of south central Oregon. The animal was described as a very small bear with wooly light brown fur. The few lava bears that were killed or captured were a little larger than a badger. It was once thought to be a separate species. However, scientists who examined the specimens determined that the animals were stunted due to the harsh environment in which they lived

I here assert that the harsh, resource poor characteristics of your island will produce small, stunted, badgerlike bears. They will be more arboreal than typical black bears, climbing like bear cubs their entire lives.

@T.E.D. asked me to wax philosophical on island dwarfism. Here goes. Islands are just one type of reproductive isolation (but an efficient one) and a reproductively isolated species can stay the same size or get bigger or smaller. I assert larger bodies are useful in the context of lots of resources when the large size allows the organism to capitalize on these resources more efficiently than normal sized individuals of its species. Because there are lots of resources, this is not limiting on body size. Example: Kodiak bear can use seasonally available marine mammals and store resources in its body better (polar bear style). Komodo dragon can take large ungulate prey animals better (tiger style). Dodo birds can eat more seasonally available fruit and store the resources in their large body (turkey style).

If the isolated population is in a resource limited environment, smaller bodies are calorically cheaper to maintain and might allow use of resources that for the species generally are used only by juveniles or used by smaller species. Examples are Sahara crocodiles (eating bugs), pygmy hippos in the resource poor rainforest, lava bears living like raccoons in a desert equivalent.

I do not know if the OP wanted the islands in question to be resource poor or not, but I asserted they were because I want lava bears.

They'd be small, due to Island Dwarfism.

The thing that controls whether you get dwarfism or gigantism is what was the limiting factor for the mainland species. Dodo get big because the main limit on small flightless birds is usually predation. for large herbivores and large carnivores the limit is getting enough food so you get dwarfism.

Black bears are predators so dwarfism is possible, assuming the food is not abundant. But if there are large rodents and ground birds food is abundant, and black bears are omnivores so I would not expect a huge change. Homo floresiensis may give a false impression, as hominids have a very high caloric demand, even then they only reduced to the same size as ancestral Australopithecine. So expect dwarf bears but nothing that drastic, probably something between Himalayan black bears and sun bears.

Prey size is a factor, since we don't know how big the prey is we can't give a firm number, but as predators expect to get no smaller than twice the size of the largest prey item.

As a matter of fact, something quite close to what you want actually exists: the Kodiak bear, which lives on Kodiak Island (Alaska) and adjacent islands. Although it's a subspecies of the brown/grizzly bear (Ursus arctos) rather than the black bear, they're not all that much different. They tend to be larger than their mainland relatives. (Also note that bears are generally good swimmers, so you'd want your island somewhat isolated. https://en.wikipedia.org/wiki/Kodiak_bear

The island rule, also known as Foster's rule: they will be smaller.

Islands tend to make small animals larger (the dodo was a kind of pigeon) and large animals smaller (the pygmy mammoth lived on an island). Bears are large. They will shrink.

Your bears will be either small or extinct.

The territory size of a female black bear is 2.5 to 10 square miles and females do not overlap territories with each other.

By math, your island will support no more than 1100 to 4400 brown bears currently--assuming most of the terrain is able to support bears. A population size of less than 2500 adults is considered "endangered" by the IUCN.

So your bears need to require less resources per bear in order to achieve a safer population level, hence they need to be smaller.

I feel like you are describing the bears of Haida Gwaii?

When a question is scrutinized too intently the obvious can become elusive. The particular attributes of the individual animals in an isolated population that successfully reproduce determines which attributes are available in subsequent generations.

Mere millenia aren't enough to expect mutations to give rise to a significant number of new attributes. That implies that the bears on your island will be gradually reducing the diversity of their genome. Individuals express a subset of their genes in response to their environment. Unused potential isn't lost instantly, or even rapidly, except when its presence reduces reproductive success. Expect the bears characteristics to remain within the available diversity they arrive with.

The answer to the question "do I get giant cave bears or pygmies after 1000 generations?" depends on what effect the size of an individual has on its reproductive success. Its more common for the pressures on an island to favor smaller individuals, but giants like the Irish Elk and the Kodiak Bear result from environmental pressure favoring larger individuals.

In the hypothetical case, the environment is a benign climate with a predictably limited diversity of food sources and habitats. A large highly adaptable omnivore like a bear is likely to be so successful competing for food and habitat that the ecosystem collapses and the bears die off in a relatively brief time scale. An island ecosystem is fragile.

The habitats and species these bears share the island with would be more likely to remain in balance if some sort of an unusual circumstance forced the bears to compete with each other for an exogynous food source rather than exclusively with the other inhabitants for indigenous resources. For example, Kodiak bears compete with each other for fishing spots for the salmon run that is a huge fraction of their annual caloric intake. Its safe to assume that anything indigenous that a bear that didn't fish successfully could eat instead is likely to be eaten.

The argument that a certain population size is needed to ensure adequate genetic diversity is unavailing. Its an anthropic argument, i.e. that some population must be adequate for a species to survive/fail because the species isn't/is extinct. It only works a-posteriori, i.e. after the fact. There were an enormous number of passenger pigeons just a few decades before the last one died in a cage in a zoo. Tens of millions of individuals. That there wasn't anything in their genetic pool that would let them survive the loss of the continuous swath of old growth forests was self-evident after it happened, not before. Environmental pressures determine which individuals survive to be able to reproduce, and mating preferences tend to favor healthy individuals. If being smaller makes an individual more likely to survive and be healthy, larger is less likely to be available in later generations and vice-versa. How many individuals are needed to ensure sufficient genetic diversity for a species to survive some hypothetical environmental upset in the future has no role in the process. The genetic availability of un-expressed traits has no role in the process.

Not the answer you're looking for? Browse other questions tagged science-based evolution geography mammals zoology .