Could there be an atmosphere in which I could both be alive and float?

By be alive, I mean I could survive until I run out of food or water. By float, I mean I can be above the ground with no effort (indeed, I probably couldn't control it.).

First off, there are no gasses which are denser than a human. To float, you need the medium to be as dense or denser than you are. You might be thinking of thick atmospheres on low gravity planets, which might allow you to fly by flapping some attached wings, like on Titan. That atmosphere is not breathable though.

So, in order to be floating in something you can breathe, it would need to be far denser, that means it'll have to be a liquid. There are some proposed liquids that a human can breathe, but an atmosphere usually means the gases surrounding a planet.

This is possible through semantics. You can get loose with the definition of an atmosphere and have a planet covered in a breathable liquid which you call the atmosphere.

Alternatively, you can look into making a gas torus. This is really only an atmosphere (there is no ground), but does allow you to float around in what you're breathing. Check out Larry Niven's Integral Trees for more inspiration. 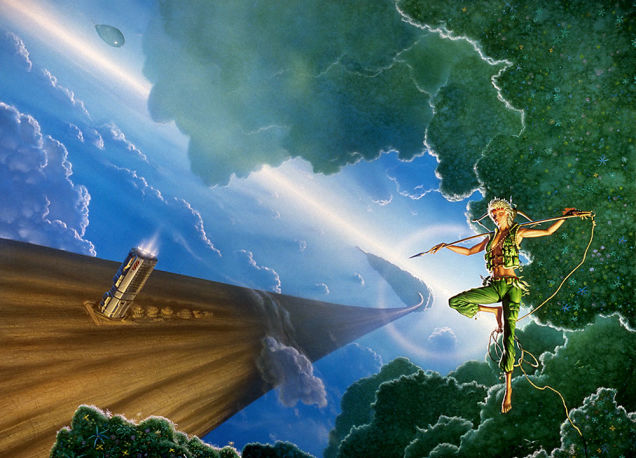 Yes, you can float in air at standard pressure which is moving upwards at around 200kph. It's generally known as indoor skydiving, but you could imagine a world where wind creates this situation.

Using the ideal gas law (pV=NRT), in order to increase the density by 100x, we need the amount N to increase 100x relative to the volume V. R is a constant, so we need to decrease T and/or increase p.

Decreasing the temperature T isn't going to help us much. Going for 30 degrees Celsius (86 F) to 10 degrees (50 F) only increases the density by 7%. Too much colder and we it isn't really survivable long-term.

So basically all of the increase needs to come from increasing the pressure p. However, 100x pressure isn't going to work for you. The pressure itself might be survivable, but there's nothing you could breathe that wouldn't kill you:

It's unclear that there's any gas out there that we can breathe at, say, 100 times the atmospheric pressure.

Unaided, you're out of luck. You'd need a pressure suit and an oxygen supply or a tank of breathable handwavium air in order to make this work.

As Samuel and Rob Watts have explained, there's no atmosphere in which an unaided, unmodified human being can be lighter than or as light as the surrounding “air”. So what does this leave us with?

You could be a modified human being. Given how far humans are from being able to fly, let alone float, the modifications would be extensive.

You could of course be an aided human being. All it takes is a large enough balloon containing helium, hot air or some other gas that's lighter than air.

If neither of these cheats are acceptable, here's another one. If you get rid of gravity, it doesn't matter that you're heavier than air!

All you need to set this up is a confined space with no or very little gravity. The space needs to be confined, otherwise the air will escape. The space will need to contain no masses large enough to create significant gravity. One way to create such an environment is at the center of a large sphere — a hollow planet. No matter how heavy the sphere is, as long as it has spherical symmetry (or close enough), there's no gravity in the central hollow part.

Like all science fiction ideas, it's been done before. One hard-ish example is Karl Schroeder's Virga series. Virga is a world with no gravity (people live in rotating cylinders) but full of air. Due to the lack of metals, technology is mostly pre-19th century, with wooden ships — pirates in space. Humans can “fly” through the world, with or without equipment — but Newton's third law applies, so you need rocket propulsion or some other mass to throw or you'll be stranded in space.

Yes, if you create a universe filled entirely with air instead of relatively empty vacuum. Getting around would be a bit more difficult than swimming, since air has about 1/50th the viscosity that water does, but the same principles should apply in general. Of course, some method of aerodynamic propulsion would certainly be preferable...

Possibly, but instead of modifying the atmosphere change the planets spin.

Here's the idea: the ISS is 'floating' in space, but in reality it is simply falling forward so fast that it does not have time to hit the ground before it crosses the horizon.

See this for the idea.

If the earth rotates so fast that its centripetal force was the same as its gravitational force then everything on that height would effectively float.

Precisely, it would be as if we were on orbit even at ground level.

I think it would be hard to keep the atmosphere attatched to the earth at that point though, like Mars cant keep its own because of its own gravity, but if you had a dome around the atmosphere it could still work.

Most planets tend to slow down though, not speed up their spin.

Another idea that wasn't covered by the previous excellent answers but was mentioned by @Mikey in the comments.

If you built artificial habitats on some of the moons of the solar system and included large domed areas with STP atmospheres, a human body should be capable of direct flight. Just add wings and start flapping.

Another thought: if you engineered an atmosphere for the Moon, it would not remain for geologic timescales but it might be fine for habitat over human timescales (100,000 - 1,000,000 years). My theoretical + empirical spreadsheet of Solar System bodies indicates a half-life for gaseous $H_2O$ of around 100,000 years - longer for the heavier $O_2 + N_2$ molecules.

Could be a fun world to play in.

Similar to the Integral Trees, you also achieve this by having a hollow planet (or space station). If gravity is low enough, or you are near the center of gravity this can lead to being effectively weightless allowing for suspension in atmosphere.

Setting aside for a moment whether or not it's possible to find a gas that can be compressed to the density of a human without undergoing a phase change, suppose you are neutrally or nearly-neutrally bouyant in some fluid. The fluid has your density or higher.

Firstly, your lungs will struggle to move the fluid in order to "breath", since more force is required to shift a larger mass of fluid. That's a problem but it's not necessarily instantly fatal. Secondly, any significant "depth" of such fluid will have very high pressure on a planet, since there's a lot of weight of this stuff above you. Divers in water (approx same density as a human) can go to to a few hundred meters maximum in Earth gravity.

Hence, you need to look for micro-gravity situations (where everything "floats" irrespective of density), or else for environments where there isn't miles of fluid above you (so, not really an "atmosphere" worth the name). If we're not allowed a roof, then perhaps a small body with low gravity, and some kind of atmosphere-generator, would be sufficiently "floaty" even though really you are much denser than the atmosphere. You're sinking, just at very low acceleration. You'd have to think this is inefficient, though, since without a roof the atmosphere on a low-gravity body will be leaking into space.

As for whether a fluid you float in can even be a gas rather than a liquid: it doesn't seem likely that any gas could have a density close to that of a human, without being at such high pressure that a human can't survive.

Of course hand-wavium is good for a lot of engineering applications, but it doesn't qualify as "hard science". If you just assert the existence of a non-toxic gas that's 20% denser than water at standard temperature and pressure, and mix it with 20% oxygen, then you'd float in it and breathe it (albeit with increased difficulty compared to air). You'd also have to explain why the oxygen doesn't all float to the top. And for the reasons above to do with weight of fluid above you, the atmosphere would have to be a lot shallower than Earth's, or the gravity far weaker, or some combination of the two.

Now, if you're willing to consider a "liquid atmosphere", then you're in business. Just grow gills, use water (which will need to be oxygenated somehow) and don't go too deep into the "atmosphere" (or as it's more typically called, "ocean") ;-)

Not the answer you're looking for? Browse other questions tagged hard-science atmosphere flight .

16
What can we do to Mars to give it a survivable atmosphere?
12
Could life exist in a circumstellar disk?
2
Floating ships on dense clouds?

2
Shinespark-like effect with a jet engine
6
Could there be an upside down hurricane on a gaseous super-Earth
32
How would one attack or lay siege to a flying castle?
9
What gases could be present in a viable atmosphere for humans?
4
How does composition change if you extend an Earthlike atmosphere 50km below sea level?
7
Vacuum airships
2
What size/distance a planet should be from its star to have a dense atmosphere and not become a gas giant?
5
What is the largest achievable oxygen-atmosphere world?
2
How can we make a dense atmosphere allowing floaters, that would be toxic for humans to breathe?