Can a localized distortion in space time increase or decrease gravity?

Suppose a wild mage appears with a spell that distorts space time, planning to increase gravity in the area. Inside this 2 meter diameter sphere of distorted space, could gravity be higher inside but not outside? If yes, just for scaling, how much 'energy' would be necessary to distort that portion in general terms, e.g, the yearly output of a star?

Edit: To rephrase the question, if someone were to distort space time with their intent of increasing gravity in a small, 2 meter diameter spherical area, by mystical means instead of the natural way, matter, would a localized distortion be enough to do it without affecting the rest of the planet or would any increase of gravity enough to have a difference affect the whole system?

Space is distorted by mass

It is often said that mass and spacetime are linked. Mass distorts spacetime. Although one could argue mass doesn't and it's just energy/momentum that distorts it, or gravity itself. Still we can see that around any mass it's distorted and gravity is in effect.

Let's put that further in perspective, as it's difficult to see if this is absolutely massive (spoiler, it is), or the equivalent of a Chinchilla breathing.

It needs to be seen in astronomical sizes, so it's not an easy feat... 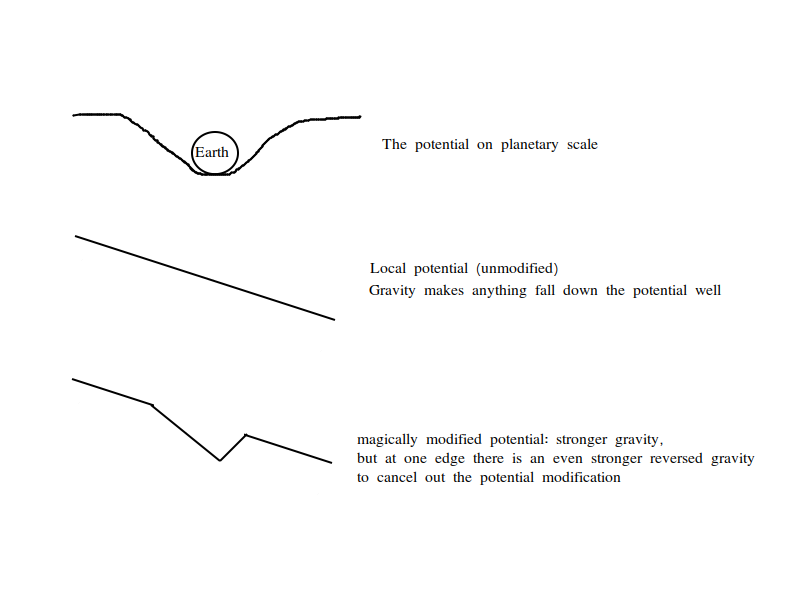 I have no idea how gravitational potential modifications translate to energy, but theoretical descriptions of warp drives (that also work by modifying spacetime) often talk about thousands or millions of times the energy output of the sun.

Disclaimer: I'm now talking about things I know just barely enough about to be dangerous, so this is very speculative.

Potential energy of objects inside the AOE

Then there is the matter of creating the magical potential well. The gravitational potental energy of an object is the difference in the gravitational potential between where it is and the 'ground' ('ground' is just an arbitrary reference potential). So if you were to increase the potential in a certain area, you would require energy to increase the potential energy of any objects in that area. In the drawing above the potential is lowered, which would in fact liberate energy when produced, but cost energy to undo. If we are talking about a 2 meter sperical area of influence and an additional 1 g of gravity (on top of regular earth gravity), the energy needed here would be the energy you need to lift whatever is in the area of influence by up to two meters. If it is just air, that's very little. If it is underground that can be quite a bit by human standards. But if this is a problem you can always change the potential in such a way that the average level of the potential doesn't change. I.e. you increase the potential in part of the area and decrease it in the other part, such that the potential energy increases and decreases cancel out.

How to manipulate the potential

Next, there is the part of actually changing the gravitational potential. The only way to do so according to our current theories is by having mass clumped together (and mass and energy are equivalent for this purpose by E=mc┬▓). You probably don't want an actual sphere of something sitting there, so let's use dark matter. Dark matter is theorised to be a form of matter that only interacts with regular matter through its gravitational effects, but otherwise it can move right through ordinary matter without affecting it in any way. If you magically create a ball of very dense dark matter, that would gravitationally attract anything close to it. However regular matter always has positive mass, and thus its gravity is always attractive. And also, the area of effect of a ball of dark matter (or any other mass) is infinite, though the force becomes smaller and smaller on anything far away. To contain the effect to a local area without influencing the space outside it, you also need negative mass dark matter, which will have a negative gravitational field. Negative mass matter is not something that is known to exist, but general relativity does not exclude its existence. For a local modification of gravity you will need equal amounts of positive and negative mass matter, so that at a long distance their effects cancel out.

Conjuring up any form of matter from nothing requires a lot of energy, because matter is energy by E=mc┬▓. But conjuring up negative mass energy actually requires negative energy. So conjuring up equal amounts of positive and negative mass matter in theory doesn't require any energy at all because the energy budgets cancel out, other than any 'inefficiencies' in the conjuring process.

The mage doesn't need to conjure up the needed dark matter any time he wants to distort spacetime, he could just have a bag with some amount of positive and negative mass dark matter with him. Then he just needs to distribute that dark matter in whatever way he wants to build any gravitational field he wants.

Keeping the dark matter in place

One remaining detail is that dark matter, like regular matter, doesn't stay put if you just place it somewhere. It will fall down, or clump together due to its mutual gravitational attraction. And it won't stay put on the ground either. Because dark matter doesn't interact with regular matter it will fall straight through the earth. So the mage needs some way to make the dark matter stay put. Fortunately keeping something fixed in place doesn't require any continuous energy input either. When you stand, your feet push down on the earth, and the earth pushes back at your feet. This normal force (as it is called) counteracts gravity, all without consuming energy.

There is another alternative to magically putting dark matter in place. Nobody knows what dark matter actually is. It is for the most part just a theorised concept, and there are many theories on what dark matter really consists of. So you could take some liberty here and make your dark matter behave like regular solid matter, i.e. as blocks that can be bolted together with DM-bolts. The dark matter would interact with other dark matter like ordinary solid objects do, so the mage could build structures out of it in order to distribute the positive and negative mass DM in any way he wants to. Such a DM structure would be invisible and any ordinary matter could move straight through it without feeling anything (other than the modified gravity). So the DM can keep itself up in any configuration that the mage builds.

Then the only thing still needed is a magical anchor that anchors the DM structure to the earth, so it doesn't fall through the earth, and of course the mage needs a pair of magical gloves (or use his wand, or whatever) in order to actually manipulate the dark matter blocks and bolts and nuts. The gloves in fact have to be magical power gloves, because the DM blocks are extremely dense and weigh billions and billions of kg (positive or negative) per block in order to have any appreciable self gravity.

Well, that ended up being quite a writeup. But I think this is actually a pretty laws-of-nature compliant way to do what you want, and it doesn't even need to cost that much energy, though you could make the magic itself be arbitrarily expensive if you want to.

Not the answer you're looking for? Browse other questions tagged science-based magic gravity .

2
Supernova Rifle
6
How does space between ends of a wormhole work?
5
Is it possible to have a civilization in the core of a planet?
11
How to increase a moon's gravity?
2
Slowing time, slows gravity?
3
Effect of time distortion on light