Oscillating orbit: how to produce one in the real world?

This is unabashedly stolen from this recent question:

What would be the structural impact of an oscillating orbit on a planet?

with its sweet sweet gif

Around this white-hole stands a telluric planet, quite similar to Mars in terms of composition and orbital characteristics, excepted for one thing. Due to some yet-to-understand space history, its orbit is crossing 8 times the neutral-line, as it is oscillating from and to the pull-zone with contrary forces. It forms a pretty star-like shape, as you can see in the toy model I made1 below

The red planet's orbit forming a star-like shape around the white star-like body.

My question: what force could produce an oscillating orbit like the one shown?
The references question wants to know effects on the planet. The force causing the oscillation is handwaving force. But I want to know if such a orbit is possible. I was thinking about both bodies being charged and an induced magnetic force. I was thinking about diamagnetism.

I am not committed to this being a planet and a sun. Any sinewave orbit is ok but the answer has to explain why.

The simplest solution would be to have a twin body orbiting. The terrestrial planet has a companion - it could be a micro black hole. The common center of gravity follows an ellipse, but the two bodies follow two epicycloidals. 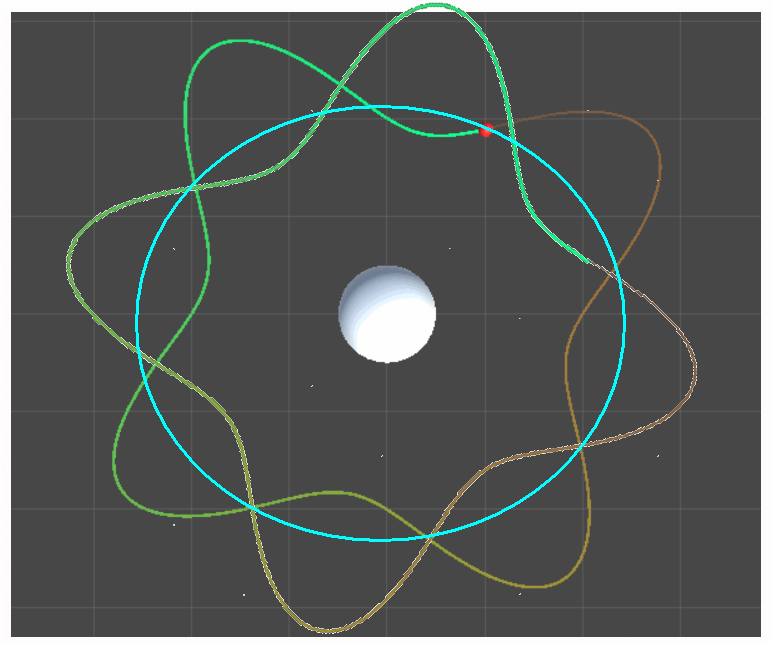 Any force that is attractive at some distances and repulsive at other closer distances would be able to produce such orbits. As for how to get such a force on Greg Egan's webpage on Orthogonal

The planet is orbiting another massive object, which is itself orbiting the central mass. The two periods are in resonance, which gives you the shape shown.

The terrestrial planet could be orbiting a hypermassive remnant of some kind, so it's actually much larger than the gravitational primary and the inhabitants won't see a huge globe in the sky; might not even know it's there until they develop technology.

This is a special case of a Rosetta orbit. In general relativity, Newton's inverse square law gravity is only an approximation, and in very strong gravitational fields, such as the region just outside the event horizon of a black hole, the orbits are no longer closed ellipses. They instead form a curve called a hypotrochoid in which the orbit "oscillates" radially in a similar way to how you describe. The wiki page on hypotrochoids shows an example that forms a closed five-pointed star.

I'm not totally sure whether a hypotrochoid like this could actually arise as a black hole orbit; it may be there are limits on the parameters allowed that exclude it, or render it unsuitable for life. For a distortion this large, you'd have to be close, and the tidal forces would be fierce. I suspect any reasonable real planet would be torn apart without copious supplies of handwavium. (On the other hand, milder tidal forces would provide a handy source of heat to stop your dark planet turning into a frozen ball of ice without a sun.) And it would in any case require some extreme fine-tuning to get that closed orbit that speaks of a deliberately engineered planetary system, rather than a natural occurence.

Explaining why it has this form would require general relativity, but you can probably see that something like it is intuitively reasonable if you start with an elliptical orbit, and then think about how the black hole's gravity distorts times and distances more strongly when it is close in than when it is far away, giving it a boost of speed at one end of the ellipse and slowing it at the other. That causes the ellipse to steadily rotate.

Actually, it's assumed that most planets already do this. It's called an epicyclic orbit, and comes about when either the planet is radially displaced in some way or the mass of the central object changes. 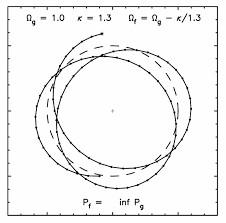 Granted, the effect is much smaller for most planets than in this diagram, but there's no reason that you can't hand-wave your planet having a much larger epicycle. I'm much more familiar with it in my field of Galactic astronomy than in solar systems, but I can't think of a physical reason why it's forbidden, just unlikely. 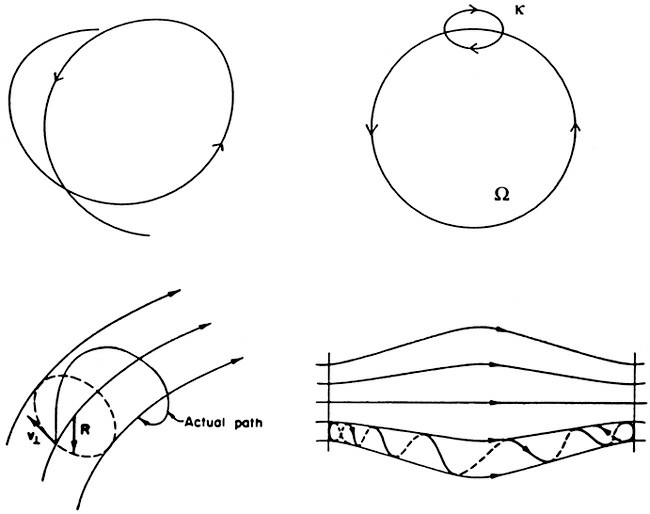 This motion causes the planet to oscillate on a small ellipse on top of its orbit, which causes those star-like orbital patterns that you show in your example.

As for what could generate this orbit, I would suggest a large asteroid striking the planet head-on at early times, causing this perturbation on its orbit. Once the orbit is perturbed, it will stay perturbed for very long periods of time, since it's difficult to shed energy/angular momentum in star/planet systems. If you want the orbit to be even more stable, make this planet the only one in the solar system, since that's the main thing that will "even out" your orbit over time as far as I know.

Another possibility is that the star that the planet is orbiting gained or lost mass very rapidly in some way. This would cause the planet to be moving too fast or too slow for its orbit, and would cause an epicycle to occur. This is the process that is thought to actually generate epicycles in the orbits of disk stars, like the Sun.

EDIT: The processes I suggest would result in an elliptical orbit (which is technically a circular orbit with an epicyclic period half it's orbital period), but wouldn't generate the desired orbit above. For that I believe you will need extra bodies or diffuse mass distributions.

This star is a hydrogen fusion star only in its outer shell. Its core is composed of an exotic form of matter which rotates through a higher dimension, such that periodically (some of) its mass gravitationally disappears from our universe, allowing the orbit to expand. Soon afterward and before the planet can settle into its new orbit, the mass returns.

There would be side effects. The diameter of the star fluctuates with the same period as the orbit of the planet and thus so does its brightness/temperature. Unfortunately, the star gets hotter as the planet gets closer, so rather than balancing out any climate concerns this exacerbates them.

This is fictional physics, and there's no evidence that this is possible in the real universe.

If the planet has no atmosphere, periodic strong volcanism can act as a booster, increasing or reducing momentum and producing the oscillating orbit depending on where it happens with respect to the direction of motion.

On a small scale this happens with comets, where the effect of differential gas emission due to exposure to sun light slightly alter their orbit.

Two of Saturn's moons are particularly strange. Janus and Epimetheus have the unique (in our solar system, at least) distinction of having nearly the same orbit as each other, interacting with each other in a complex dance but never colliding. One orbits slightly closer to Saturn than the other. A closer orbit is slightly shorter, so the inner moon eventually catches up with the outer moon. Once they get close enough to gravitationally interact, their mutual pull on each other will accelerate the inner moon and slow down the outer moon, causing them to essentially swap orbits.

The mathematics behind Janus and Epimetheus result in an orbit swap every four Earth years. If you can play with the numbers (relative masses, distances, orbital periods, etc) such that you get four orbit swaps per local year, you'd have a star-shaped orbit resembling the image in your question.

This mechanic requires the two object's orbits to be very close to each other during both swaps. That means the overall amplitude of the "wave" in your orbit will be a very small percentage of the mean orbital distance (otherwise they'd drift too far away from each other to interact). That's probably good if this is an inhabited planet, since large swings in orbital radius can create hyper-extreme seasonal changes or move the planet out of the habitable zone entirely.

Not the answer you're looking for? Browse other questions tagged orbital-mechanics .

6
Celestial arrangement for the Cube World
18
How short can Milankovitch Cycles be on a world with a stable orbit?
4
Describing a planet on a comet like orbit
8
Can I arrange my stars in a tetrahedron?
9
Planet with big axial tilt, but very close to its star
10
Moons in Binary Orbit
2
The major effects on the habitability of exomoons orbiting this Brown Dwarf
12
Delta-v budgets and modified gravity