Fire from the sky

When the skies release a column of fire, the land around becomes a barren place...

Can such phenomenon be explained with some rare, but "closely possible" circumstances? I don't think about lightnings/meteors here, rather about something lasting a bit longer (at least some hours). I thought about several things like a combustion of stacked flammable gas pushed out by pressure changes or describing an abnormal activity related to higher parts of the atmosphere, but all that still sounds too abstract to me.

Of course there is no need to take the sky part literally, it'd just look alike.

I don't mind including some magic if it's necessary, but you know, it's all about not making things too boring. :P

Xzenbob set the laser transmitter power too high when sending a message towards Earth.

The message was a simple one, a message of peace, but Xzenbob was not a skilled technician. When Xzenbob set the power level for the laser communication system, it should have been set to interstellar, but it was set for intergalactic. When the message finally arrived on Earth it vaporized the atmosphere in a wide column stretching down from space. The shear amount of data and the repetition that was included made the transmission last for hours.

Alternatively, instead of communication this laser shot could be an errant mining laser pulse or a badly aimed laser burst from a distance space battle.

There are two real ways this could happen - the first is an asteroid strike which would have lingering affects even though the initial impact was quick.

The second would be some sort of large release of buried gas (for example there are massive quantities of methane and other dangerous gasses trapped in our continental shelves). That methane if it were released would be bad for anything that needed to breathe, and also highly flammable and possibly even explosive.

We may never know how such a complicated compound formed in the depths of space, but there is no denying that it happened. No one who survived the fire rain will ever question that.

It took months for the scientists to discover the cause, but eventually it was proven. Earth's orbit had intersected a space-born river of asteroids, millions of golfball sized rocks, each composed of a substance, very much like thermite. They streamed down upon us for hours. Igniting as they fell, from the atmospheric friction and each other's conflagation.

We screamed, and ran, and burned.

When it was over, our once fertile fields were a plan of volcanic glass. From horizon to horizon, our once beautiful land had become a scorched, lifeless wasteland.

We shall never forget the night that the fire fell from the sky.

Of course it's possible, it even exists and is caught on tape. 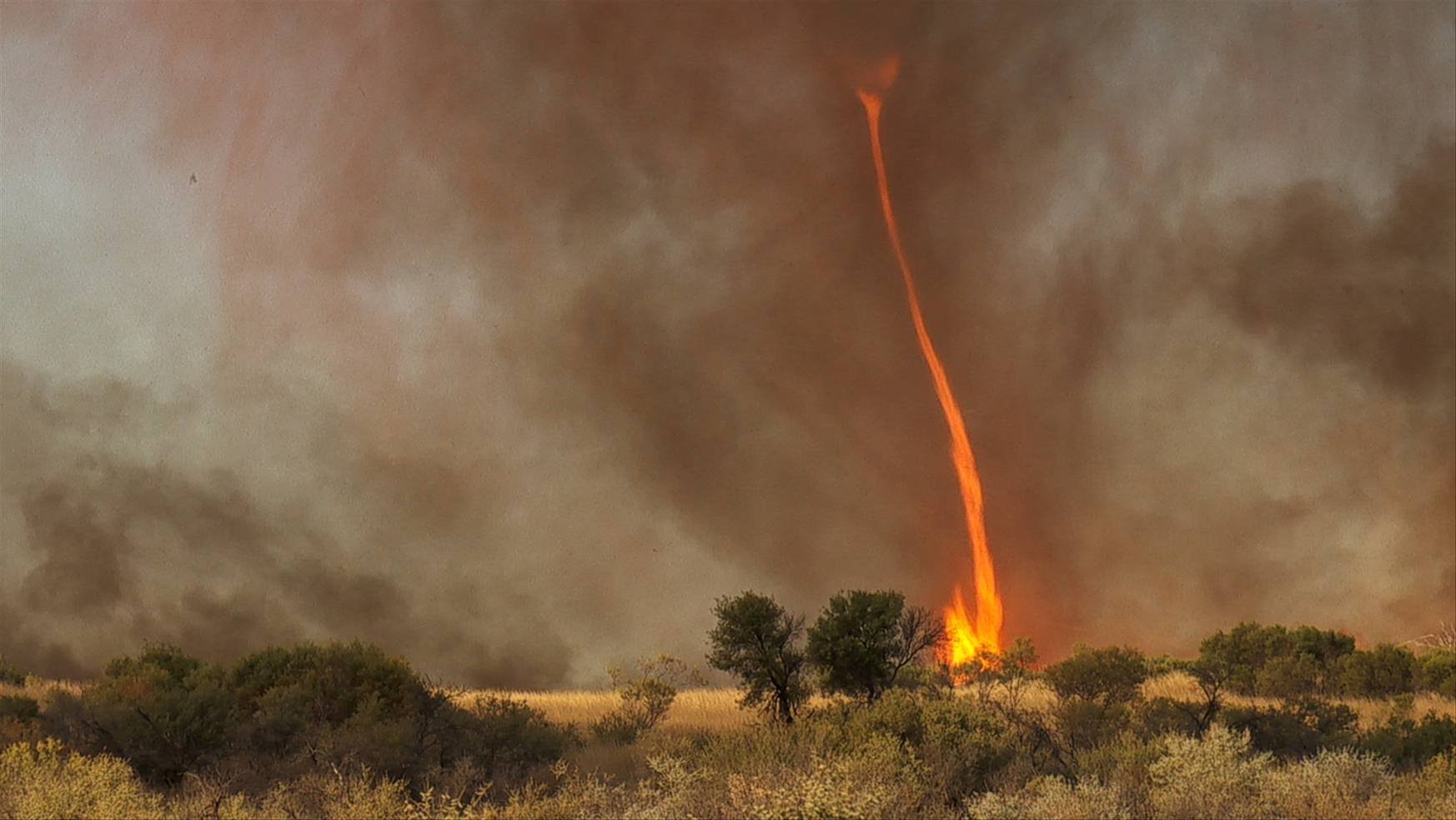 They usually start with a whirl of wind or smoke, and may occur when intense rising heat and turbulent wind conditions combine to form whirling eddies of air. These eddies can contract into a tornado-like vortex that sucks in burning debris and combustible gases.

They don't come from the sky, as stated in a comment, but you said in your question that it should just look similar. So that's what you're looking for.

A volcano comes to mind immediately. Ever seen photos from Mount Pinatubo?

Yes, assuming you magic up the right substance.

The substance needs a few properties. It needs to evaporate to gas and condense back to liquid roughly at the same temperatures as water, and it need to be flammable and burn slowly only when in liquid form, not as a gas. In large enough quantities so that it can form clouds in the skies.

When there is a thunderstorm, the lightning will ignite the raindrops. Due to burning slowly, will appear as the sky releasing a column of fire, and the land below become a barren place.

Depending on your needs it can be a one time event consuming majority of the substance, or a regular occurrence as the liquid otherwise doesn't interfere much with the environment. High ignition temperature would prevent random infernos after rain, as only lightning ignite it naturally.

Not the answer you're looking for? Browse other questions tagged atmosphere fire .

5
How to create fire from "nothing"
9
What is the color of Venusian sky 50km from surface
3
The Elusive Man's Private Fire Department
1
Fire on different oxygen density
1
Where would wind blow away the smoke from a giant fire?
5
How does my spell ignite the sky?
10
What's the useful range of atmospheric oxygen content for fire?
6
Could one create solid rock from dirt using fire?
3
is there any way to make an earthlike planet (aside from the atmosphere) have a green sky at noon and a pink sky at dusk
3
Fire/Flame bombs vs plate armor