I've mentioned Leafmaw in many questions now, but now I realize the need for Leafmaw to have their own question. Leafmaw are round, blobby creatures that mimic bushes or piles of leaves, eating whoever jumps on them or gets too close.

Stated more clearly, a Leafmaw is:

This suggests that they are very amorphous, but Leafmaw aren't just blobs. When unconcerned about camouflage, Leafmaws extend spike-like "legs" from their underside and move as pod-like, leafy lumps of flesh, with their teardrop-like red eyes (their eyes look like a crab's) and fang-shaped "roots" extended and their oral cavity open.

Additionally, Leafmaws hold their selected shape surprisingly well; while posing as hedge walls, people have pushed on them and found them surprisingly unyielding, comparable to a brick wall. (If bushes of such toughness aren't natural, rest assured they do exist in my setting and are used for hedge mazes.) When landed on (by test subjects with a Blessing of Repulsion to make them seem inedible), Leafmaws yield slightly under the person's weight, just enough to be convincing.

For example, if a Draco Lizard were to attack and kill a fruit bat on its way to a nice orange, it would gain bat-like wings and the ability to fly as well as a regular bat. This works because A) it has the necessary biological framework and B) flight is similar to gliding, a trait the 'predator' possesses.

So, since magical creatures need a biological basis, What Creature Could My Leafmaw Have Evolved From? 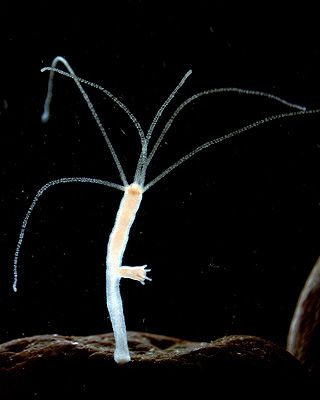 That's right, I'm bringing aquatic animals to land again, but bear with me for a bit as I explain why a hydra could potentially be it's [great elevated to the 10th potency] grandpa.

You see, the first 2 words that came to mind when you spoke of a softish predator that is great at camouflage were land octopus. However, this idea immediately fell down the second you said:

their mouth appears right where the person would land, which means Leafmaw can shift the position of their oral cavity.

This single trait of a leafmaw pretty much eliminates most animals from the candidate list. Any creature that has some kind of skeleton usually has some defined form, and even those who lack a skeleton usually also aren't totally amorphous, but rather being simply a lot more capable of temporarily changing their shape.

Now, breaking down this troublesome ability: what does it mean to be able to "spawn" a mouth whenever you want? Well the mouth is usually not alone, and any creature that doesn't engage completely in intracelular digestion usually has some kind of stomach linked to said mouth. Therefore the creature isn't simply making a new mouth, it's making every single section of the digestive system that precedes the stomach on the fly...unless it works like a hydra.

You see, hydras have a peculiar trait where they seal their mouths shut by regenerating the opening whenever they close it, only to tear the region open whenever it needs to eat something again, working similarly to your creature, except that your creature can either also seal and rip apart a new pharynx and esophagus whenever it's time to eat or already has several pre-determined openings to choose from whenever prey is too close, and either one suggests some weird arrangement of the remaining organs, especially in the first case (except that if it truly evolved from a hydra it probably only has a stomach to worry about as they don't really have an actual brain, or even true muscles). The fact that they lack a skeleton, can essentially "stretch" their body to an extent and can also retract both their tentacles into nubs and their body column into a sphere like shape also helps us see some sizable similarities with your leafmaw.

So let's see what has been and is yet to be checked for this to actually work:

Now the one things that bug me a bit:

When unconcerned about camouflage, Leafmaws extend spike-like "legs" from their underside and move as pod-like, leafy lumps of flesh, with their teardrop-like red eyes (their eyes look like a crab's) and fang-shaped "roots" extended and their oral cavity open.

If they're amorphous, how come they have a very defined underside region? And if the oral cavity can open in any place of its body why would they tear one open for no reason (regenerating an opening isn't exactly cheap y'know?)?

And while hydras have no spike like legs they do have tentacles which they actually use while moving around, the main problem being that they have no eyes despite being able to react to light.

How would it evolve though? I have zero clue, and I'd dare say it wouldn't. Even though hydra can tear open their mouths and seal them after eating, they still have only one mouth, and that is also seen in several other animals around the globe. Furthermore, while it's likely not impossible, for a very tiny cnidarian that lives in freshwater and has a single mouth to grow into a very large land dwelling creature with a good brain (so it properly understand and mimic its surroundings), octopus-level camouflage and the ability to open a mouth wherever it needs whenever it wants sounds like too big of a stretch without relying heavily on a magical force mutating the original creature to the point "unrecognizable" is an understatement. It'd make more sense to say they had been created as living traps by some kind of alchemist.

One way to fix this is to employ 3 basic things:

To better illustrate the changes I'm suggesting in their behavior and abilities, here's a sketch on how it could look like when compared to an actual hydra: 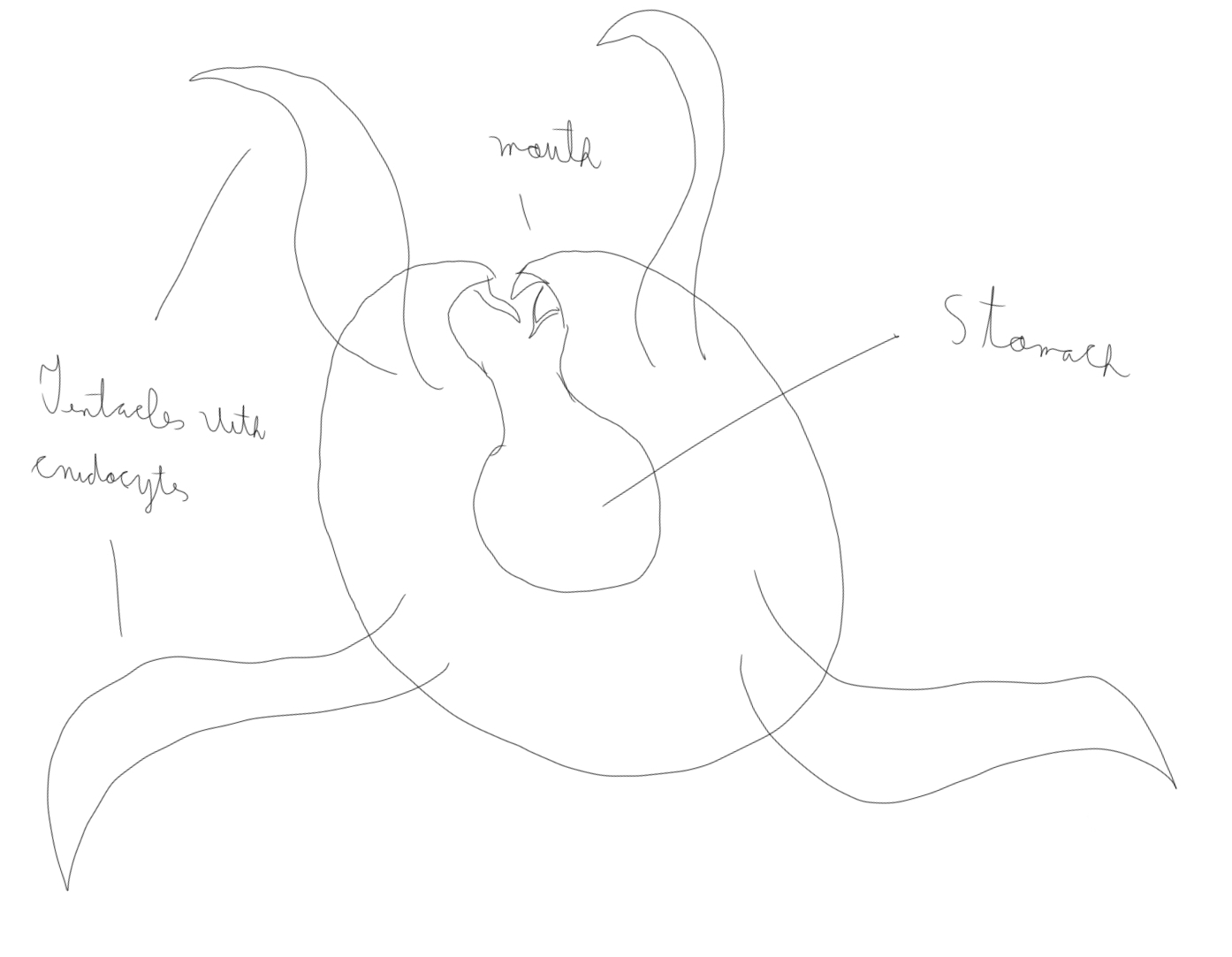 With my lack of ability to make good-looking sketches made apparent, your creature could rely less on a fast act of engulfing prey and more on the special hunting method of cnidarians: cnidocytes.

Before I continue, I'll already say that it'd probably be very tough and require a few millions of years (assuming it'd be enough) for a hydra to actually become an animal similar to the leafmaw even if it didn't need to leave the water, but with the power of handwavium and magic, we can assume it acquired a third germinal layer (the mesoderm) and ended up following an evolutionary path very similar to an octopus', with the magic helping it both to evolve the necessary traits and to manage to move to land (so technically it's not a land octopus, it's a jellyfish-like creature that has several similarities with octopuses due to magic-aided convergent evolution). This also opens the possibility of a more centralized nervous system and more development digestive track, helping out with nutrient absorption.

Now, how could the leafmaw be made a little more plausible and potentially much more terrifying? Well, now as we stand we have an land-octopus like creature that evolved from a hydra, having a property developed brain, 1-2 "rings" of tentacles (one near the mouth region and the other near the opposite end of its body, if you want it to exist as something like roots) as well as several smaller tentacles in the surface of its skin to further aid in mimicking its surroundings and for predation. Now here's how the hunting could work:

1-it finds a suitable location and lays down, changing color and shape to match its surroundings and having its mouth facing the sky, sealed.

2- it waits until a victim comes by and either lays on it or gets within range. For this point we have 2 potential successful hunting outcomes:

3a- if the creature lays on the leafmaw it immediately makes use of the cnidocytes on its leaf-like appendages. The venom is very fast acting and induces paralysis, leaving the victim lying helpless on top of it. Once the leafmaw confirms it won't be distributed, it extends its tentacles, injecting an additional dose of venom and grabbing the victim while gently placing it on its now wide open maw. The victim is usually still alive and partially conscious at this point, but unable to do anything as the powerful tentacles place it inside the mouth on the way to be digested.

3- if the creature gets close enough but shows no sign of laying down, the leafmaw rapidly extends its tentacles, wrapping around the victim usually around the limbs and neck region, with the fast acting poison quickly ensures that the prey stops struggling. After that, yet again the tentacles gently lift the victim and put it within the maw to be taken to the stomach for digestion.

This hunting strategy still works when the creature is camouflaged as part of a wall, preying on whatever lonely being either leans on it or gets close enough for it to strike, except with maybe its mouth not being oriented towards the sky.

While this new approach doesn't really allow for the leafmaw to keep its special ability of making a mouth wherever it wants one as you'd like, it tries to compensate by giving them potent venom and making them a bit more believable, more plausible to evolve and potentially a lot scarier (admit it, you'd rather jump on a pile of leaves just to see a mouth and then black right after than lay down in one just to realize that you suddenly can't move and that you're being effortlessly placed in said mouth).

So summing up: I am aware that I technically cheated a bit since didn't start off with a master of disguise, although even if we were talking about an octopus, cuttlefish or other cephalopod (and no, I would definitely not have talked about lizards or arthropods that mimic plants and leaves because their camouflage isn't nearly as dynamic, with your question essentially limiting the scope to mostly cephalopods) , I'd still suggest a very similar creature with similar hunting strategies, with the main difference that in here the presence of venom injecting cells on the tentacles mimicking leaves makes it a lot more convenient to trick those too naive to play around with random leaf piles in the woods.

Because sometimes real life creatures can be scarier than movie monsters depending on how big you are.

17
Feasibility of giant flatworm people
12
Could you make Bat wings shaped like the different kinds of Bird wings?
34
Anatomically Correct Succubus
4
Adapting Chompers For Land and Sea
5
Explaining Dragons
5
How Could Giant Caterpillars Come to Prey On Leafmaw?
0
How Can a Creature With Rock Armor Also Have an Inflating Head?