Would my character actually be able to use her "Waterbending" power to swim faster?

So, I have a character who has the ability to alter the velocity of any liquid water less than three inches away from her body, accelerating it in any direction she likes. With concentration and practice, she can make different parts of her body push the water around them in different directions from each other, and if she makes the water flow across her body (such as from one outstretched arm to the other), she can give it more time to accelerate before leaving her power's field of influence.

One thing I had planned for her to use this power for is to basically propel her through the water to allow her to swim really fast, basically using the water she "waterbends" as jet thrusters. The problem, I just recently realized, is that she isn't actually pushing on the water in any way. She's just magically accelerating it, so there isn't any equal and opposite reaction pushing her in the opposite direction. So that makes me think that perhaps she can't actually swim faster by propelling the water around her in the opposite direction she wants to go, and because of that, I'm starting to think her power would actually be useless for trying to swim faster at all.

Am I wrong? Is there any way this character could use her water-accelerating power to propel herself through the water?

She just has to direct all the water around her to go in the direction she wants to go. She'll be taken along with it automatically; the water behind her pushes her and the water in front creates a lower pressure region which pulls her.

The important thing is whether the magical acceleration is relative to herself or relative to a rest frame.

In the second case, she can encase herself in a "water bubble" and accelerate the bubble however she wants. If the water needn't be in contact with a larger body of water, then she can shape a large freesbee-shaped flying saucer and zip around on it. This sounds a bit too easy to me, though.

In the first case, this won't work, but we can use three different methods.

One: she submerges, and magically accelerates the water in front of her so that it parts, going backward, at the same time forcing the water all around to stay still. This creates a suction that will move her forward. New water will flow in the acceleration zone, and be expelled backwards.

She is essentially "paddling" with a large tube-shaped invisible magic oar.

If she can continuously shift the magic from the water being expelled backwards to the inrushing water, and keep the outer water "funnel" stable, then she can create a magical hydroturbine with a maximum theoretical speed of Mach 4.4.

Two: she accelerates several pencil-thin jets of water inward and in front of her. The water doesn't give her momentum, but it immediately mixes with the remaining water all around, creating a current. She can swim in the current.

Three: she creates a magical water torus with herself in the center, with the water rushing in from the direction she wants to go. The water in the torus rotates like this

This magic "smoke ring" in the water has a turbulent surface on the inner border. This will force other, normal, non-magicked water to be sucked in and expelled, as if from an impeller, which again will allow her to flow forward at a significant speed (bringing the magical torus along with her, and experiencing no drag from it because magic - the same lack of action/reaction that prevents her from exploiting a water jet now plays in favour).

This is possibly easier to do, concentration-wise, because the impeller can be made of the same water continuously rotating (there is no need to continuously re-magick new water). It is not too different from creating a pair of invisible propellers out of magicked water and having them rotate.

The whole volume in which the torus and the swimmer are immersed can be imagined as a "physically consistent and law-abiding black box", wherein water is sucked from the front and ejected at speed from behind. Therefore, the whole volume is propelled forward.

A similar effect, requiring more control, would be to create a zero-acceleration ovoidal shell (so, a shell the water cannot go through - made of water and magick instead of metal, but still a submarine shell). At the front and at the back there will be two "holes" in the shell, and water would be accelerated inside the first and outside the other, creating a MHD (MagickalHydroDynamic) drive setup. 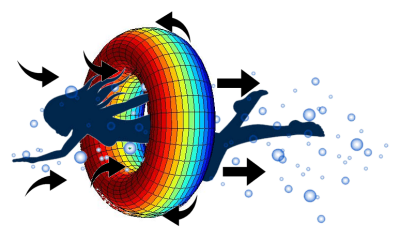 If she tries to swim in a body of water really fast, she has the problem that she will eventually cavitate. There is no such limitation in air.

This way she will definitely accelerate herself significantly. The water is pushing her, not her pushing the water.

So fun fact of water: It has the unusual chemical property at being at it's densest in it's liquid state rather than it's solid state (because solid water forms crystalline structures) so it's a good substance to use to propel objects through water. Things like Jet skis, will typically use a jet of water to propel the craft forward, and even then, animals such as Octopi (Octopodes, Octopuses, whatever) and squids use jet propulsion to swim. The motion is because, in part, water is being displaced and nature abhors a vacuum, meaning water is going to immediately rush in and fill the gap of the displaced water, which will create push against the person.

There's an entire branch of physics that is devoted to the study of how fluids (liquids and gasses) interact and move called Fluid Dynamics.

Though one thing you aren't considering is that unless your magician is not of terrestrial animal nature, she is about 70% liquid water by body weight. Why not just throw her water weight around and let it pull her non-water weight (the carbon, the calcium, the nitrogen, and oxygen) along for the ride?

So a big issue with swimming in water that is not present in air is friction and drag. Because water is a liquid, rather than a gas (not to mention much, much denser), the molecules still have intermittent bonds to one another and this makes it a lot harder to force one's way through. This is made worse by the fact that because of how fluid dynamics work, flow is often at its slowest nearest to the object in question (laminar flow). This makes swimming fast very energetically costly, and indeed, at very high speeds this can cause serious damage due to cavitation bubbles. Living high-speed swimmers such as dolphins, marlin, makos, and tuna sometimes show tissue damage from cavitation bubbles, and it's though that the maximum speed seen in living ocean animals today is about as fast as a biological organism can get in the water...which is notably much slower than the speeds that the fastest land animals or birds can reach. The fastest reliably recorded marine animal is only about 75 kph.

In fact, submarines and boats, which are made of much tougher materials like steel and titanium, often show damage from caviation when made to go very fast.

However, one way around this is to create a bubble of air surrounding the object, which means the object is technically travelling in air rather than water, and hence can travel much faster without significant drag or friction and avoids caviatation damage. The denticles of mako sharks do this to reduce drag and increase speed, and similar ideas have been proposed to increase the speed of torpedos.

So, for your character that can telekinetically control water to some degree, they can compel the water to allow a small bubble of air around their body to reduce friction and create a supercavitation bubble. This is not too dissimilar from proposals for an Alcubierre Drive for faster-than-light travel, but in water instead of in space. Indeed, this has precedent in the sharkskin-inspired suits that Speedo made, which increased swimming speed by such a huge margin they got themselves banned from the Olympics. This would allow them to swim much, much faster than an ordinary human.

Another option is to attract water to surface of the body, with different force/pressure creating buoyancy force in direction of let's say legs to head, and pushing in oposite directions water in front, to reduce drag.

In frame reference of ones body it means one(the same) configuration of forces/mental excercise is applied, and you steer more or less like usual diver/superman style.

Buoyancy force will not nessarly be that drastic, but pushing water sidevise in front of allow to have pretty much no resistance, so acceleration will be not fast(idk 1 m/ss ?) but top speed can be okayish, depends on lmitation of force, apllied to remove water in front.

If there is watershield around body, basically hold some surface layer more or less stationary around the body, then pressure gradient, force applied to the surface of the layer can be higher and it means top speed maneuvarability and acceleration will be higher.

Imagine that she is wearing a sort of backpack full of water, and the water is pushed out of the backpack, the reaction will be transferred to her body.

Before she starts pushing out the water she is at rest, so her momentum is 0. Once the water is moving out and away from her body, to conserve momentum she will need to be moving in the opposite direction.

Not the answer you're looking for? Browse other questions tagged physics water .

2
Applications of Limited Kinetic Energy Manipulation [Superpower]
8
What required secondary powers does my speedster need in order to be able to accelerate at 2,250 ft/s^2 without harmful effects?
9
How much water is needed to create a Katana capable of cutting flesh, bones and wood?
1
Does a character being allergic to water (specifically the $H_2O$ molecule) make rational sense?
9
Figuring out the math for the Sphere of Meteoric Conversion
6
How could a magical enchantment minimize the effect a super dense and super heavy object would have on a floor beneath it?
7
Applying this kind of physical magic to walk on air