What is a plausible way to maximize the amount of NATIVE silver deposits in a given area?

I have a region on a 'Eurasia' style continent that is surrounded by large mountains. The reason that I came up with was a very dense and volcanically active microplate that was being compressed on three sides. As such, three large mountain ranges, and a abutment into the nearby inland sea.

I want this region to be home to an absolutely insane amount of silver. Not argentite, acanthite, or copper-ore byproducts, but massive quantities of pure silver running like rivers through stone. Instead of one lonely mountain, an area of mountains that collectively stretch across a 8,000-ish km arc.

If it is pertinent, prograde orbit, earth-esque biome layout, the region in question is an east-facing cup of mountains bordering a large inland sea, with the lowest latitude being 45, and the uppermost reaches into the low 60's. The civilization era is High Medieval, but with massively improved healthcare and sanitation.

Here is a political / geographic region map I created using the Inkarnate software. 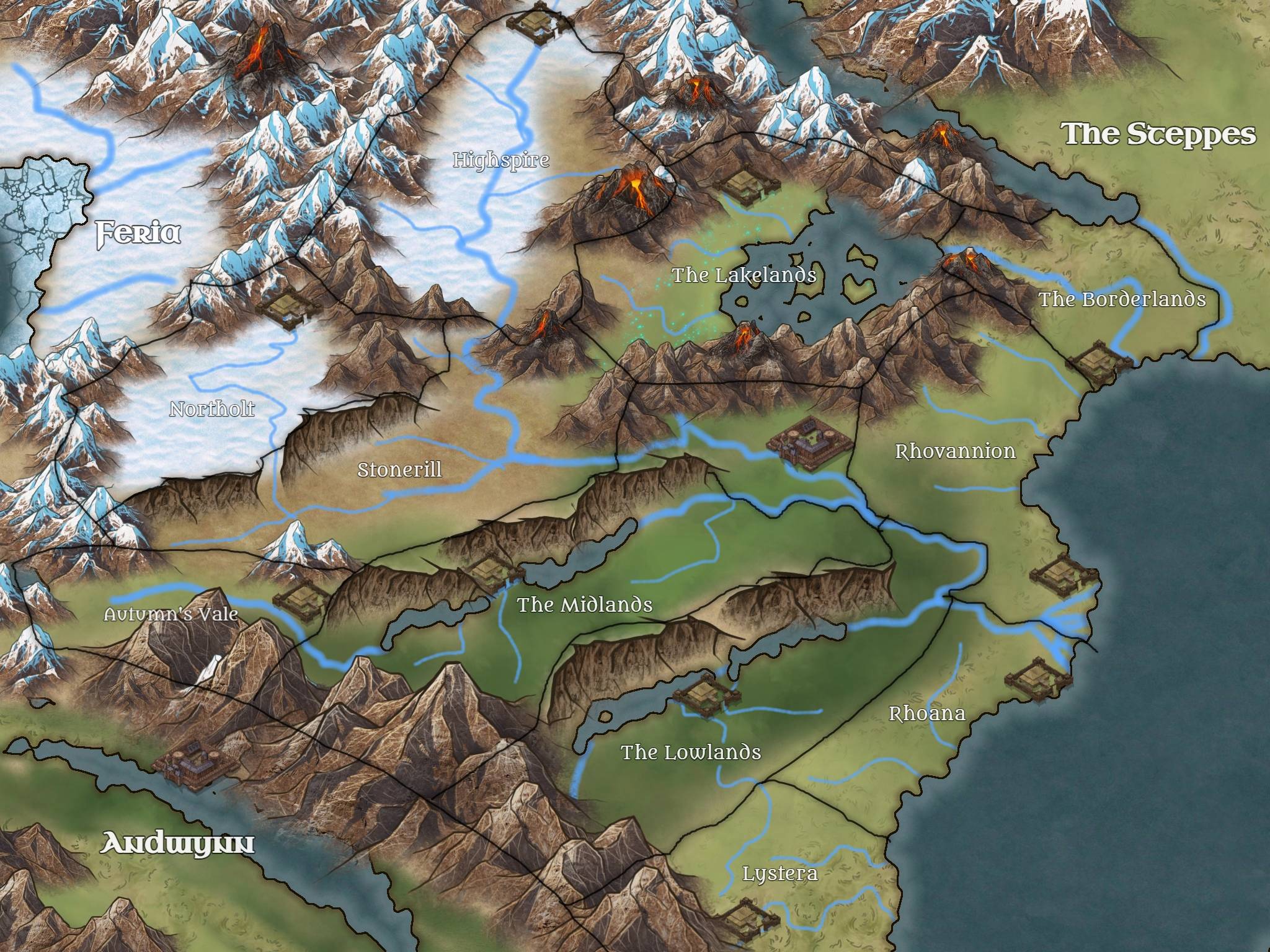 The 'Lakelands' are a massive volcanic caldera surrounding a mega-hotspot which erupted some couple of thousand thousand thousand thousand years ago. If my geology is correct (which it likely isn't) Silver is usually upwelled from divergent ocean crust, and upthrust at convergent boundaries, or hydrothermally refined from cooling magma chamber precipitates. I wanted a mix of the two to cover my bases.

The weird step-like tiers of the Northolt, Stonerill, Midlands, and lowlands were a vain attempt to use "folding" (like in the great basin of the US), and copious amounts of erosion via river to make some nice landforms. The real mountains, as in formed by tectonic processes, are the Andwynns in the south, the Spires in the North, and the Lakeland rim.

The big question for actually qualified people to surmise.

Where, and to what degree, would the native silver deposits be, and how would one reasonably maximize this as a worldbuilder?

I wanted to avoid involving the practicality of a state or civilization hoarding a metal, thus making it common, to keep the question straightforward. I will link another question about the viability of a artificially constrained market. Once I can get a general feel of exactly how much silver I'm dealing with.

Native silver never occurs in isolation in vast quantities. It is always associated with sulfides of silver, such as argentite, acanthite and others. It is also associated with nickel and cobalt arsenides. It is rarely found as a native element.

This has been observed in a number of geological provinces:

Many silver deposits are of hypogene origin - they form at great depth where temperatures and pressures are high and water can remain a liquid above temperatures of 100° C. Minerals crystalize from hot aqueous liquids in such environments when temperature and pressure drops.

Most native silver is found associated with hydrothermal activity. In these areas it often occurs in abundance as vein and cavity fillings. A few of these deposits are large enough and rich enough in native silver to support mining.

If such a place did exist it would be a spectacular world class deposit of silver.

For a tongue-in-cheek solution, relying on magic and accident: "someone tossed the Philosopher's Stone into a volcano and it's still reacting with the mantle".

That "prima materia" sought by alchemists was held to have some very desirable properties. One that isn't so famous is that it could be "compounded" - once you had some, you could use it to make more indefinitely. The rules of alchemy are yours to dictate, and you can justify anything you require - Earth has formed natural nuclear reactors before. You can state that under volcanic conditions, alchemy can turn molten rock into silver.

So, suppose that: Someone dropped some into a volcano and a fragment found its way into the mantle. The prima materia started "compounding" underground, spreading through the mantle. (Presumably under geological pressures and temperatures, exotic reactions are possible that weren't predicted in an alchemist's lab.) Your upper mantle is doped with alchemical catalyst, and now any volcano will spew incandescent rivers of silver.

Of course, the common materials are a baseline for any world. What about the rarer metals, like legendarily-strong and hard-to-smelt iron? If the same alchemy is busily converting it to gold, then iron will be rare and prized, while gold and silver will be toys.

Don't forget to make the prima materia low-density, or it might be Midas to your planet's iron core and destroy the magnetosphere. But perhaps the gods thought of that.

Europe used to be below sea level

I'm no expert. I did go through a plethora of articles of silver forming and how it is found as you peaked my interest. The added difficulty is the native deposit requirement.

Silver is created in relatively cool stars. One article explained that during the formation of the solar system, the inner solar system where the Earth resides was too hot, leaving the Earth "depleted from volatile elements" like silver. However, later in the formation of the Earth silver is found in higher quantities. As the inner solar system cooled off, astroids and the like can deposit silver. This is why in a lot of silver on Earth has traces of extraterrestrial origin, according to the article.

Silver seems rare but widespread. The widespread nature isn't a direct problem for the story, as the metal is often in such trace amounts and bound to other elements that it's not minable. Native deposits are very uncommon, so most silver is found combined with some other materials. Silver can be concentrated however. A few articles condensed into a few sentences: native silver from the crust can be "created" most easily via submerged volcanoes. Water filters down into the rock, dissolves many material and can take the now free silver with it. It goes into or close to the magma chamber and thanks to gravity and crystallisation it can be separated, creating concentrated deposits of, among other chemicals and metals, native silver. This is than expelled through the vulcano, leaving it on the ocean floor.

From what I read, the best would be a combination of the two. The advantage is timescale. Geological processes take millions of years, so it can all happen a long time before the continent is formed.

After the creation of the Earth, it is assumed it didn't have a moon yet. At a certain point a huge celestial body crashed into the Earth, possibly giving it the tilt that gives us the seasons, while the celestial body got trapped in the gravity well and became our moon.

The impact could shatter a tectonic plate in multiple pieces, ablate enough that it'll become lower than the water and deposit a lot of silver from the asteroid. (This could have as an addition that your moon shines brighter or is a bit like a mirror, because of a higher silver content on the surface.) Because a whole lot of land is now below water and the crust/tectonic plate crushed, it can get very high vulcanic activity, spilling out lots of native silver among other things. This can mix with the silver deposited by the impact of the now moon. Due to geological activity the silver gets properly trapped in the rock, while tectonic activity pushes the land above water after a time, in addition to creating a lot of mountains and faults because of the increased tectonic plates/activity.

You'll likely have a lot of native silver, along with other metals and not native silver. It can explain the vulcanic activity and mountains around a certain area as well. The only thing is that silver will always crop up in other areas around the world, although probably not as abundant, especially in native deposits. But again, this is an answer created by just looking through a boatload of articles. None are terribly specific in quantities of formation for example.

you already have the right conditions, the rest is luck and since you are writing the story you make the luck.

the largest silver deposit on earth is a dacite volcanic dome in Bolivia called Cerro de Potosí, it produces large amounts of native silver and very easy to smelt silver chloride. it has been producing for hundreds of years. It formed from deep magma rising to the surface.

As a side note it also produces a great deal of tin.

Start with a rocky world that contains the usual mix of elements expected to form a planet.

This planet is discovered by beings that do large-scale mining of asteroids and planets. The miners do refining in place to improve the purity of the cargo since customers don't care for the associated heavy industry associated with refining and they willingly pay the premium for the refined metals.

The miners are in the process of harvesting the enriched silver layer and have started moving the cargo transports when they are suddenly destroyed by a nasty space virus, malicious AI, or something else. Sadly, the miners are wiped out to the last person.

The mega-transports containing millions of tons of silver are now on an unintended trajectory that collides with your planet sometime in your distant past.

Not the answer you're looking for? Browse other questions tagged geography metals mining mountains tectonics .

8
How large can a mountain range get?
7
How concentrated would a metal ore need to be to be extractable by a suitable plant?
15
Which Natural Resources Go Where? (Medieval Fantasy Setting)
7
How would a large arctic mountain range affect the weather?
4
How could a mountain range naturally form in a roughly clean, complete shape?
0
Would this region have a desert?
8
Coastal Mountain Ranges--In Which the Mountains are the Coast
7
How common is it for a river to enter a valley from a flatter plain?
2
Is This Realistic Physical Geography for my World?
14
Reasons for a very small but very high mountain range in an area with no plate boundaries?