How can my large cephalopod aliens have an upright stance?

I have a species in my sci-fi setting, that are basically land-dwelling sapient nautilus.

They differ from most concepts of "land-dwelling cephalopod" in that they're supposed to be the tallest creatures in the setting, towering over everybody else, up to three meters in height: 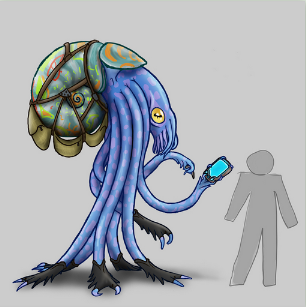 What anatomical quirks can allow them to have posture like in the provided picture, without taking away the dexterity and bendability of their tentacles?

I was thinking about some cartilage-like cores in the tentacles that are resistant to compressive forces but can bend to relatively tight circles, so the muscles of the tentacles mainly work to prevent the cores from bending the wrong way. Probably even with a gradual increase of bendability, so that they're stiffer near the beginning than near the "hands". Could that work?

Shear tentacle strength is all that is needed for a cephalopod to go vertical and once the evolutionary advantage of a higher point of view expressed itself, those individuals with stronger tentacles would have a survival advantage over others. If a mutation introduced cartilage structures onto which the tentacle muscles could exert force, all the better. Given enough time and survival pressure, a creature such as you describe could easily evolve.

The only objection I have is to the shell shown in your illustration. There is no reason for it to be located so high in the air, consuming a maximum amount of effort to hold it there while adding nothing to the survivability of the beast. I would hang the defensive shell under the center body mass, between the tentacle legs, leaving the sensory organs and maybe a beak at the top. Articulate the body so that it can still roll up into the shell when needed, but practically drag it on the ground and/or sit on top of it in less threatening times.

Does it need to stand, or can it simply float, like the alien creature named Huragok in the Halo series?

This is a Huragok, a floating octopus-squid-like alien, that is the most intelligent species in the known Halo universe. Their size alone is enough to tower any human, apart from the fact that they can float quite high. They are also strong enough to lift weights heavier than them. For more details please refer this page. 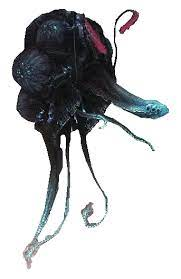 You want to look into soft robots and, to a lesser extent, compliant mechanisms. Soft robots use a bendable membrane and fluid pressure to achieve the same results as robots made of metals and hard plastics. Compliant mechanisms are a little different, relying on the deformation of materials traditionally thought of as rigid, such as titanium.

Not only are these methods feasible, they are directly inspired by biology.

From one education video:

"Is this a little like an octopus? Is that how you can think of it?"
"There is some connection there."

A more scholarly source describe how prosthetic limbs are a possible use of soft robots, and the M1 Mobile Manipulator is a compliant robot designed to replicate a human torso, head, and arms.

Not the answer you're looking for? Browse other questions tagged science-based biology science-fiction xenobiology anatomy or ask your own question.

41
How large can a water bear become before it loses its abilities?
7
Can I have a big flying creature with jaw and teeth?
3
How large and heavy would an arcology have to be?
5
Can a large animal get nutrition from minerals?
9
How would a cephalopod-like race breathe outside of water?
6
How large can a flying insect get and still be able to walk upside down?
1
How can a large creature be deceptively fast?
4
Realistic spinal structure for large headed aliens?
3
How large can an animal's eye realistically get?
5
Can a plant base have taste buds?