How do you map the climates and biomes on a tidally locked planet with no Coriolis Effect?

I've been looking through some videos and reading up on mapping out climates and biomes for fictional worlds very similar to Earth (Artifexian's videos have been a huge help), but I have been curious on how you would determine the placement of biomes on a planet with the abnormal wind and water currents present. I have been having a lot of trouble finding much information on this particular topic as all the answers I have found were on planets with the Coriolis Effect.

The planet itself is mostly water with a few large continents and many islands and a lower atmospheric pressure than Earth, as well as a higher average temperature, and a rotation/orbit of about 250 days (likely resulting in no Coriolis Effect).

Assuming the planet is largely ocean with large continents like Earth, how do you map out/determine the placement of climates and biomes on a tidally locked planet with no Coriolis Effect such as this? Like longitude/latitude placements of biomes and the effects of the odd wind and current patterns on where biomes are.

In my understanding (which is limited) the prevailing winds on such a world will blow powerfully from the substellar zone (the area of the planet with the most direct sunlight, most likely uninhabitable to all life) since the atmosphere there is perpetually expanding, forcing air outward into the lower pressure areas around it, and ultimately into the frozen night-side of the planet, where the atmosphere is perpetually condensing, though you probably already knew that.

You said you wanted no Coriolis effect, but if a planet spins at all, which this one does, then it is hard to imagine it having zero Coriolis effect. But let's say that this planet is at the right distance from its star to have a year/day length long enough that it spins at a rate that creates negligible Coriolis. However, if there are negligible Coriolis winds, how is cooling air transported back from the night side onto the day side? It seems like once it reached the farthest extreme of the night side, if there is no force to redirect it, the air will just freeze and fall as snow, quickly eliminating the planet's atmosphere, which would be a bummer. There needs to be some mechanism of replenishment, for getting that air-snow back into the daylight.

On the opposite extreme, the planet is subject to constant heating with no respite. If the planet's surface is mostly water, as you say, you had better hope that there is a large continent dominating the substellar zone, or else the oceans there would probably just evaporate, leaving space for the rest of the oceans to drain into, where they too evaporate, leaving a dry husk of a world. This central continent would surely be a hellish desert. It is half-reasonable to assume that a large continent would exist in this location, since continents have more mass than oceanic crust, and therefore, especially if the continent is a Pangea or has some rather extreme mountain ranges, it can act as an orbital stabilizer of sorts, pulling that part of the planet into that position, aided, of course, by a greater distribution of mass in the planet's mantle as well, which is presumably what helped to form that continent.

If the planet's inhabitants are lucky, the central continent will be surrounded by large oceans, with other continents enjoying the near-constant ocean breeze blowing in from the substellar zone, creating Mediterranean climates on the coasts of these continents closest to the substellar zone, which we will call the Inner Coasts. Here in California, we experience just this, as the land is situated on the western edge of its continent, where the prevailing winds carry moisture in off the vast Pacific Ocean.

Depending on how far the edge of the substellar zone is from the edge of the night-zone, you might have a lot of area to work with for the habitable band, or very little, effected by things like the planet's axial tilt, its distance from its star and the star's luminosity, all things which I have a very novice understanding of. I do know that if the axial tilt is extreme enough, the northern and southern extremes of the habitable band will experience a form of day-night cycle in place of seasons.

Remember that this planet does not have an equator per se, at least with regard to climate zones, but instead has a central point, the substellar point, where the star sits at the zenith, and likewise the planet's substellar zone is analogous the Earth's tropics. Where on Earth climate is largely determined by distance from the equator, climate on our tidally locked planet will be determined by distance from the substellar zone, forming an arrangement that is concentric, like a target or eyeball, rather than lateral like Earth's latitudes. Bear this in mind, and place your climate regions accordingly.

Meanwhile, we have mountain ranges and other landforms that can create rain shadows or fertile valleys. Looking at California again, we have barren deserts almost right next to and at the same latitudes as wooded mountains. You can use topography to create climate regions, if you know your stuff.

In fact, much of the ecosystem and climate on this planet would probably be contingent upon local topography. The aspect of a slope could very well determine what types of organisms can survive there. It certainly effects plant distribution on Earth, with more heat tolerant plants growing on the south slopes of a mountain in the northern hemisphere, and more lush growth on the shadier northern slopes. On a tidally locked planet, a slope with a sun-facing aspect will have very different conditions than one with an ani-sun-facing aspect, and an aspect with a similar angle to the ground at the substellar zone would probably be uninhabitable to all but the hardiest lifeforms. I expect that life would flourish best in mountainous regions where there is plenty of shade. Remember that the shadows on this planet are more or less permanent.

Long story short, look at Earth, and adapt things like prevailing wind direction, topography, and angular distance from the equator/substellar point, into a suitable orientation and position on your tidally locked planet. That's what I do when building this fascinating type of world.

I hope this was helpful.

You haven't specified the type of star, but to get a tidally locked planet within the habitable zone it will have to be an M (red dwarf) or K (orange dwarf), at a distance of ≤0.6 AU:

This also means the planet's period will be somewhere between 12 and 219 days, a little short of the desired 250, according to some quick calculations (try it here, keeping in mind you need to use values to the left of the Tidal lock radius that fall within the yellow Habitable zone). This means your Coriolis effect will be stronger than anticipated, but that's a good thing because you want the atmosphere to circulate.

Rather than a concentric ring of superheated air, newer models predict the Coriolis force will 'stretch' the substellar atmosphere longitudinally, as in this example: 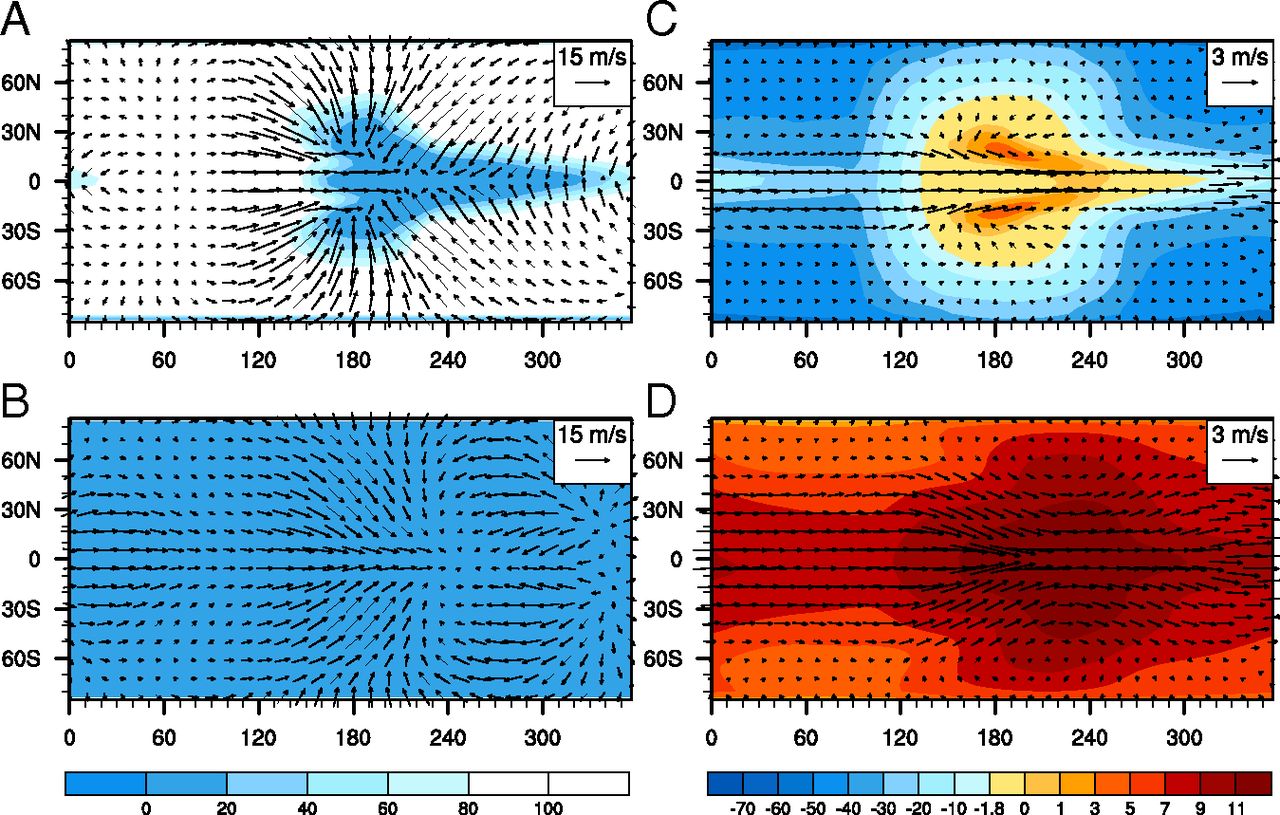 The left column (A & B) shows direction and speed of surface winds, the right (C & D) ocean currents. Keep in mind this is a model of different ocean planets, with white as sea ice and blue as open ocean, but the pattern holds across multiple simulations: each hemisphere its own atmospheric cell, with temperature, pressure, and so forth, stretching and mirrored along the equator: 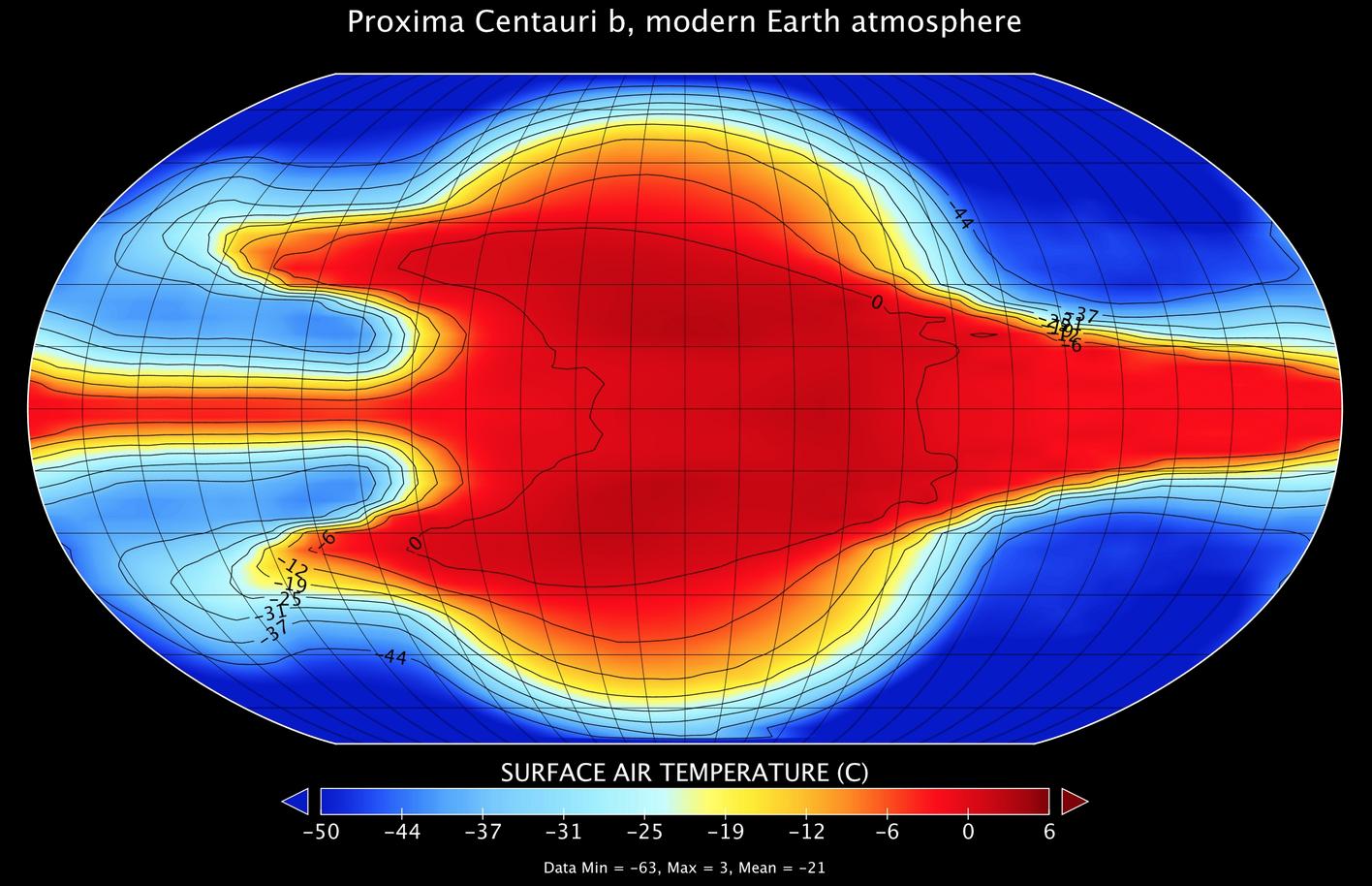 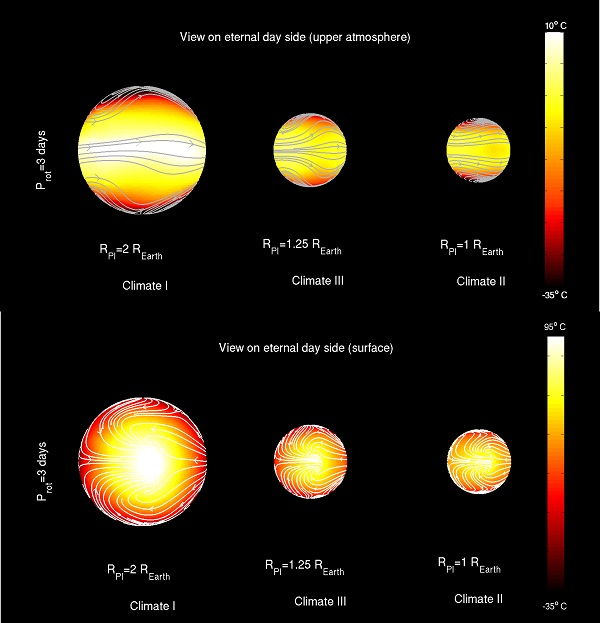 You'll notice the orbital period and other details vary from one simulation to the next, with a general trend of less 'stretch' the longer the period is, with all periods so far being in the low to mid double digits.

To me this suggests climates would be mirrored along the equator for most of the substellar face, with the coldest climates forming arcs across the antistellar face above and below the warmer (but barren) nightside equator.

If you're wed to the 200+ day period and its ultra-low Coriolis, here's what seems to happen when the period approaches 100 days (far right): 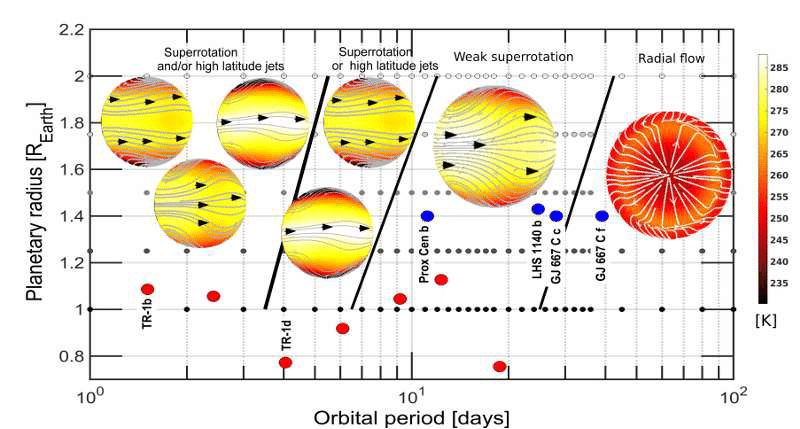 Radial flow, or a single cell filling most of the substellar face of the planet, with what appears to be an atmospheric ridge just this side of the terminator. (Keep in mind this diagram shows the upper atmosphere, so surface winds would be the opposite direction).

From this I would assume a tropical climate at the substellar point, drying to savannah and then hot deserts as it approaches the Terminator, a ring of temperate trees grabbing the last of the useable sunlight at that ridge, then a rapid transition to colder grasslands and shrub-covered sun-facing hillsides before the dark wastes beyond.

The longer the period gets, the smaller the tropical zone and larger the hot desert would get.

Without knowing where your continents would be and how they'd shape ocean currents, and how those currents would interact with the prevailing winds, I don't think it's possible to get more specific than this.

Not the answer you're looking for? Browse other questions tagged planets environment climate geography map-making .

29
Keeping an "hot eyeball planet" wet
50
How would winds behave on a tidally locked planet?