The Marine Invasion Had Come in Full Force, But How Would They Adapt to the Challenges of Terrestrial Living?

Related to my previous question.

252 million years ago, in an alternate timeline, a gamma ray burst wiped out 96% of all terrestrial species and only 70% of all marine species. The ozone layer, the atmospheric shield against solar radiation, had been cut down to only one percent of its original thickness.

Fast-forward to one thousand years. Not only has the ozone layer been restored, the new atmosphere is thicker--480 miles as opposed to the previous 300. What's more, the vastly vacant land was being invaded by all sorts of marine organisms--trilobites, barnacles, ostracods (seed shrimps), trilobites, corals, sponges, cephalopods (squid and octopus) and even echinoderms (sea stars, crinoids and blastoids).

But the invasion of the land has its own challenges, so how would the listed organisms adapt to make their new homes?

This feels like you are asking us to create your world for you. Be prepared as one comment says, to cut it into pieces.

That said, some brief thoughts.....

The thickness of the atmosphere relates to gravity and gas density. It just doesn't arbitrarily somehow get 60% thicker or further out. As the earths mass doesn't change on geological scales (short of collision which destroys everything anyway), this implies a much denser atmosphere - completely different gasses/vapours. I doubt its possible. Worthwhile asking - Could the earths atmosphere become 60% deeper while not destroying all life? What could cause this?"

250 million years is a long, long, time in evolution. It's enough to cover both mammalian and reptile dominance of land. Your sea life could evolve to conquer land very easily in that time - after all, amphibians, gastropods, invertebrates and many others did. Look at what they did, to see what happened.

Overall, its far too open. You're asking how each of a very wide range of disparate species and families evolve over geological time to handle land. Do some research on what's actually happened, then ask more specific questions. 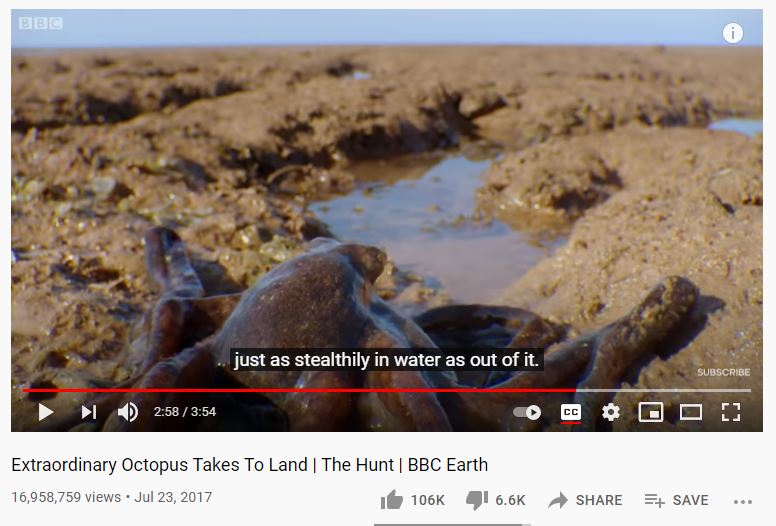 Water creatures can go on land now. Eels and catfish notoriously migrate overland. Other creatures can as well, like this octopus. Generally they like it dark and wet when they do, because they easily dry out when in the air.

If the world changed such that things did not dry so easily, ocean creatures could spend more time away from the water. Your world has all of these various water creatures becoming terrestrial because the increase in the amount of atmosphere increases the amount of water the atmopshere can hold. In many places in this world, wet things never dry out.

Your question can be seen as a little broad, since it asks about how several different groups of animals would adapt to life on land, which can lead to a book worth of details on the potential ways they could adapt. With that said though, let's go over some basic adaptations and talk some details about certain groups and why they probably would or wouldn't be among those adventuring in this new, but much drier environment:

Echinoderms: I'm fairly certain they wouldn't. Their ambulacral system, which is used both for breathing and locomotion, is dependant on a rather constant flow of water to function properly. All echinoderms are extremely adapted for life underwater. Couple that with them being fairly fragile, having fairly inefficient gills when compared to other animals, the fact that they can be easily stressed and how slow they normally move and you can see why they'd have few reasons to go to land to begin with other than getting stranded. The fact no freshwater echinoderms exist and that they engage in external fertilization is, as far as I'd see, one of the final nails in the coffin on why they probably wouldn't leave the sea to go to land.

Sponges, seed shrimps, barnacles and corals: they're all filter feeders, and filter feeding doesn't really work that well outside of water, making their extensive adaptations for such a lifestyle pointless. While there is the argument that these animals, as well as the echinoderms, could still change and adapt to fill other niches on land with the right pressures (which I won't get into, because to speculate on that would probably result in enough text to write a small book about speculative evolution), this is another group I don't think would be a (major) part of the group of great land explorers (especially not sponges, they have no real systems or organs and essentially no way to move around, I very much doubt they'd leave the water).

Trilobites: pretty believable. Their adaptations for life on the sea floor, the ability to burrow into sediment, their diet being probably based mostly on detritus and the fact some species could roll up makes it very believable that they could start living on land, probably adopting a lifestyle very similar to that of modern pillbugs, which can also survive on land despite having gills due to sticking to humid areas. This one easily makes the list and is actually pretty believable (especially compared to sponges).

Cephalopods: I have little doubt they would easily fit the bill, especially octopuses since this group of cephalopods already has several members with the ability to stay out of the water for short periods of time, with the land octopus being the one known to go around leaving tidal pool after tidal pool in beaches the most in its hunt for crabs. In fact, I'm not the only one, with speculative biologists having already thought about how cephalopods could adapt, becoming what they'd call the Terasquids. Quoting from the source:

To successfully colonize the land, cephalopods had to improve their land-living adaptations. Their tentacles became stronger, the muscle fibers forming a crisscrossing network that could contract to produce a solid support or extend into flexible appendages. Over time, most of the tentacles developed beneath the body as powerful columnar legs. Since these legs could support more weight, larger animals could evolve. Meanwhile, the cavity below the domed mantle developed into a type of lung. At last, many cephalopods (excepting such species as the rainbow squid) had discovered an efficient means of breathing air.

I'd also think adaptations such as a tougher or at least more well protected skin and/or a better immune system would be selected, since as is the skin of cephalopods is fairly frail and prone to lesioning, which is particularly bad if you're walking around in drier environments filled with a fair amount of rough and hard surfaces, leaving them more vulnerable to pathogens. Changes in the eyes, circulatory system and fertilization method. Still, I would probably still expect land octopuses to stick closer to humid, rainforest-like environments if those were available, since they provide the perfect habitat, in my opinion, to a group of soft bodied animals with special skin, many limbs to navigate the environment and a good level of intelligence. I definitely Don't see any cephalopod adapting to life in the desert.

Lastly, one thing that will greatly influence what does and doesn't adapt to life on land is competition. You said that 4% of land dwelling life was still around after the disaster, probably being consisted mostly of smaller ground dwelling burrowing animals and arthropods highly resistant to radiation, and while the other creatures are adapting to be able to live on land to begin with, these ones already have most of the adaptations needed for that, and they too are in a situation where several niches are vacant. You can definitely expect competition between these newcomers and the pre-existing land species rapidly branching into new ones in the evolutionary arms race to prevail at filling in the vacant niches.

Not the answer you're looking for? Browse other questions tagged science-based creature-design evolution alternate-history adaptability .

6
Who on Land Will Survive The Inverse Great Dying?
3
Explaining Leafmaw

4
How would the design of tools differ if people had developed crassly dissimilar hands?
1
Adapting organs, How would they adapt?
6
How would endo-skeletal systems adapt to the atmospheric pressures given?
1
How would aquatic life adapt to the oceans becoming highly corrosive?
6
Who on Land Will Survive The Inverse Great Dying?
4
How Would Freshwater Reefbuilders Differ from Saltwater Reefbuilders?
3
How would life develop/adapt in an Earth-like planet but with less sunlight?