Anyone know some Artificial muscles?

For this question, I want to have robots/androids with artificial muscles for motion. I know that there is a kind of silicon-ethanol muscle that works by thermal energy (the electricity boils the Ethanol, making the liquid to become gas, expand and simulate a contraction).

But nothing really useful for robots in general, nor close to Westworld silica-muscles

The only thing I can think of is dielectric muscles, but these need charges beyond 10kv to work.

Are there designs currently or in development that would be suitable as artificial muscles for a robot or android? The goal would be to achieve something similar to artificial muscles as shown in shows such as Westworld (but not looking for an explanation of Westworld; it's just an example), functioning as muscles not hydraulics, etc.

I can imagine that the answer is a hard one, but I want to know if there is something out there that gets close enough.

There is a group at UC Boulder working on Artificial muscles (https://doi.org/10.1002/adma.202003375) that are made out of small, aligned plastic pouches which contain an electrostatic fluid which expands and contracts upon creating a potential difference across all pouches.

By designing pouches in various shapes and by changing the fluid volume, various contractions can be developed to increase the degrees of freedom i.e. more types of movements.

You need to look up Festo. They're the company behind those viral youtube videos of flying penguins and birds.

Most of their products are normal servos and actuators - electrical, pneumatic and hydraulic. Their experimental stuff are meme worthy (just search for "festo" on youtube) . However, they do sell this pneumatic muscle: https://www.festo.com/us/en/p/fluidic-muscle-id_DMSP/?q=~:festoSortOrderScored 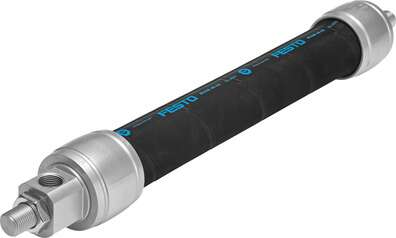 You can see a simple demo of this on youtube: https://www.youtube.com/watch?v=2iG1ybuchx0

Their commercial muscle is quite large. However they have made experimental muscles that are tiny. Of course, you would need a full pneumatic or hydraulic infrastructure to expand and contract these muscles but you can hide the pumps, valves etc. in the robot's body as organs. In fact if you searched youtube like I mentioned above you would find example robots from Festo themselves that they use as demos at trade shows.

Not the answer you're looking for? Browse other questions tagged science-based chemistry robots artificial-muscles or ask your own question.

5
How can my robots have human-like muscles?
59
Why would anyone build robots when they have human rights?
6
Dragon flight muscles
3
Mechanics and structure for an artificial giant creature?