How does a group of terrorists that can turn lead into uranium cause the most damage in an industrial revolution society?

I have a group of time wizards (who only use time magic) who are attacking a country that just underwent a massive magical industrial revolution. These wizards are terrorists and they have a spell that can rewind 100 kg of lead into a piece of uranium with equivalent mass. The spell can reach 30 feet and has obvious incantations and arm movements, but magic is common so most people won't give it a second thought. How do they use this spell to cause as much panic as possible in this society?

magic time-manipulation industrial-age
Share
Improve this question
asked May 21 at 12:40

Any element has unstable isotopes which are radioactive. That might be what you want to consider in addition to or instead of changing the element. 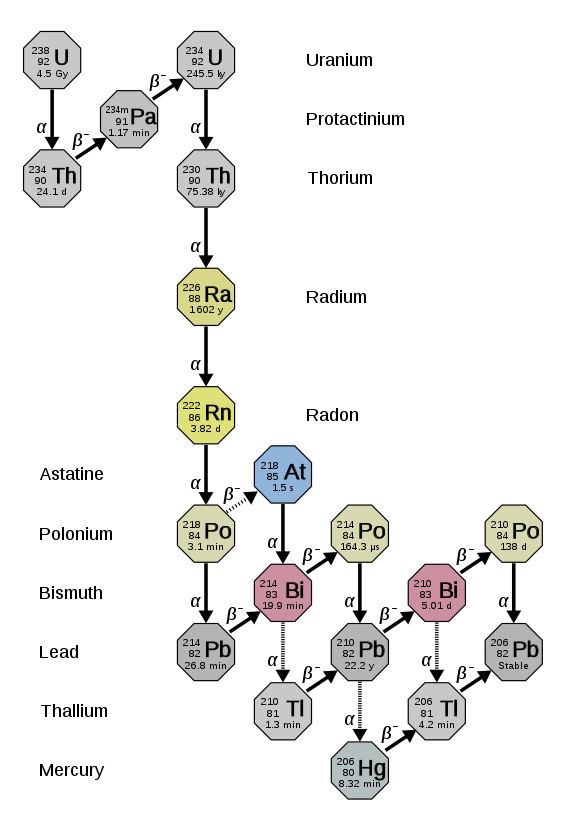 So for your story you might consider turning lead into Radium or Radon gas which would be much more deadly.

Terrorist weapons (we might consider chemical and biological weapons to be such) are concerned with delivery. So Radon gas might be a means of delivery.

I am assuming that your time magic works be reversing the flow of time around a piece of lead so that it reverts to its previous form, uranium. This means you will end up with natural uranium (i.e. the distribution of isotopes is the same as that as found in the Earth crust). By far the most interesting thing I have learned researching questions for this site is this:

Health effects of natural and depleted uranium are due to chemical effects and not to radiation.

I was all ready to write about alpha particles and replicating the effects of fallout, but apparently all of that is off the table. The dangers of natural uranium are almost entirely chemical, which means that the molecular form and method of uptake are the most important factors (this source used for everything below). Since there is no way for the terrorists to aerosolize their uranium (at least none that I can think of), they are forced to rely on people ingesting the uranium.

By far the most damaging compounds of uranium when ingested are soluble. Fortunately (or not depending on your point of view), uranium ore, specifically carnotite, is soluble, so even if your terrorist-wizards don't know much about chemistry they have access to toxic uranium compounds. Fortunately (or not depending on your point of view), there have been no human deaths attributed to oral exposure to uranium, and concentrations that could kill rats were so high they refused to eat the food until a sweetener was added. Even if you did get someone to ingest uranium despite the clearly horrible flavor, the effects would not be significant:

A volunteer given a single dose of 1 g uranyl nitrate (14.3 mg/kg) and observed for clinical signs and symptoms within 24 hours after intake suffered acute nausea, vomiting, and diarrhea within a few hours of administration. All clinical signs returned to normal within 24 hours after administration of the oral uranyl nitrate dose (Butterworth 1955).

Uranium compounds can also cause a lot of kidney damage, and in a place without access to modern medicine this could be fatal, but I don't think it would be useful to terrorists. For uranium concentrations to be high enough that kidney damage can cause death in your context, there is no way to cause uranium poisoning except through force feeding, which is way harder to do than simply stabbing the target.

First, as has been pointed out, not all the lead came from uranium in the first place.

Second, where did the uranium come from? Wind it back far enough and you have hydrogen. Makes a big boom if you let it mix appropriately with the atmosphere and then light it.

Or lets not go quite as far back. The s-process (slow neutron capture) hits a wall at Polonium (you have to go from Po-210 to Po-215 before you have any chance of going higher and the half lives of everything above Po-210 are measured in microseconds at best.) Thus your uranium must have come from r-process (rapid neutron capture) in neutron stars. Anything that can bridge that wall at Polonium is fast indeed--and it's not going to stop at uranium. You're going to have a hellish brew of later row 7 elements if you wind every atom back to it's highest state. (And how are you picking just how far back to wind it??)

While you're not going to get an atomic boom out of it some of that stuff is very hot indeed--lethal radiation for anyone nearby.

This will be occurring in the outer layers of neutron stars--I doubt anyone knows how much mixing there is between the atoms on the surface and the neutron soup beneath but since the atoms keep changing there must be some mixing. I have a hard time picturing not having a decent number of free neutrons in the brew--not that big a deal directly but you're going to get neutron activation of whatever is around. The radioactivity of uranium is irrelevant, this is not.

Turn the lead in the church roofs into uranium.

This is assuming they've discovered that uncontrolled exposure to uranium makes people sick. You're talking about a period before the discovery of radiation and its effects.

However most societies of the time were deeply religious and lead is a common roofing material. If the act of going to church makes you sick it's going to cause significant social trauma.

Not the answer you're looking for? Browse other questions tagged magic time-manipulation industrial-age or ask your own question.

5
How would currency exchange work between wizards and muggles?
6
How to avoid magic from affecting society's technology?
11
Running a successful Prison complex for Wizards
18
How does a modern military defend against a guerrilla Army of wizards
8
How could males be essential to a gender-specific magic system?
10
Magic for tone-deaf people in a world where magic is performed through song
22
Weaponising the Grasp-at-a-Distance spell
7
How athletic would my Mages look with this Magic System?