How athletic would my Mages look with this Magic System?

For my magic system, referenced in a few of my newer posts, I explain that magical energy is required to cast spells, but this energy is not evenly distributed.

The energy flows from areas of close relation to the magical element (Air, Darkness, Death, Earth, Fire, Ice, Life, Light, Storm, War, and Water) in question: Forests are Life, oceans are Water, etc. In addition, regions can be multiple elements: Volcanoes are both Fire and Earth (Mountains are Earth, lava is Fire), hot springs are similar but Fire/Water, and battlefields are often War/Psyche, and also Death just after the battle.

From these reservoirs (Magivoirs) come Magistreams, useless strips of magical energy, which, if they cross on another, form a Magipool, a strong source of energy often more convenient than a volcano or cavern (Graveyards are still used often for their strong Death/Psyche sources for a conveniently close place). If a Magistream moves so that a Magipool only has one supporting Magistream (Which happens all the time), it fades away. Multiple Magipools of the same element can connect if close enough, forming a larger one called a Magijunction. These can stay until only one Magistream crosses through it, no matter how big it gets. In addition, temporary blobs of magical energy can form in the area of a spell, like the actual area or a trail following someone affected (By flight, mind control, or buffing). These are called Magistrikes, and last for roughly 10 minutes (Unlike Magipools, which last indefinitely until less then two Magistreams is left supporting them).

From the day a young mage (Called apprentices even if they attend a magical school or are teaching themselves) starts learning magic and spells, they are taught how magic moves unpredictably, and how to sense new sources within 31 meters of themselves (About 100 feet away) that will form in 6 seconds (Or find existing ones within that same radius). Mages use these to charge magical energy

Obviously, 6 seconds to cover 100 feet is not impossible for humans (This is actually under our max running speed for the average Jack or Jill (120 feet/6 seconds is 13.6 mph, we can run 15 mph)(I stole that from the RPG Stack Exchange)), but it's still essentially sprinting.

In addition, once the magical energy is out of the mage's body (Where it was stored until used) for use in spellcasting, the exact energy needed is spilled all round the mage; The mage is temporarily given master gymnast and acrobat abilities to collect the energy until the spell is cast. This is as in the mage is able to perform flips and other crazy stunts effortlessly to get the energy for the spell until the spell is cast, but must use actual muscle energy to do it (But magic takes some of the brunt off of that much energy expense).

Also, healthy eating is the best diet to help absorb energy; Splurging on candy and cake and other junk food all the time, or eating all the time in too big of quantities, lessens the magic absorption rate. Eating healthily in good amounts, and the occasional chocolate or alcohol consumption, drives magical energy absorption rates (And magical capacity) through the roof.

In general, Mages must be able to sprint short distances, sometimes several times in a row, perform magic-boosted gymnast stunts and flips, and eat great.

This, obviously, means that no mage is overweight or scrawny. However, I doubt if they would look like Olympic athletes (Particularly tennis players, who have similar circumstances of athleticism), but they won't be chubby.

What would they look like, exactly, if they have to run like mad and do stunts for a living?

Someone asked me how much mental/physical training for mages, and this is what I'll say: They learn magical theory and practice simple spells (Like D&D cantrips) for 6 hours a day, and have physical training 2 hours a day when apprentices, and most continue that well after graduation. Self-taught mages, however, often wind up doing similar times, due to it making sense (Or, for more advanced people, they looked it up on the Damarian version of Wikihow).

Given the blend of Physical requirements and mental discipline, I suspect your top tier Mages are going to look like either long term Yoga Practitioners or Parkour experts.
Come to think of it, in outward appearance, they will look pretty similar. Slim, Athletic builds. Not big beefy Muscular types, more like Bruce Lee or Jackie Chan in his prime. You know, slender, flexible anatomy charts.

Here is why: Your mage needs to be able to move quickly and efficiently (parkour) and also arrive and drop into a state of focus (Yoga). Both activities require a lot of body awareness. I also would like to drop a touch of Tai Chi in there as well as some of that involves the internal manipulation of Chi energy.

That covers your top tier mages, but keep in mind, folks of all body types might end up with some amount of skill. Given that your magical resources have definite rules you may also get sedentary mages. These are going to be people who work out in advance where Magipools will develop or will do things to maintain the location of a MagiJunction (ritual Sacrifice, anyone?). Or you may get wanderers, skinny people who live a nomadic lifestyle, don't get enough to eat. Think a nomadic Yogi or Guru, who's self imposed isolation leaves them skinny and underfed looking. Either of these body types may not be able to match the top tier types, but with clever application they can still be a force to be reckoned with. Think of a Trap Door Spider. With careful positioning they do well, even if they don't get out much.

It will shake out most likely along the following lines. Your Athletic types will be able to do Magic on the fly, almost anywhere, and with few limitations. Your other mages will be interested in things like locations, stable magic sources, and artifacts that allow the storage and later disbursal of magic. Imagine your Bruce lee type getting ambushed by a skinny bald guy with a walking stick, only the walking stick has been storing energy for weeks as the skinny guy walks around. 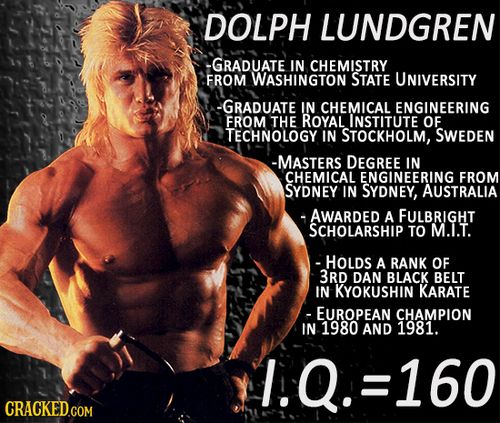 If you aren't aware, this is the boxer Sylvester Stallone faced off against in Rocky IV. While a couple of the factoids aren't correct (studied but didn't graduate from Washington State), it remains that you can be both wicked smart and full of physical ass-kickery

Although, since he's a bit exceptional, it might be a little more realistic to say: 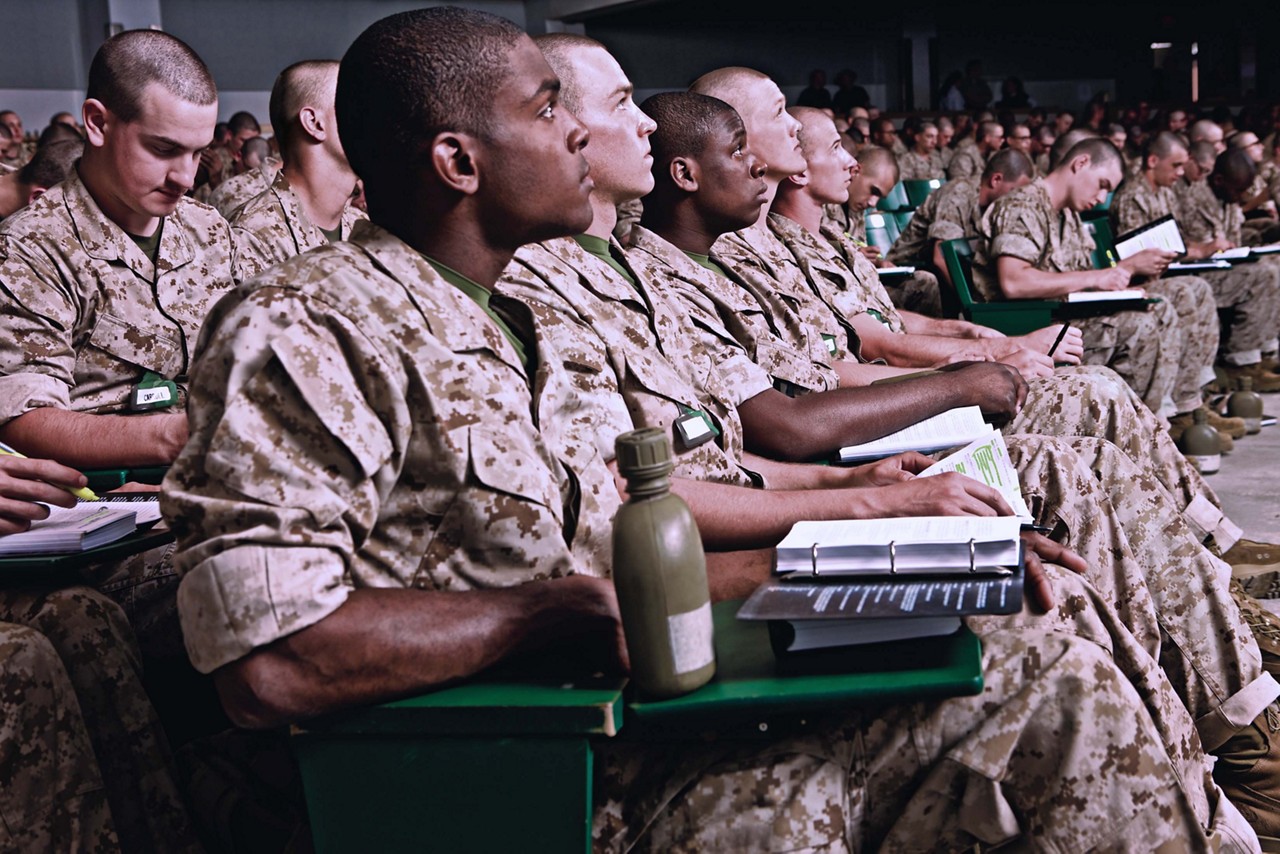 Tons of Marines earn college degrees before and during active service, and they don't even graduate from Basic without grueling physical fitness that would make lesser men like you or me quiver like a chihuahua. 100-foot sprints are warmup exercises for these dudes.

That said, "flips and other crazy stunts" belong in Marvel movies and gymnastics routines, because one can get from point A to point B faster, easier, and safer without them. They also require years of rigorous skill-based training, regardless of whether one has the physical prowess necessary to do so.

Not the answer you're looking for? Browse other questions tagged magic balancing-magic-systems .

7
How could a channeling spell be useful during battle?
8
How long would it take for consumable magic items to displace formal mages?
41
What kind of spells would magicians cast in combat if the fuel to magic is very expensive
12
In a world of normal humans, mages and humans who can't be affected by magic, how would they coexist?
18
How to realistically implement magic-users in medieval warfare?
8
How could creating a familiar permanently bind you to one specific form of magic?
7
How would naval battles “realistically” work in a world with magic