I have a species that have evolved from their world's equivalent of deep (~3 kilometres deep) sea snails, specifically from they resemble the Scaly-Foot Gastrobpod. The Xeno-ocean is salty/has a significant concentration of conductors/electrolytes dissolved in the water (similar to our ocean).

I want their present day form to be

They presently (i.e. on land) have another form of communication, a sort of radula clicking speech. But I'd like to understand how their deep sea ancestors communicated via radio wave, to form an idea how they communicate now.

I've read How to evolve biological radios?, which is helpful, but that obviously does not include the the fact that radio waves do not propagate well under water especially salty water.

That Wikipedia page (and others) doesn't go into enough detail for me to know if the sort of radio waves a species could evolve would attenuate after 10 mm or 10 meters. The lower part of that range is not useful for submarines, and the upper only for radio-controlled ones (which is seems to be the focus of articles on Wikipedia), but would be the difference between the species being able to use radio waves underwater or nor.

The reason I'm asking here, and not on Physics, is because even if there is a range of frequencies, if the antenna/transmitter required to communicate at various distances required unrealistic power levels or antenna bigger than is reasonable for a dog sized creature ( I mention that because some submarines use a very long trailing wire as an antenna, which violates the dog-sized requirement above ).

science-based xenobiology radio
Share
Improve this question
edited May 19 at 15:23
Pureferret
asked May 19 at 11:19

Submarines that support ELF communication (Extremely Low Frequency) in the sub-300 Hz range can penetrate to 100s of meters.

If you species could generate (perhaps by touching the water with a special fin/organ) this type of frequency then communication would be possible to many interesting depths.

For more background on sub communications, this Wikipedia article is not a bad place to start: https://en.wikipedia.org/wiki/Communication_with_submarines

This was going to be my idea. And here it is, but deleted! I will addend in hopes of undelete by author.

The animals are dog sized. Their antennae are much larger. 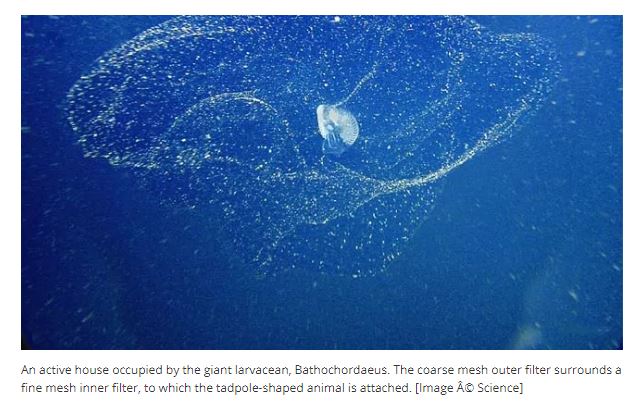 Gastropods are mucus artisans. These creatures release enormous mucus antennae when they need to use VLF globespanning radio communications. Mucus would make a fine antenna - it can be imbued with electrolytes to facilitate transmission and it is recyclable, to be eaten and used again.

According to this paper

For such air-to-water communications, an optimum frequency range (3 - 100 MHz) was identified when the plane wave propagates to depths less than 5 m. In this optimum frequency range, the wave experiences significantly smaller losses than the losses at the lowest and highest frequencies of our analysis. Specifically, this frequency range includes the bands of short-wave radio (3 - 30 MHz), VHF TV (54 - 72 MHz, 76 - 88 MHz), parts of FM (88 - 108 MHz) and US military VHF-FM (30 - 88 MHz). Therefore, various communications systems can benefit from using the optimum operation frequencies that we identified here. Also, wireless power harvesting by wireless sensors can be significantly enhanced if it is performed inside the 3 - 100 MHz range.

Apparently within 5 m the communication at certain frequencies can happen. As a 0th order estimate, the 400 fold attenuation means this signal only travels 1.25 cm.

Not the answer you're looking for? Browse other questions tagged science-based xenobiology radio or ask your own question.

33
How to evolve biological radios?

11
How would the 2016 human scientific community react if a massive space-faring alien "whale" entered the Solar System?
14
Could a microorganism possess intelligence?
4
Design for a long and short distance radio wave communicating lifeform
8
The Great Oxidation Event...Artificially Imposed on a Tharn-Like Alternate Earth
8
How would underwater weaponry and technology look under high pressure?
9
What Would a Deep-Sea Diving Humanoid Look Like
4
What technology would be necessary to allow soldiers to ascend rapidly from deep in the ocean and to the surface?