What ingredient is required to make a salve that can rapidly heal wounds in around 5 minutes?

In medieval times, instead of using potions to heal wounds, they use a healing salve that can rapidly heal open wounds of all types in, let's say, 5 minutes. (Not really severe ones or closed wounds though)

What ingredient does this salve contain?

medieval biochemistry medicine
Share
Improve this question
edited May 17 at 2:40

Answers so far try to wiggle around the issue, but with the sole tag biochemistry there is no way around it, the answer is only

Bacterias E. coli is lab culture because it grows fast compared to other, not necessarily the fastest, have no such information, but it considered to be fast and it takes it about half hour to devide in ideal conditions.

Technological approaches can solve it partially, like some nanogue placing stem cells in 3d printer way, but even then process will take longer as cells have to go that intercell connection forming and morfing etc.

You could do worse than to copy the balm made by Ambroise Pare father of surgery. Below is excerpted the famous part of his Apologie where he is treating soldiers with gunshot wounds by pouring boiling oil into their wounds. This was done of the theory that the wounds were poisoned by the gunshot. He runs out of oil and has to figure out something else.

At last I wanted oyle, and was constrained in steed thereof, to apply a disgestive of yolkes of egges, oyle of Roses, and Turpentine. In the night I could not sleepe in quiet, fearing some default in not cauterizing, that I should finde those to whom I had not used the burning oyle dead impoysoned; which made me rise very early to visit them, where beyond my expectation I found those to whom I had applyed my digestive medicine, to feele little paine, and their wounds without inflammation or tumor, having rested reasonable well in the night.

Being at Turin I found a Chirurgion, who had the fame above all others, for the curing of wounds of Gunshot, into whose favour I found meanes to insinuate my selfe, to have the receipt of his balme, as he called it wherewith he dressed wounds of that kind, and hee held me off the space of two yeeres, before I could possible draw the receipt from him. In the end by gifts and presents he gave it me, which was this, to boyle young whelpes new pupped, in oyle of Lillies, [with] earthwormes prepared with Turpentine of Venice. Then was I joyful! and my heart made glad, that I had understood his remedy, which was like to that which I had obtained by great chance.

I like that he perceives his ad hoc invention (which he calls a digestive and so probably was something originally for upset stomach) to be similar to the Turinian one made with puppies and worms. The whole Apologie is great reading.

In any case: good recipes for wound balm.

I should note that healing a wound in 5 minutes is magic or miraculaous depending on how it is done. There are not medicines that can do that then or now. I can imagine a salve might soothe pain but actual healing is constrained by biology and will take time.

'Healing' is a biological process involving a number of different cells and processes: platelets to staunch initial blood flow; production of antigens and white blood cells to counter infection; reconnection and regrowth of skin cells. Your 'herb' would have to accelerate or replicate all of these functions, and might have some serious side effects: e.g., closing a wound too rapidly might cause blood clots or serious infections as septic materials get trapped inside.

Rather than an herb, you might think about living thing — a moss, fungus, or slime mold, or similar 'stuff' say — that when exposed to blood quickly grows into an antiseptic 'artificial' skin. For all intents and purposes, the wound would look and act as though it were healed, but it would simply be sealed and knit together by the 'stuff'. The wound would continue to heal at its normal bodily rate, and the 'stuff' would die and flake off as it lost access to the blood supply and the skin regrew.

You wouldn't want to use this 'stuff' on a severe wound because such a thing would be parasitic by nature. A deep wound would mean the 'stuff' could work its way into the system so it never lost access to the blood supply, and then all sorts of bad things might happen (from anemia to toxicity to turning users into fungus-people, depending on how ridiculous you want to be with it).

While full healing is probably not possible in 5 minutes, cauterization, which essentially seals the wound to prevent blood loss, would be possible through chemical means. One chemical that was used for this procedure is call "lunar caustic", and is just silver nitrate. As silver itself was believed to have healing properties for a long time, a derivative of silver is a natural choice for testing, and solutions of silver nitrate have in fact been used for hundreds to thousands of years as a disinfective agent. In high concentration, though, it chemically burns flesh, leading to the cauterization effect.

To produce silver nitrate, all you need is silver and nitric acid. NileRed could probably come up with a precise synthesis, and I am not a chemist, but from my reading so far it looks like it could be produced like this:

Visually, this salve would have a white tinge to it from the silver nitrate, but once applied, it would form a grey tinge on all flesh that it came in contact with. This is due to the silver nitrate interacting with chloride ions in the flesh and transforming into metallic silver and saltwater. The remaining silver in the would would likely have some antiseptic effect, although I don't know how strong it would be or how long it would last for.

Light amounts of bleeding can be stopped by touching a material called a styptic. It is made of aluminum sulfate (alum), which was available in the medieval era. It constricts the local blood vessels and initiates the clotting process. They are sold today especially to stop shaving cuts, and for veterinary wounds, but can be used for other small wounds. 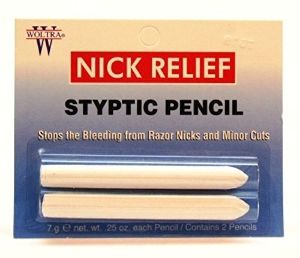 This salve would need to have some sort of magical property or ingredient for it to be that effective. Though there are some real herbs that help the body heal, none of them are anywhere near effective enough to heal that fast. My recommendation is, if you have some sort of magic in place, to try to use that to explain the salve's healing properties. If that doesn't work, try making a new plant. You could let it naturally have the healing property, or you could make it so that the plant needs special cultivation for it to be effective.

In a time period where germ theory is unknown and where healing processes are not understood, hemostasis of an open wound is pretty magical to witness.

Something that mimics surface structural proteins of target cells, forming a biocompatible continuous sheet with a proper seal.

Not the answer you're looking for? Browse other questions tagged medieval biochemistry medicine or ask your own question.

6
Create a status quo between two fantasy medieval powers
12
What would be an actual real life mechanisms of an accelerated healing factor?
5
How thick a stone castle wall needs to be to withstand a modern tank?
10
How to not let magic advance the technology too fast?
6
Could a city live in a money-free system in a medieval fantasy setting?
2
How feasible are these two drastically differnt technological pathways for different civilizations?