What would a realistic space-dwelling humanoid species under these guidelines look like? It's for a setting I am working on. They are sentient and live on asteroids, typically converted into ships.

1: Presence of a prehensile tail, to grab onto things.

2: Must be able to communicate to other asteroids naturally, and not through writing (they do not write in that sense).

3: Are capable of communicating with others of its kind on the asteroid they are on).

4: Can survive multiple hits from micrometeoroids in quick succession.

5: Can eat rocks for energy.

6: Presence of powerful claws, to grab onto rocks.

7: Can survive under gravity.

There is plenty on this stack about space beasts. Maybe I will link up some of my favorites. But first - ideas about vacuum dwellers!

Liquids under vacuum boil away. These creatures must be able to close any aperture connecting any wet areas with the outside environment. They will have impermeable waxy exoskeletons covering everything. That is not so weird - arthropods do it.

Everything needed is on board. The vacuum is resource poor. Really resource poor. We are used to taking sips of air and water from our environment but none of that in the Empty. If these creatures use biochemistry then all of the ingredients need to be housed within their bodies. Perhaps they can collect and process the rare matter that comes their way in the form of space dust and meteors.

Energy eaters If your creatures never or rarely visit planets then they will have to get their energy out in space, which means radiant energy. Visible light has some energy and plants successfully collect that and convert the energy into biochemistry. Ionizing radiation packs the most energy but so much that the conversion into biochemistry is tricky but conceivable. There is plenty on the WB stack about energy eaters.

Humanoid This is the trickiest part. Our humanoid forms are fine for using tools and wrangling our terrestrial environment. But what need is there for hands and arms if you float in the void soaking up rays? I think maybe your creatures could be facultatively humanoid - taking on humanoid form for excursions into planetary environments where that form is useful. Other planets might call for manta ray forms, or wind jellyfish forms. Your creatures are shapeshifters.

If they must live long time in the void of space, they must be able to hybernate and have some kind of symbiosis with photosynthetic organisms

It is safe to decide that a space dwelling humanoid should have no lungs and breathing system. They would be useless, plus would expose to the vacuum a lot of mucose and thin bllod vessels. Heat should not be a problem, as long as they don't touch anything: vacuum is a great insulator, they could have problems in dissipating heat.

The true problem is how to keep the metabolism working (because they can't have access to air) and how to eat.

About metabolism, these humans would be closed loops that need only light to live: their skin should be partially transparent and there should be some photosynthetics bacteria living under their skin. These bacteria recover CO2 and waste from the blood of the man and thank to light can generate nutrients and Oxygen that are released in the blood stream. Since this photosynthesis would probably generate a small amount of nutrients for a hot-blooded creature, they should pass the grater part of their time in hybernation, in order to save energies. Obviously, they would have no escretory system, since they can't afford to lose any not replaceable resource (aka atoms heavier tha Helium).

Unluckily, if they have to grow, there is no way to find suitable nutrients in the space: probably they would be a kind of predator of other space-dwelling species, or would work for planet dwelling humans in order to receive suitable food.

This has already been done, in the book Man After Man. It has a protective shell, pressure-sealed eyes, and highly flexible limbs with a crazy grip. In this case, it is described as being a genetically-engineered and sterile (on it's own) species, but I don't see why it would have to be. While it would be extremely awkward in gravity, I don't see any inherently impossible reasons it couldn't live in gravity.

It is an amazing series of books, and I highly recommend that anyone on a worldbuilding website seek out the After Man books for inspiration. 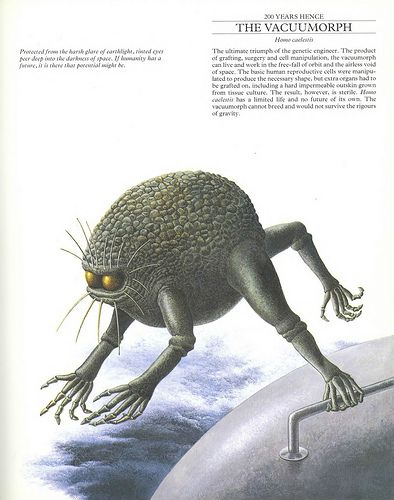 Not the answer you're looking for? Browse other questions tagged science-based creature-design xenobiology space-travel anatomically-correct or ask your own question.