How to ensure the complete destruction of a body in a warfield?

A commando expedition is sent to country A. The fact that they come from country B must not be known in case they are caught in country A.

In order to do so, they need to have a portable way to turn the body and equipment of a fallen soldier into something that would not be recognizable (dust for instance, but anything reasonable goes).

How can they solve this problem?

EDIT: to clarify, the context is not a documentary but fiction, so we assume a commando with high-tech infiltrated over a short period of time into country A (parachute, submarine, ...), that would have distinguishable gear (not an AK-47 but rather an advance rifle, latest+ technology suits, ...). They would clearly not be locals - thus the need to destroy all evidence.

science-based warfare destruction
Share
Improve this question
edited May 12 at 14:49
WoJ
asked May 12 at 9:05

I think it's part of the preliminary courses in counterintelligence that, whenever operatives are infiltrating an enemy country, they have to be equipped with locally available equipment: it makes easier for them to find local replacement or barter them in case of need and it's also easier to dismiss any claim that the operatives belong to the attacker, should they be intercepted. Can you imagine an infiltrated agent driving a Corvette in USSR during the cold war?

This would mean also for the operatives to wear local clothes and obviously no badges/identifiers, unless they are counterfeited ones, again from a local organization.

You are then left with the actual bodies of the operatives and any special equipment which cannot be disguised as local and that is really needed.

For the bodies, a corpse cannot tell its nationality, and again picking operatives which are homogeneous to the local people would help in this direction: don't send a Michael Jordan alike for an infiltration in Yakuzia, rather someone with Asian like appearance. Just ensure that they have the means to commit suicide if needed.

For the special equipment, you can have it either taken away from the other operatives, or you can embed an explosive charge into them to ensure you destroy the sensitive parts, and have it activated on demand.

Generally speaking in a situation where the operatives are facing the threat of being captured with no means of escape you want something quick, so a suicide pill and some explosive are the quickest way to clean as much as possible. Completely destroying a body takes time.

Well, how's that going to help? I hear you ask. Instead of downy feathers or hollow-fiber stuffing in the quilts, you'd use Iron oxide - aluminium based thermite.

It burns hot, very hot, around 2500 Celsius (4532 Fahrenheit) if evenly mixed, it's almost impossible to put-out once it's started burning, it'll melt steel weapons and render to char any electronics, it'll produce goodly quantities of molten iron and aluminium oxide slag to create quite a mess - difficult to disentangle, it will render flesh indistinguishable from scorched and carbonized beef. It also has the virtue of being stable and not-so-easy to light - needing a relatively high temperature to ignite.

They're also relatively lightweight to deploy on a battlefield, one person can carry several, lay one out beside a body, roll the body on, fold the quilt over the top, then use an easy to ignite flash powder to set it off.

As an alternative that wouldn't require extra personnel, or equipment, might I suggest that the thermite be incorporated into the uniform itself. Sensors detecting an end to life-signs would result in automatic self-immolation, this can also be accomplished with a "self-destruct" facility, usable when death or capture is imminent and unavoidable.

You could even go to the extent of placing sensors on each separate limb, such that if a soldier loses a foot or lower-arm, they will after a certain time (so as not to pinpoint the soldier's current location) no longer be apparent on the field - but leaving the soldier to continue the mission if possible. A similar arrangement could be made with abandoned weapons, additional providing for the possibility of a very effective means of arson.

Nukes will solve any problem that requires a considerably high amount of energy being released in short time, which I figure could be about 10% of the questions in science-based.

We have already mathed out the amount of energy you need in order to disassemble a human body into molecules before in these questions:

And here is the source for the estimated amount of energy required to vaporize a person. It is around three gigajoules, which is what you get from a single metric ton of TNT.

That single ton of TNT would only fully vaporize a person in very ideal lab conditions though. Most likely you would get chunks that could still be used for DNA identification. What we need is to dial things up to eleven.

The smallest nuke ever made is the W54. It fits into a backpack specially designed to encase it, as seen in this image from the Wiki: 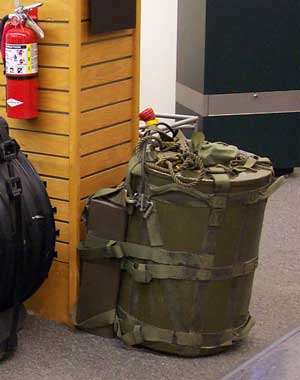 Notice the fire extinguisher, for size comparison. It is quite feasible for a black ops team to carry one or two of these backpacks.

The maximum yield for the W54 is about 1 TNT kiloton equivalent. For comparison, an accidental, disastrous, non-nuclear blast of that yield happened in 2020 in Beirut:

The blast was also felt across Turkey, Syria, Israel, the West Bank and parts of Europe, and was heard in Cyprus, more than 240 km (150 mi) away. It was detected by the United States Geological Survey as a seismic event of magnitude 3.3, and is considered one of the most powerful artificial non-nuclear explosions in history.

The explosion overturned cars and stripped steel-framed buildings of their cladding. Within the port area, the explosion destroyed a section of shoreline and left a crater roughly 124 m (407 ft) in diameter and 43 m (141 ft) in depth.

There is footage of the blast, though it may be understandably distressing to watch.

If you activate a W54 warhead upon a fallen comrade, you will fulfill the hard requirement in the question about body and equipment being turned into something not recognizable. It is also a non-magical solution that is feasible with less than current technology, since the W54 is an invention from the 1950's.

As a bonus, you can also deal considerable damage to the enemy side. The mininuke in your possession might also be a deterrent against retaliation or against being chased when you retreat.

Last but not least - you should preferably be able to trigger it remotely so that you can put some safe distance between you and the teammate you wish to evaporate. You can figure out possible safe distances by using the NUKEMAP (don't forget to set the yield to 1 kiloton before you detonate). For most cities, you should be a couple neighbourhoods away just to be sure.

Not the answer you're looking for? Browse other questions tagged science-based warfare destruction or ask your own question.

76
The opposite to Worldbuilding: World Destruction
7
Destruction of the moon
5
Would a Complete combustion flame breath cause more destruction than a Incomplete combustion flame breath?
7
How to ensure crew safety in an inertial starship
4
How can we ensure that superhuman AIs are benevolent?
4
The Source of Gravity Based Destruction
125
How can I ensure my Evil Tower is always stormy?
6
How much damage could a complete loss of technology cause?
2
How could werewolves survive until their transformation is complete?
2
How can the destruction of a magical ward be made into a gradual process?