What would buildings in a post-nuclear war be like?

I'm writing a short story set in an isolated, small community in an empty desert post-nuclear war (I don't have a specific amount, but I'd say around 110-200 years afterward). I was wondering what housing and other buildings would look like?

They were all built by the people in the community. What materials would be available for them to build with? Thanks for any help!

post-apocalypse nuclear-war
Share
Improve this question
edited May 11 at 21:04
throwawayaccount12
asked May 11 at 16:12 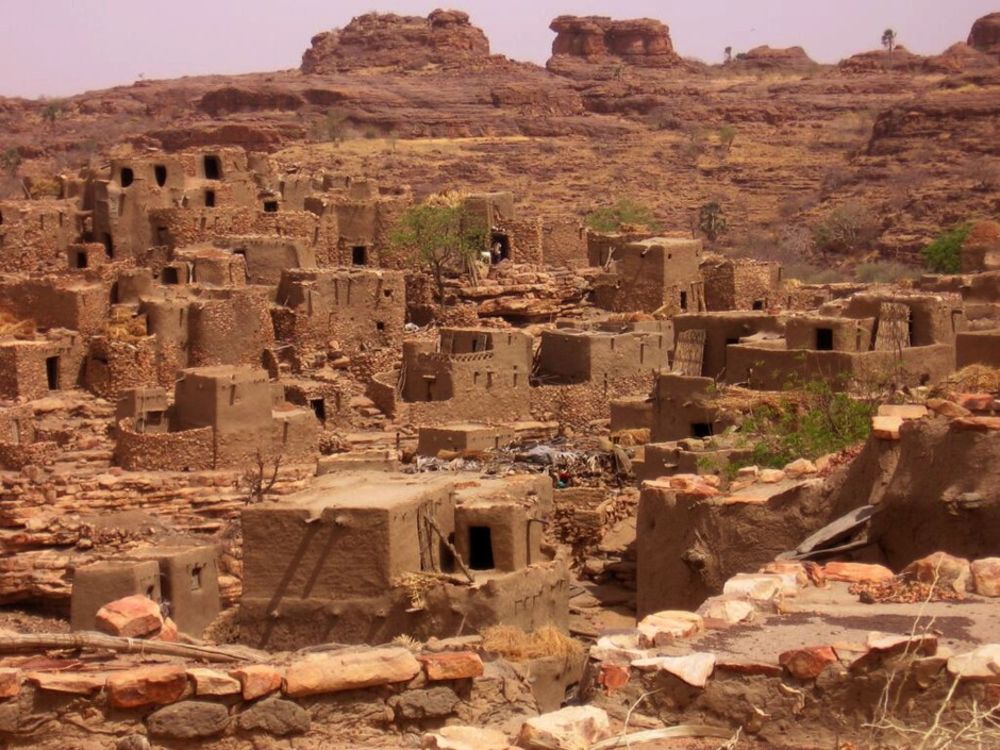 Much like old middle-east or african cities still in occupation today.

In a post nuclear war world, presumably there is a severe deficiency in:

That last point is essentially the major one: Expect educational systems to break down during the conflict and people returning to medieval levels of knowledge. Therefore one would expect the populace to use what is on-hand and that does not require any expertise and minimal maintenance.

Plus Mud structures are well-suited to desert climates with thermal mass providing acceptable temperatures in environments with a high diurnal range.

You'll need to make some decisions about the rules of your world... which is good!

This discussion is going to see-saw back and forth a bit so you can see where you can create rules to rationalize your world.

The consequences of a nuclear apocalypse can be great and varied. Not just radiation poisoning, but illness, genetic mutation (not the Spider-Man kind, but the "shortens your life" kind), lawlessness, panic, and the changes such an event would bring to the environment must be considered. That previous link points out that IMO it's very hard to lose knowledge. Books are everywhere (most knowledge is not yet entirely digital, despite what Google would have you believe). So are resources (stores and warehouses full of goods, old buildings made of brick and metal....). Whether or not these kinds of things affect your community depends on how massive the attack was, whether or not long-term-fallout bombs were used, how much of the farm/ranch/forest land (that not dotted with ICBM bunkers) was affected, whether or not major water sources (lakes, aquifers, etc.) were contaminated, etc.

It's really important to realize that most bomb-made radiation doesn't last much more than 7-10 years (nearly all of the radiation from the tests in the 60s and 70s is long gone). I've coined the phrase "long-term-fallout" to describe a bomb specifically designed to release radioactive particles that have a very long (50-150 years or more) decay rate. It's worth noting that it's unlikely (even unrealistic) that a nuclear war would actually employ such weapons. It's also worth noting that nuclear fallout is neither (A) contagious (you can transfer a radioactive particle from one place to another, but if something has been irradiated, that irradiation can't be passed to something else) nor (B) dense (it's not spread around like peanut butter, it's a dust, and there's only so much dust to spread around).

So, what buildings would there be?

There would be whatever buildings you want there to be based on the rules of your world and the conditions surrounding your community.

After at least 100 years (and we know how fast humans can populate the world in 100 years from a known starting point!), you'd have metallurgy, mining, forestry... which means saws, nails, and hammers. Stick frame housing is very believable. Perhaps sheetrock less so (it would depend on how much your community's infrastructure had grown). Pipe extrusion was first patented in 1797. Wire making has been around since (I kid you not) 3,000 BC. Simple generators aren't that hard to make and your community had 100 years to work on it. Concrete is frankly a given.

Can you see my point about you making decisions? If enough people survived the apocalypse, you'll be right back to 2021 in the time frame you've provided. If enough people died and enough setbacks occurred, then you'll have stick frame houses (maybe log houses, but after 100+ years?). You need to decide how held back your community has been and how that happened.

Very few deserts are actually empty. You have a lot of choices, depending on the lifestyle and tech level of your people.

And a more modern settlement might look like any number of rural Nevada towns, such as Goldfield: https://en.wikipedia.org/wiki/Goldfield,_Nevada

Not the answer you're looking for? Browse other questions tagged post-apocalypse nuclear-war or ask your own question.

3
Post apocalypse, can explosives be methodically removed?
17
Could the entire world have been destroyed by the existing nuclear arsenal in 1962?
25
What could cause a post-apocalyptic, rapid desertification of vast areas of the world, similar to the land in Mad Max: Fury Road?
2
What supplies would be needed to build a modernish town/city in the post apocalypse?
2
Which common military equipment could last 500+ years after an apocalypse?
4
Post- Nuclear Holocaust. Radioactive wastelands vs eco-system and chances of human survivability?
5
After a major nuclear war/disaster, how much radiation would remain after ~300 years?