Reef World 3 - Wandering Islands on the oceans of Reef World

Pumice is a porous volcanic rock that while hard is friable (can crumble). What if my “Olympus Mons” equivalent volcano on Reef World created tons of pumice, and huge chunks broke off and floated away? Could I have huge floating islands of Pumice that go wherever the tides take them, the gas trapped in its pores helping to keep it afloat? Yes, pieces would break off, but maybe they’re so big that they don’t quickly crumble apart?

And would they have plant life on them? I couldn’t find any place that stated that plant life couldn’t happen, but I couldn’t confirm either, other than that pumice is sometimes used in gardening. But it couldn't be nutritious enough for plants, so maybe the islands could have a top layer of other volcanic soil to support the vegetation?

Click the images for a larger view. Courtesy the same source as above. I especially like the first one, which is a floating island on a lake in Finland, which is where I personally saw such an island complete with trees and duck nests gently blown across a lake by the wind. The second image demonstrates a mat thick enough to allow habitation. 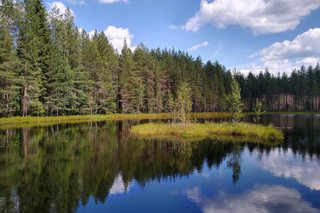 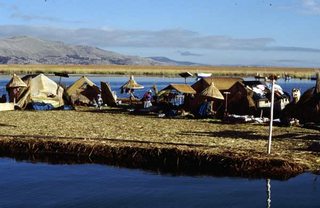 However, @DWKraus has provided a specific piece of information that you must abide by — unless it is a rule of your world to ignore it (which is completely legitimate). From "The Water Logging of Floating Objects" we read:

Very porous rocks, such as pumice, are able to float on water when dry because their bulk density is below that of water. They do not remain dry for long, however: a combination of capillary suction and the hydrostatic pressure in the exterior liquid forces water to flow into the rock. This influx of water increases the bulk density of the rock and ultimately may cause it to sink.

Can you have floating islands? Absolutely. They exist on Earth even to the extent of habitation, so they can exist on your world without significant new rules. Can they be made of pumice? Nope, not unless you make a rule of your world that allows pumice to float forever.

A quick note: the reason pumice sinks when it becomes saturated is because, being rock, it's more dense than water. Once the air pockets are filled with water, the volume of the rock has a net density greater than water. Peat moss, on the other hand, and other organics that make up Earth's natural floating islands, remain lower density. If you want pumice, you need to hybridize it with a material that has a lower density than water such that it's no longer filled with air pockets, but this other, lightweight substance. For lack of a better term (and because it tickles my funny bone), let's call this new substance nougat...

Building off of JBH's answer, habitable floating islands do exist and consist mostly of organic matter. However, you want pumice to make up the island. JBH's answer pointed out that the pumice will eventually fill up with water and sink. But what if it didn't? What if a special bacteria or moss found their way deep into the pumice and began to produce gasses, maintaining the pressure and preventing the water from entering and flooding the rock. Perhaps this organism could also attach different rocks together so as to hold the island together.

As other point out, eventually pumice rafts do sink. They have some other tricky properties.

Wikipedia says they sit about 0.6 metres about water level, suggesting that they are precarious - despite being huge at times, they aren't like icebergs that can be dozens or more metres thick. For comparison sea waves are easily tens of metres high. They also aren't made of huge monolithic lumps like icebergs, but from millions of relatively small fragments, so they can rotate and rub, and have much more surface exposed to the elements. So they are thin, made of millions of little bits of rock, and will deform in overall shape, rotate, jostle, and be swamped, by even a fairly quiet sea.

Despite this, I like the idea and there should be a way to make it work. The flexibility is an advantage if any weight is spread across a raft, and if there's some kind of reason why they can stay a cohesive whole providing support, despite a rough sea.

They also need to have a reason why they don't become waterlogged - a raft can last 20 years (Wikipedia) so its not bad but needs more.

I suggest that these loose pumice rafts are being modified to be suitable for longer term use. Let's see where that takes us.....

Suppose the pumice is created by active volcanic activity within an area of sea/ocean that's largely enclosed, or a landlocked sea. We could imagine that some kind of oil or other coating is pumped into the sea. It floats, and it coats the pumice then sets or bonds with the rock, perhaps as it passes some narrowed area. (Its tricky to make this environmentally friendly but maybe the gases mean its largely devoid of bird and animal life anyway?)

We now have pumice that is coated in some water repellant surfacing, and which won't easily come off. The sea doesnt need to be deeply covered at all, for your raw pumice to all get coated after its bobbed around for a while. (Oil slicks spread out very thin). So quantities are easy. That's one problem solved.

Suppose the surfacing material, as it ages, is sticky. The pumice raft that tends to form, contains small pieces as small as a marble or smaller. The fringes will break apart but internally within the raft they'll tend to stick and coalesce a bit more. The raft will also get thicker.

I think we can chemically handwave the compound to be sticky, float, and very slowly harden like a waterproof oily glue. Pump it into the water, and your developing raft will emerge into the open sea and every piece will be coated with this stuff. The raft that forms will break away at the edges - but the rafts can be tens of thousands of square miles, so even broken up, they could be huge in human habitation terms.

And now you have your pumice problems solved.

Pumice is too porous, they eventually fill with water and sink. the only reason they float is because water has high surface tension and takes a while to percolate into every pore.

Can you have floating islands, maybe...

on another world with alien life, there are ways.

Plants, there are masses of floating plants at sea already, but they can't support any weight. real floating islands rely on being in lakes with no wave action to break them up. however there is no reason a plant could not evolve to be better at floating. maybe even a combination of plants and soft coral that result in floating mats. they will never be very big however.

Drift feeders. There were real giant ammonites on earth, that would easily pass for tiny islands. they were the size of tractor tires and some may have been filter feeders. Floating drift feeders have evolved before, we even have small ones now (man-o-war) you could have an alien one evolve as big as some whales.

Ant like crustaceans. I made this for a story and am glad to give it a new home. A species of crustaceans that is hive dwelling like ants. Basically a cross between an ant and a crab. I made them like leafcutters collecting any organc matter to farm fungi. They make floating hives out of debris bound together by organic threads and resin. These rafts are about canoe sized and often housed sea bird nests, the birds got a safe place to nest in return for scraps, shed feathers, and some defense for the hive. The bird droppings give way to plant life which also help feed the "crants" and supply them with wood and shade which attract prey. Larger islands could be 20 ft across, once a raft gets large enough the hive divides and slowly cuts the raft in half to make two smaller rafts. You can even combine this with plants that evolve to take advantage of these floating rafts and help them float with hollow wood nodules and light weight wood. this will let you get even larger rafts up to small ship sizes.

Can you have huge floating islands, no

Without some handwavium you can't have floating islands or anything we would describe as huge, because wave and storm action will tear anything large apart very quickly. This is actually one of the major limits on ship size, even ones made of steel. ships need to be both very strong and able to bend and flex to be large. Even the crant/symbiotic plant combination will not give you anything larger than a medieval ship.

Not the answer you're looking for? Browse other questions tagged planets geology ocean plant-design or ask your own question.

8
Can a planet have oceans of ethanol?
22
A World with Freshwater Oceans?
6
If Earth's Oceans Were as Deep as Europa's
24
How To Make Earth's Oceans as Brackish as Lyr's
11
How deep can the oceans be while still alowing some land?
6
Oceans of breathable liquid
11
Possible reef world?
4
Massive volcano on reef world?
6
Reef World 4 - Flora
5
What would cause oceans to disappear?