Imagine that you're the admiral of a fleet of warships in orbit around Saturn. You need to capture targets on Titan, the largest moon. (This could also be applied to, say, Venus or one of the gas giants. This is an example. EDIT: this has been pointed out to me as false. This could work on Earth or Titan; that's about it.) You realize that your opponents live in airships (filled with hot air, not helium/hydrogen), not surface habitats!

This makes invasion extremely tricky, as you have no airships with which to board these ships. Instead, you decide to try to pop the envelopes from your comfy orbit.

Please note that the standard tools the fleet has for orbital are not very great for the job because they are massive, heavy "Rods from God" made for absolutely obliterating surface targets. You will need to repurpose an object you already have to be able to complete the mission.

I've been asked to give more information on the resources available.

To respond to @DWKraus's specific questions:

Now, to @Dragongeek's question: why not just use laser arrays? Um... I don't know. From my perspective as an author, it's because that's not nearly as cool as orbital bombardment, but I'm going to need a more convincing reason. I'll probably put out a separate question about that. Just assume that hitting the envelopes with lasers from orbit is not an option.

If my superiors "don't care a ton about deaths" I would target one airship and use it's destruction as an example to force the other airships to surrender.

Rods from God are perfect for this even if the airships are to small to target accurately. Have your engineers hollow out a cavity inside the rods and pack them with explosives. Then target a volley of these Explosive Rods From God as accurately as possible at an airship. When the rods reach an altitude 1k(or whatever your engineers deem appropriate) above the airship the explosive detonates and fragments the rod into a cloud of chunks that rain down.

A volley of these could cause serious problems for any balloon supported airship in the area.

It's a well known fact that meatballs are a universal constant:

G'Kar: It's an Earth food. They are called Swedish meatballs. It's a strange thing, but every sentient race has its own version of these Swedish meatballs! I suspect it's one of those great universal mysteries which will either never be explained, or which would drive you mad if you ever learned the truth.

Dropping them in batches by hand from an orbital posture might take some tricky calculations, but if you've got a space fleet at your disposal, I'm sure you can aim well enough. Will produce many holes of sufficient size to "encourage" airships to land. 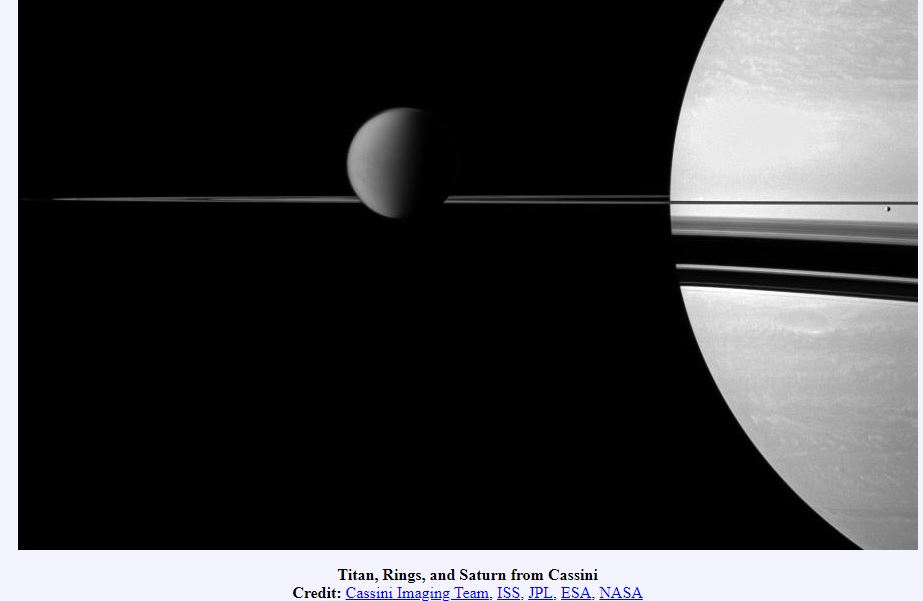 What a sweet photo. But now - on to the mayhem! Your ship snuggles down into the ring and then begins to move along it like a lawnmower. Each chunk you encounter is electrostatically hurled towards Titan, which is following you a couple of blocks away. It is effectively a meteor shower on Titan.

You have a lot of ring to throw. Most will not hit the airships but the people on Titan will see them coming down - because the things you throw will be glowing on re-entry like meteorites do. It will be spectacular and scary. After an hour or so you will pause and let the Titan folks know what you are doing, in case they have not figured it out. You will give them another hour to land their balloons. If you dont see them landing you will turn back on the bombardment.

Who owns the orbitals, owns the planet.

A battlefleet above an unprotected civilian population does not need anything as crass as physical weapons. A simple radio call should suffice. The threat of obliteration should be enough to let the airships do whatever they demand, since everybody knows that they can be grounded or destroyed, at any time.

Any reasonable populace will do what is asked of them, unless they have to fear cruelty by the invaders, or it's a religious zealots situation, but your scenario doesn't look like that. (minimal casualties etc.)

Aerial depth charge. Fill up a missile with more explosive and shrapnel than normal and drop it from orbit. Just have to get close enough to create a pressure wave to either damage them enough to land or make being higher in the atmosphere dangerous.

Just use the rods themselves.

A pack of a thousand rods could easily deliver a yield of around 10% to 100% of the Little Boy nuke. That will conjure a huge mushroom cloud - you don't want to hit the airships with that. But you do want them to be in the vicinity of the cloud so that the blast waves shake them up real good. The airships will be damaged and will have to land for repairs.

18
Why wouldn't a space fleet use their lasers for a precision strike?
5
How would one hack a battleship in space warfare?

6
Accurate orbital artillery without GPS
2
What is the most secure way initiate a kinetic strike?
7
Why would non-kinetic weapons be used for orbital bombardment?
6
Kinetic weapons - establishing an upper limit when dealing with grey goo
0
Are Orbital Rings feasible to construct in another star system?
3
Orbital Warfare Maneuvers
14
How would a planet bound colony clean up an artificially triggered Kessler Syndrome?
5
How would one hack a battleship in space warfare?
18
Why wouldn't a space fleet use their lasers for a precision strike?