What POD Would I Need For Earth's Lost Worlds to Exist Today?

This is a map of Earth as depicted by the DeviantArtist ToonHolt: 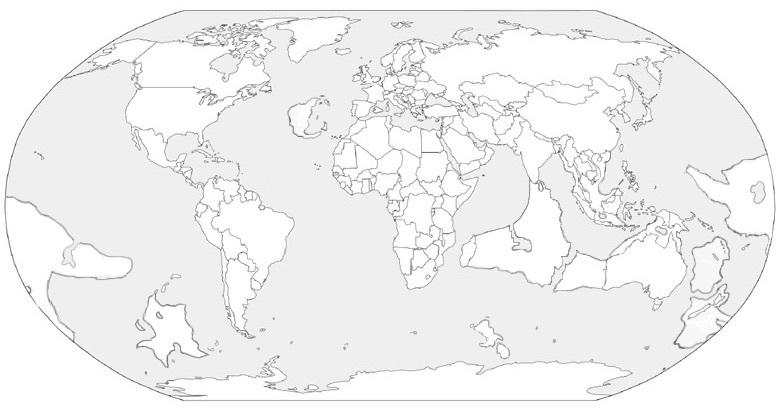 As you can see, many new landmasses have been added, from lost worlds like Sundaland, Zealandia and Kerguelen, to fictional worlds like Mu, Atlantis and Lemuria. Some of these extra landmasses used to exist, others never did.

But in the event that this is a map of Earth in the 21st century CE, it would require a massive point of departure, one in which humanity would be butterflied out of existence. Before we get to the geography and the climate, the first question would be:

What point of departure, chronologically and geologically, would be required for this kind of Earth to exist?

Your point of departure would be the formation of the Earth. New landmasses like this one are necessarily very old continents, shields and cratons, going back billions of years.

There isn't a certain "point" in time where we could change something, and have the outcome portrayed in your image. Making that require changing how plate tectonics have worked on Earth, the rate and distribution of continental crust growth, or a different core-mantle dynamical setup during Earth's formation 4.5 billion years ago.

This means that evolution of life on Earth would have necessarily been different, and whether homo sapiens evolved or when is an unanswerable question.

Geologically you are adding a tremendous amount of continental crust. The earth has not added significant amount of continental crust since at least the Archean So that is the latest you can add that much continental crust without drastically changing the earths geologic history. Even then the earlier you add it the better the Archean starts at 4 billion years ago and ends at 2.5 byo. 3-3.5 billion years is more likely but 2.5 is minimum. IN reality you are changing the composition of the earth so you should probably go back all the way to its formation but for a story you can fudge it to the Archean.

Since we don't know many of the factors that caused humans to evolve, you can say humans evolved on your world an no-one can really argue. There is no logical reason they couldn't, your world could still have trees, mammal and primates.

As an upside relevant works are so old most are open source.

Not the answer you're looking for? Browse other questions tagged science-based hard-science alternate-history geology alternate-earth or ask your own question.

6
Largest possible man-made planet-like body
10
Determining climate and biomes in a non-planetary setting
9
Mechanism for high geographical change but not killing everything
5
How Would a Continental Landmass Sink?
5
Is it at all possible to have a populous, formerly colonial nation in the Indian Ocean?
11
Terra Australis: How can I minimize the effects of its existence on the climate in the rest of the world?