How could the blood be improved so that it can carry more oxygen?

I'm writing a story about scientifically plausible superhumans ( a new genetically enhanced human species that is mentally and physically superior to ordinary humans ), and one of their main features is the ability to hold your breath for a long enough time ( more than thirty minutes), but without lowering your metabolic rate.

At first glance, the most obvious solution to my problem would be to increase the volume of my superhumans ' lungs so that when they inhale, they can inhale more oxygen. But in this case, I need to improve the ability of their blood to carry oxygen. After all, blood circulation performs one of the most important functions of transferring oxygen from the lungs to the tissues, and carbon dioxide — from the tissues to the lungs. The oxygen consumption of tissue cells can vary significantly, for example, during the transition from a state of rest to physical activity and vice versa. In this regard, the blood must have large reserves necessary to increase its ability to carry oxygen from the lungs to the tissues, and carbon dioxide in the opposite direction.

Hemoglobin is able to capture oxygen from the alveolar air (a compound called oxyhemoglobin) and release the necessary amount of oxygen in the tissues. A feature of the chemical reaction of oxygen with hemoglobin is that the amount of bound oxygen is limited by the number of hemoglobin molecules in red blood cells.

Question: how would it be possible to increase the number of oxygen molecules that could be carried by the blood?

Note: if you have to sacrifice your hemoglobin for something else, I'll be happy to hear an alternative.

creature-design hard-science biochemistry
Share
Improve this question
edited May 6 at 11:24

I'm not sure hard science is the best fit for this question, but I'll give it a go. I think the key element you are looking for is aquatic mammalian myoglobin. There is a good set of review articles here on the subject. The biochemistry gets pretty technical, so dig in deep to the second link to get the hard science.

Basically, cetacean myoglobin is able to reach much higher levels than most mammals, but is structurally a little different to reach these concentrations. It stores oxygen, releasing it in the muscles over time. Seals, for example, can achieve up to two hours of dive time, although this is likely at a much-reduced activity level. But 30 min at a reasonably normal respiration should be achievable. Big brains are also greedy for oxygen, so this will also come into play. Dolphins, for example, get to only about 12 min on dive times.

Biology is all about give and take, and I'm guessing there are consequences to having all that atypical myoglobin. It may function differently in non-diving conditions, it may have a very high energy cost (to make/maintain), it might function best at high pressures (like underwater) but the science of "this-is-better-than-that" is always highly speculative and not a good match for the hard science tag.

synopsis: H2O2 is a concentrated liquid source of O2 gas with available O2 increasing as concentration of H2O2 increases. Stores of oxygen as H2O2 could be tapped during long breath holding.

All hail the peroxisome, ancient armor of our ancestors!

Peroxisomes are tiny intracellular organelles, a 50th of the size of a red blood cell. They handle hydrogen peroxide for us - detoxifying it when it accumulates and producing it when needed for oxidative metabolic functions / offensive oxidative attacks against invaders.

So: except for the noneukaryotes in the audience, we all have tiny spaces which are fortified against the corrosive effects of H2O2. In this scenario, H2O2 serves as an oxygen source. Can one produce O2 from H2O2? Yes, and in generous amounts. A 3% solution of H2O2 will produce 10 times its volume of O2 gas. So a liter of 3% solution makes 10L pure O2. I am fairly sure that the internal concentration of H2O2 in a peroxisome is less than 3% but let us use 3% - nothing will burst into flame and these are supersoldiers after all.

Peroxisomes are the size of platelets. We will fortify the blood with a liter of 3% H2O2 peroxisomes circulating. We will stash another liter in the liver and a third in the tissues. At cost of 3 extra liters volume we get enough O2 for 30 min moderate activity.

The peroxisomes can just dump peroxide into the blood and the oxygen produced by endogenous catalase will be swept up by RBC. These researches injected H2O2 into bags of deoxygenated blood, which perked them right up.

THE OXYGENATION OF BLOOD BY HYDROGEN PEROXIDE: IN VITRO STUDIES 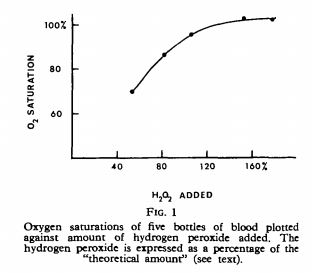 I think these folks were using 30% peroxide and so a tenth the volume of the 3% in my scenario. Peroxide packs a lot of O2!

Using a blood substitute you could improve this.

Perfluorochemicals can carry several times more oxygen than red blood cells. They could be adapted for that. Along with other minor efficiency boosts, this could let them survive longer underwater.

There was a good article about this a while back: https://foresight.org/Nanomedicine/Respirocytes.html

Now, this was talking about artificial respirocytes, but the general concept remains.

Long story short: whereas red blood cells mainly store O2 in solution and/or chemically bound, if you store O2 under pressure instead you can achieve a much higher capacity if you have the materials for it (and the nanotech to be able to actually construct the thing).

Not the answer you're looking for? Browse other questions tagged creature-design hard-science biochemistry or ask your own question.

23
How to make “humans” that can hold their breath for a long time?
8
Creating a scientifically semi-valid super-soldier, part 4: respiratory system

14
Is a four armed arboreal reptile as described viable?
5
How does my critter communicate across the liquid/air barrier?
15
How could an Earth-like planet develop huge pinkish-purple forests on ocean surfaces?
6
Which hydrogen halide to have in blood to replace water?
3
How do I explain the compound eyes of my creatures?
6
Biological creation of respirocytes and clottocytes?
0
Can you breathe underwater with fluid-filled lungs?
7
How to avoid respiratory and circulatory problems in a firebreather or flaming creature?
3
Is it medically possible to give someone super strength with gene editing?