Placing a planet on the famous Escape Velocity Graph

If I'm understanding the chart correctly, in order for a planet with lower gravity than Earth (smaller than Earth), but with decent magnetosphere, to hold on to an atmosphere with oxygen, and water on the surface, that planet would have to be in the blue but can be close to the green (between Venus and Mars)? 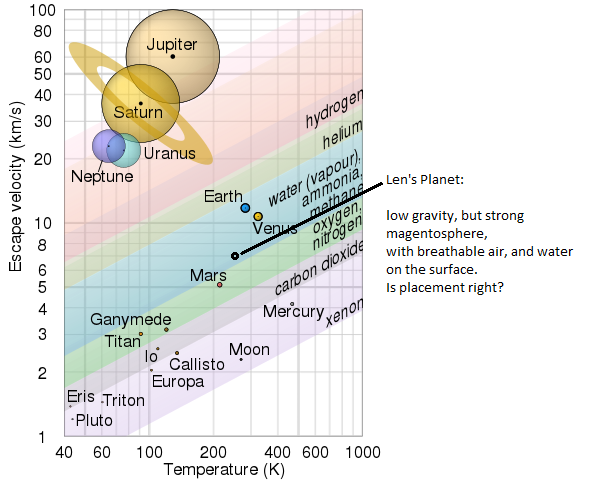 And if I'm way off, please don't laugh at the science noob.

But you CAN laugh at the fact that I wrote magentosphere in the graph, instead of magnetosphere.

Atmospheric particles are constantly moving around at enormous speed. For instance, the typical air particle (the kind you're breathing right now) at room temperature moves at around 1,000 mph. Since there are trillions of them, all moving in random directions, there is no net motion.

Earth's escape velocity is around 7 miles per second. If a gas particle is at the top of the atmosphere, and it suddenly achieves this velocity (as trillions are doing at this second), it will leave Earth's orbit, never to be seen again. However, in order for a gas particle to achieve this velocity, it typically has to be smacked by some very high-speed radiation.

I would say that's a tad too cold to have liquid water on the planet. If there is water it will be frozen.

Remember that at 1 bar water is liquid above 273K, so if you want liquid water, you need a temperature above that (or higher pressure).

Strictly speaking, the escape velocity would decrease, but the surface gravity wouldn't necessarily change, depending on your planet's parameters. The two are determined by the mass $M$ and radius $R$ by $$v_e=\sqrt{\frac{2GM}{R}},\qquad g=\frac{GM}{R^2}$$ with $G$ the gravitational constant. You've picked the escape velocity, but we need to know another parameter to determine the surface gravity. Picking a mass or radius would work, but I think it's better to specify a density. After all, you don't want your terrestrial planet to have the density of gas! This gives us a third formula, for the density $\rho$: $$\rho=\frac{M}{\frac{4\pi}{3}R^3}$$ If we specify $v_e=7\;\text{km/s}$ and $\rho=5.5\;\text{g/cm}^3$, the density of Earth, we find that the radius of your planet is $R\approx0.56R_{\oplus}$ and the mass is $M\approx0.18M_{\oplus}$, leading to a surface gravity of $g=5.6\;\text{m/s}$, which is indeed lower than Earth's but still fairly reasonable! So it turns out that we didn't have to be concerned after all.

In fact, if you do out the algebra, it turns out that $$g=v_e\sqrt{\frac{2}{3}\pi\rho G}\propto v_e\sqrt{\rho}$$ This means that you do have to change the density significantly to get a significant effect on the surface gravity, unless you're willing to change the escape velocity a bit.

Looking at some exoplanet models (Seager et al. 2008), it seems that this would be reasonable for a planet with more iron than is found in the terrestrial planets in our Solar System. There would still be quite a lot of silicates, as is the case on Earth, but you would need iron to reach the requisite density. After all, your planet is roughly the same radius as Mars but 80% more massive.

The temperature also looks fairly reasonable. You could honestly increase it a bit to make it easier for liquid water to exist, and all that would require is making its orbit slightly smaller or making its star slightly brighter. If your current temperature is about 250 K, you could raise it to 280 K (closer to Earth's temperature) by decreasing its orbital radius by about 20%.

Not the answer you're looking for? Browse other questions tagged planets atmosphere habitability ocean microgravity or ask your own question.

2
A Blue, Drenched Mars
32
Terrestrial Exoplanet Skies – I've Built a Visual Sky Chart. Is it Correct?
11
How do I increase air pressure for the planet Mars?
18
Can a habitable moon rely on the magnetosphere of its parent planet for radiation protection?
7
Given the mass and composition of a planet, can one determine what the radius should be?
6
What are materials that could give an atmosphere a deep blue color?
6
Super earth habitability
7
Can my planet have a very thin atmosphere only at the poles?
4
What would it look like if an artificial atmosphere began to disappear?