Could a jet engine that uses water as fuel work?

Could a jet engine that uses water work?

The idea is that water is sucked in, compressed, and boiled instantly by a dozen mirror focused industrial grade lasers. The resulting super heated gases would be routed out of the engine via a pipe able to adjust where the gases go by up to 10 degrees in any direction. This engine would be mounted on a submarine. Some of the hydrogen and oxygen would be collected for energy generation and life support. Some sodium (from the salt in the water) could also be used in the food. Could this design work in a real ocean? Please tell me any flaws in the design.

Let's analyze this step by step.

That said, if you have a reliable source of high heat, using steam for propulsion might be possible. But if it would provide an advantage over propellers, nuclear subs would already do that probably. Since nuclear reactors primarily produce heat, it would be advantageous for them to not have to produce electrical power first.

You have updated the venerable pop-pop boat. 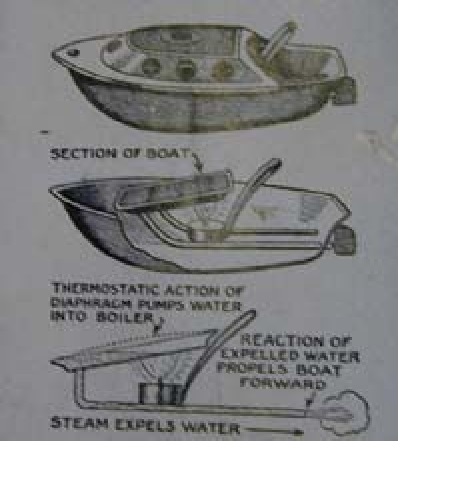 Pop-pop boats are sweet. They boil water and use the steam for propulsion. The vacuum caused by the steam leaving the boat causes the water reservoir to refill.

Historically these were powered by a candle. The update here is the LASERS. A good reason to heat things with lasers is that the lasers are heavy but you can heat things at a distance so you dont need them on your boat. They can be on shore. There are proposals for space ships that fly because distant lasers are boiling water on their tail ends to propel them with steam. This is laser propulsion and you are here using it to make steam for a boat. That is fine!

I hope you have supersniper robots keeping the lasers aimed at the boiler or I might be nervous waterskiing behind this boat. Also some robots need to keep anyone else from coming out on the water, because there are lasers. That also helps make waterskiing better because I have the whole lake.

The lasers would look cool at night because you would be able to see them in the mist coming up off the water. It would be like a rock show, and you could play Pink Floyd from the boat. Maybe you could get the pop pop engine to go in time with the music but that might require another robot.

Vaporizing water does not produce oxygen or hydrogen; It produces water vapour.

To produce hydrogen and oxygen from water you need electrolysis, not heating, and so cannot contribute to propulsion. And you still can't use the hydrogen and oxygen to fuel your ship because it takes more energy to crack the water than you can get back from it by burning the hydrogen with the oxygen. If it didn't you would have a perpetual motion machine.

You might as well hang onto your fuel and use it directly for propulsion and not waste it in a roundabout, energy-wasting process.

You might be able to use water as a reactant to combine with the vessel's fuel (in effect giving you bonus fuel because you get reaction mass from the outside), but you are wanting to use water as the only fuel source.

Unfortunately, water is fairly stable. It is a product of the decay of energy-rich compounds. It is less energetic than elemental hydrogen and oxygen gas (which is why, when you burn hydrogen, energy and water are released).

This means you can't use any chemical process using only water for fuel to generate more energy than you put into the system. It doesn't matter how you try to break the water apart, the laws of thermodynamics require you to pay for lunch. There ain't no such thing as a free lunch.

The vessel would need to go nuclear

There is, in fact, a way that to extract more energy from pure water than you have to pump into it. Fusion. The first problem is we don't have working fusion reactors, so this requires sci-fi future tech.

The next problem is you want a jet engine. Even if you have futuristic fusion plant technology, this would be a plasma jet engine, and the problem with a jet of radioactive plasma exhaust hot enough to undergo nuclear fusion is it will be essentially impossible to contain in an engine. The plasma will destroy the engine.

Here's my concern even if everything else worked, which is not certain at all.

This is for a submarine, it is supposed to be stealthy. Your sub would have a huge thermal signature which could be detected. Then send in a few heat seeking missiles (i.e., torpedoes) and they are going to go straight for the engines and blow you to smithereens.

If and only if stealth was a non-factor would this even be useful. If you were exploring the ocean floor for scientific reasons and not military.

You have water. You have electricity (which you'd have needed for your lasers anyhow). You even have air since you're in a submarine, not a spaceship, just need to surface occasionally to resupply. Congratulations: You can make hydrazine. Electrolysis to split the water into hydrogen and oxygen. Mix the hydrogen with nitrogen from the air, and you've just made hydrazine, a powerful rocket fuel. (It's slightly more complicated than that, but easily explainable with tech-tech.)

Caveat: It will probably not be very stealthy, but you'll be one of the fastest subs in the ocean, and you might not need stealth all the time if you can outrun everything. You'll probably want to use a more conventional propulsion when you're not in a hurry and want to remain undetected.

You're pointing the lasers in the wrong direction - there is a technology called supercavitating torpedoes, which point an infrared laser or other gas generating technology in the direction of flight so they can travel flying hypersonically in a bubble of steam rather than having to push water out the way.

So, most of the issues have mitigations for some applications, the only issue is to create thrust without scaling up with deposits. Something like an Aerospike might work, where the expansion is around a core and bounded by the fluid rather than within an enclosed tube like a ramjet would be (the VA-111 does use a ramjet with water as reaction mass, but it has to operate for a minute or so so it doesn't matter if it would be clogged after an hour). Or maybe just turn it off for a few minutes per hour so the water gets to it and most of the deposits can redissolve.

The engine rips the water into hydrogen and oxygen, cold-fusions the hydrogen for energy, and uses the energy proceeds to jet the oxygen and fusion by-products out the rear.

Not the answer you're looking for? Browse other questions tagged science-fiction underwater propulsion .

4
How could an amorphous blob create rocket fuel?
4
Could traffic lights work underwater?
6
Could modern sharks adapt to live in deep water?
9
Could a microorganism reproduce so fast that it can be used as a sustainable “burnable” fuel source?
6
Help cooling living H$_2$ fueled pulse jet engine
10
Which is easier to develop: a piston prop engine or a jet engine?
14
Is it possible to make a "safe" electromagnetic "jet engine" using extremely long wavelengths?
3
How could I make an ion engine work within an atmosphere?
7
What would be the uses of a technology that could make things "not-exist" for a short period of time