It would be possible to enter and exit a black hole using a Warp Drive? [closed]

Well, a Warp Drive expands and contracts space, passing it through you, technically allowing faster than light travel.

And so, it would be possible to actually enter a black hole and thus, exit it?

I can imagine you would require an enormous amount of energy, and probably, outside the black hole, it would have passed thousand of years. Or I'm wrong?

There are a lot of ways this could be no

One thing about trying to enter a black hole is that the conditions just outside of the event horizon tend to be very hostile.

With smaller black holes, the main problem is gravitational shear which makes it very unlikely for matter to survive entry into a black hole in any recognizable way. As any body made of matter approaches an adequately powerful gravity source, there is a point called the Roche limit whereby the shear caused by differences in gravity on the parts closest and farthest from the gravity well rip it apart. Generally speaking the smaller you are, and the stronger the bonds are that hold you together, the closer to the gravity well you have to be to reach your Roche limit. This shear caused by smaller black holes is so strong that you will get millions of Gs of shear per meter of body size. No solid matter, theoretical or otherwise will hold something the size of ship together under that much shear.

Larger supermassive black holes (~100 million solar masses and greater) tend to form quasars. These black holes have coronae of closely orbiting gases around them that compress to initiate a sustained fusion reaction. The sustained power output of a quasar can be reach as high as $4 \times 10^{11}$ times that of the sun... so just getting within a few AU of certain black holes would turn any solid matter into plasma due to the energy output of its accretion disk.

So, you can't just go flying into any old black hole. That said, the milky way has a nice medium sized supermassive black hole called Sagittarius-A which is neither big enough to form a sustained quasar, nor small enough to to cause extreme shear. At about 4 million solar masses, this black hole has an event horizon shear of just .005 G/m which is not just survivable, but would barely be felt. So, any theory that says you can enter a black hole has a much better chance of success on a medium sized supermassive black hole than on a really big or small one, but your problems don't stop here.

Now, what happens when you cross the event horizon depends on whether space is continuous or discrete (which we do not know for sure). Most models of space-time assume that space is continuous meaning that you can zoom in infinitely and never reach an indivisible unit. Following this model, you can physically enter a black hole because the mass all gets infinitely compressed at its center. But if space is discrete to the scale of a Plank Distance as some theories stipulate, then a black hole is not actually infinitely compressed, but rather it would be compressed to fill every available unit of space inside of the event-horizon meaning that your ship would be slamming into an impenetrable barrier by trying to go into the black hole... so we can also assume that any theory that says yes requires a continuous model of space to be true.

Now, assuming you can enter a black hole, there will also be the issue of time-dilation. Once you cross the event horizon, you would no longer experience time; so, you would be unable to take any action to initiate your warpdrive as you fall deeper into the gravity well at the speed of light. If the core of the black hole is infinitely compressed, that means that gravitational shear will approach infinity as you fall into it regardless of the black hole's mass. Eventually, it will become so extreme you are ripped apart at the molecular and then subatomic levels, and there is nothing you can do to stop it.

When you say "warp drive" you may be referring to an Alcubierre Drive, since Alcubierre Drives move you by creating what is essentially a white/black hole pair, you could postulate the possibility that your crew could use a warp drive to smooth out the gradient of the black hole by projecting a powerful negative mass behind itself and a positive mass in front. If controlled VERY precisely you could create a gravitational platform for you to ride on. Larger black holes would make compensating for shear a lot easier, but you could in theory do this for just about any sized black hole. While on this platform, you could nullify both the shear and the time gradient giving you the freedom to further bend you platform accelerating you out of the black hole when you are ready. 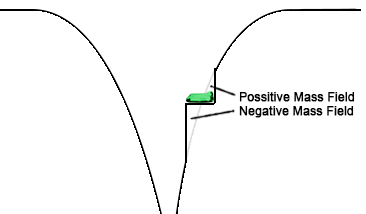 Not the answer you're looking for? Browse other questions tagged science-based physics black-holes faster-than-light astrophysics .

8
Escaping a blackhole with an Alcubierre drive?

5
Protocol between an information sharing black and white hole pair
2
Travel (how far?) into the future using a black hole and light-speed space craft?
5
Can I contain and control a small black hole within a facility?
7
Alcubierre warp-lanes, what is the most stable way to create them?
2
What kind of faster-than-light travel is this and is it at least plausible?
7
Could I observe the black hole that created my area of space/universe?
6
What's the Use of a Susskind Hologram?
22
What are plausible faster than light methods for a far advanced civilization that aren't a warp drive