Could one make decent armour based on a jaguar pelt?

I have always loved the fursuit uniform of the Aztec Ocelotl warrior: 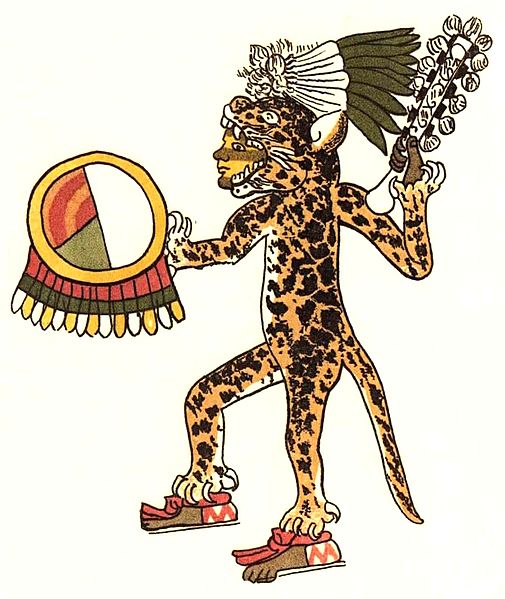 But, to my great disappointment, it turns out that in reality the suit was not made out of an actual jaguar pelt: the helmets were in fact wooden and the body part painted cotton. That's more animal-friendly, but less badass.

I want to know if it makes sense for the rich (who can afford it) to wear actual jaguar fur, and taxidermied heads for helmets. Assuming that the dimensions work out. My concern is more whether it would make for suitable armour.

Note that this theoretical suit would be made with armour as its primary function. The word "taxidermy" may not apply perfectly well. My intent is that you have a jaguar pelt, you treat and reinforce it in some manner (as long as it retains the appearance of the animal) and you put it on to go to war.

Specific concerns that determine armour suitability for this thing:

I also wish to keep using the jaguar's skull; both to shape the jaguar's head and to help protect the wearer's head. There can be padding inside to make it fit, perhaps even wooden reinforcement if necessary, should the bone become brittle as it dries out.

What do you think, could this work as armour? Do I have any of the above plainly wrong, and/or are there any other weaknesses that would make this suit a poor fit for the battlefield?

Looking at the three concerns specifically mentioned in reverse order:

The jaguar uses a stalk-and-ambush strategy when hunting, rather than chasing prey. The cat will walk slowly down forest paths, listening for and stalking prey before rushing or ambushing. The jaguar attacks from cover and usually from a target's blind spot with a quick pounce

The jaguar is also primarily "active" during the night (or daytime in heavily shaded forests) and, like most big cats, pants or goes swimming to cool off.

None of this applies to humans. Humans warriors in primitive societies are primarily active during the day, tend to engage in prolonged medium-to-high intensity activity during hottest periods (rather than a slow wander followed by a brief pounce) and rely on perspiration for cooling rather than panting. Thin cotton leg and arm coverings are porous enough to allow effective cooling and even quilted cotton torso protection can be made breathable, but tight fur is not an option. Speaking from experience - in a tropical environment wearing a helmet, body armour, loose-fitting long-sleeve cotton shirt and cotton trousers is bearable but unpleasant. Heat exhaustion will nail you if wearing anything less breathable while exercising for any extended period.

The best way to ensure that your fur will last for many years is to have it professionally cleaned and stored through the off-season by your local retail furrier in a temperature- and humidity-controlled storage vault.

Another site provides this advice:

FUR HATES THE HEAT BUT LOVES THE COLD

Nothing shortens the life of your fur like keeping it in your closet during a long, hot summer. If at all possible, we suggest you store your fur garments in cold storage when you have finished wearing it for the season, this is one of the most important steps you can take in preserving your furs.

This one is hard to be certain on - layering materials on top of armour sometimes has unexpected or counterintuitive consequences, where an additional layer can actually make things worse by making certain weapons more likely to "dig in" and do damage rather than ricochet off. I cannot see any way to test this particular scenario without extensive testing using reconstructed armour and weapons - this would be really fun to do, but I lack the time and budget.

As for using the skull of a jaguar as a helmet - the skull really isn't the right shape and even the skull of the largest jaguar known would be too small to fit a midget's head. In order to use a jaguar skull as a helmet it would require a skull about twice as wide as that of the widest known specimen and then would still need extensive carving to take out the internal structure. The eye sockets of the skull would be a massive weakness if the wearer was attacked from the side. So even disregarding the size issue (which also applies to the legs and arms of the suit) a jaguar skull would be a poor helmet for a human warrior.

My advice at the end of this for the well-off Ocelotl warrior with an excess of money and willingness to be uncomfortable is:

The processing of the skin in Taxidermy is focused on retaining the natural appearance as closely as possible. Flexibility and durability are distant secondary goals. Wearbility is not even considered. Very often, the chemicals used in taxidermy to process a natural pelt are quite toxic.

For leathermaking, the opposite is true. Durability is paramount, with strong attention to wearability, safety (no toxins, no allergens, no dye transfer), and some attention to appearance and texture.

For armor the same is true with an even more different balance. Strength and durability are paramount, while comfort and appearance are of secondary concern.

Simply put, taxidermied Jaguar will look very impressive, but will not be waterproof, safe or easy to wear, and will have the damage resistance of wet paper towels.

Great for ceremonies, suicidal to wear into battle.

The reason why the jaguar pelt is not a good armor is that is does not offer good defense against common Aztec weapons. One real common weapon was simply a handle with a good sized rock embedded in the end. A wooden helmet offers much better protection against that. You state that the jaguar fur protected the jaguar, but that was also in context of an animal that could move much faster in tight places than humans can. The jaguar does not depend on its pelt for defense, but relies on its claws and teeth. The cotton armor is not simply something like jeans material. It is possible to process cotton so that it is much thicker with interlocking fibers that resist stabbing or cutting where the pelt would not.

Yes. The trick is to put a taxedermied jaguar pelt on top of normal armor.

Would it protect as well as competing armors?
It took me almost 30 minutes to find a reliable source, but Aztec armor includes the ichcahuipilli and the amatzoncalli. The former is made of cotton or wool, and the latter is made of paper. It should be easy to sow or glue a pelt on top of these materials. The helmet would not be made from a jaguar skull, but it would look like one.

Would it last as long as competing armors?
The armor could to stored in a cool place to preserve the pelt's quality. Assuming the competing armors were not designed to last through many battles, by the time the heat damaged the pelt the armor would have to be replaced anyway.

Is it suitable for a tropical climate?
From a physics point of view, layering anything on top of anything increases insulation. The greater this effect is regarding jaguar fur, the more energy the jaguar needs to spend on thermoregulation. This heavily implies that the armor's additional layer would not significantly increase the insulation of the armor, assuming the taxidermy process does not cause anything weird to happen.

Would warriors desire cosmetic changes such as this?
You did not ask this question, but since the pelt is purely cosmetic this is a reasonable question to ask considering how much effort is needed to kill a jaguar. Some medieval armor included a metal codpiece (SFW, but you may get some weird looks). I think the effort of mining, smelting, and forging metal is comparable to that of killing a jaguar, but I do not have a citation for this.

Not the answer you're looking for? Browse other questions tagged alternate-history armors .

43
Would armour made of spider silk work?
16
If it could be shaped, would chitin from giant insects make decent body armor?
5
Would keratin, spider silk, and bone make good bio-engineered armour?

7
How to make nuclear armour?
7
What WWII technology could make a smart, underwater mine?
5
How advanced could someone make a firearm with Medieval Technology
11
Could the development of a body armour that completely stop any small arms' fire make a civilization go back to medieval-style combat?
7
How difficult would it be to use scrap metal from a car to make armour or an effective short sword without using fire?
11
What information could a Time Traveller give to Nazi Germany to make them win WWII?
16
If it could be shaped, would chitin from giant insects make decent body armor?