So, one of the species in a fantasy world I'm working on is a lemur like species that stands around 3-4 feet tall, or about the size and weight of baboons. They have very strong legs with opposable digits on the foot. (mostly just the ability to grasp, but not with much finesse), and short, claw-like nails. The legs are quite good for jumping, with kangaroo like power to them.

They have short and lanky arms, which are not nearly as strong as the legs. This is not my own depiction, but a creature of similar proportions from a video game to give you an idea of the body shape of these creatures. 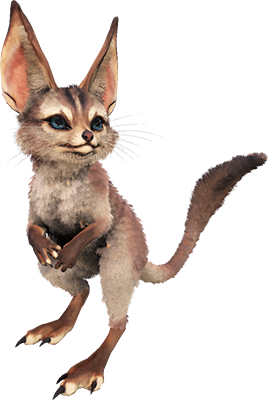 They are intelligent, and capable of primitive iron and metal working. They sometimes live in trees or in burrows for protection against larger animals. Other times, they make stick and mud huts. Recently they have come into conflict with humans who wear armor such as gambesons and chainmaille. So they have a need for powerful projectile weapons to pierce their defenses from a distance.

I was thinking, that given that their legs are much, much stronger than their arms, if they might use foot launched javelins or atlatls or some other type of weapon. Any ideas of how this might work or be made feasible is welcome.

Also feel free to post a response if you have other good ideas for tactics or weapons they could use that would play to their strengths!

Getting a leg up on archery:

Those poor humans have such limited legs, good for only shuffling weight back and forth. Fine for an endurance hunter from the plains, but they'll never measure up to us Lemurians! For we are the greatest archers on the planet.

How so, my pathetic human friend? With such small arms, how can we pull a bow? Silly! We use our legs to shoot bows.

There are three ways your species can fire bows. 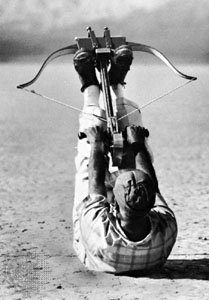 The shooter lays on their back, with their feet towards the target. Their feet are braced on the bow with the arrow between them, and the hands anchor the string (possibly with assistance from a strap or hook anchored to their torso). To fire, they span the bow by extending their legs, line up the shot looking down the length of their body, then release the bowstring. 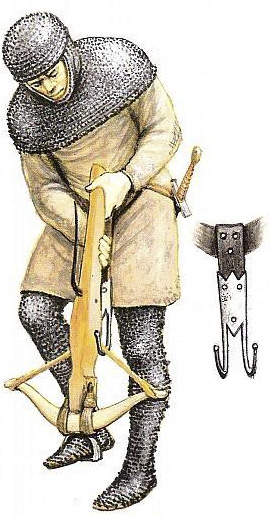 Somewhat similar in operation to the foot bows, but can be used while standing. A hook on the shooter's belt and a stirrup on the end of the crossbow allow the shooter to use their leg strength to span the crossbow, rather than needing to pull it back by hand.

Legs are made for walking and not much else so there is very little you can do to weaponize them for ranged combat. Since these creatures are limited to primitive works and their enemies also wield primitive weaponry and armor, there's honestly not much you can do within these confines.

Their habitation seems to be extreme considering they can live in high trees or burrow into the ground at the same rate. Normally creatures can do either one or the other but never both simultaneously, so I would suggest you ditch one of those concepts or split them into two species. The species with the well developed legs can live in the trees while its counterpart has well developed arms and lives underground (having weak arms is a death sentence for a burrowing creature, a significant handicap at best).

As far as the species with well developed legs goes, they could be living in high trees and relying on their jumping capabilities to clear the gaps between trees without running on surface. Having well developed legs also allows them to negate most of the falling damage and allow them to jump down from great heights, which could be used offensively. If you want to go on the offense, since these creatures apparently are capable of metalworking, you could have them develop leg armor that allows them to jump straight down at the enemy and use their falling momentum to deal crushing damage to the enemies, practically instakilling anything they manage to land on and then rely on their jumping to escape. This means basically turning them into living, crushing projectiles with lethal crushing force.

On another note, since these creatures do live in trees, they could simply rely on remaining hidden and bombarding their enemies with pretty much anything with any noteworthy weight they come across. Coconuts, stones, metal objects, all of them pose a significant threat if being thrown from a reasonable height, especially if thrown upon an unsuspecting target. If they score a direct hit and the target doesn't have head protection, that's instant death, and if they do have helmets that's still quite a concussive blow to suffer. Yes it's crude and rather simple, but it's brutally effective... and if it isn't broken there's no need to fix it...

Spears thrown from the feet are a thing. I recall tales of Cúchullain, who had a barbed spear (Gáe Bulg) which was said to have been thrown with the toes.

Not the answer you're looking for? Browse other questions tagged weapons medieval fantasy-races or ask your own question.

27
Projectile weaponization of water
11
What would be the best fighting styles for a humanoid with a low center of gravity?
24
Feasibility of Centaur Hussars
12
Mermaid Land (and Sea?) Combat
6
Building structures underwater: What could a giant crab do?
33
What projectile weapon can replace a bow under the following circumstances?
4
Other metal alloys as armor/weapons
1
Feasibility of Anti-Mass Weapons
15
What weapons would be used to kill giants by a viking era civilization?