How do you navigate on a cylindrical world?

In my setting, the inhabited world is basically a huge cylinder sticking out of the pole of a gas giant with a breathable atmosphere: 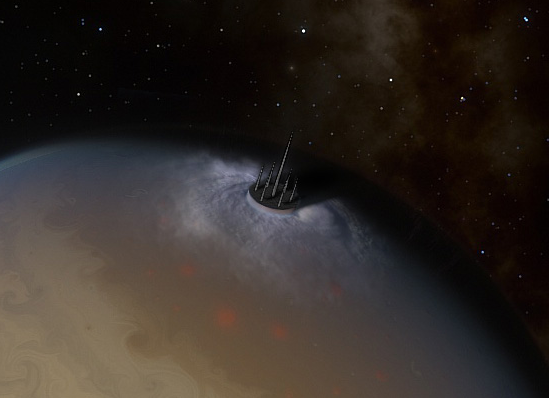 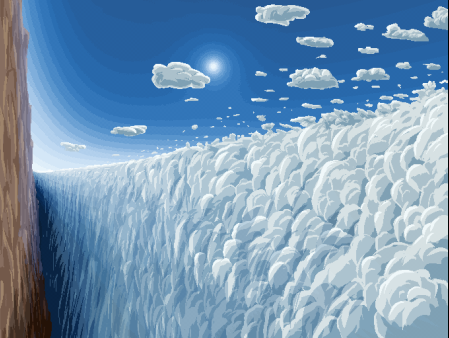 Everyone lives on a side of a giant wall, basically - the top is in a vacuum and thus is beyond reach. And I stuck with a conundrum, how do you determine longitude to navigate this thing (latitude is easy since you can track your elevation by atmospheric pressure or visually by the clouds surrounding the pillar)? I imagine compasses would be useless - the magnetosphere of the gas giant produces strong and chaotic magnetic fields, and even if it would be calm, the compass would always point towards the center of the cylinder, or up or down. So this leaves the navigation by stars as the only other option I know besides short-range navigation via landmarks, but how reliable would it be, considering that the planet is spinning?

Same way it was done on Earth: timekeeping.

Assuming the planet rotates, the tower, being at the pole, will rotate with the same angular velocity. Arbitrarily pick one place that will be the designated Prime Meridian. We'll call it Grenich. That will be 0 longitude. Now use a reliable clock set so that when the sun is at the highest point overhead at Grenich, it is the midpoint of the day, or start of the day, or however you arrange your timekeeping.

Have a portable second clock that keeps the same time, and travel spinward or anti-spinward from Grenich. If you want to know what longitude you are at, take a sighting on the sun when it's at the highest point in the sky (local noon) and compare it to what the time reads on your clock. The difference between noon where you are and noon in Grenich (which you know, because the clock is set based on it) can be used to determine calculate your latitude.

Note that this method works on Earth even in polar regions in 24 hour daylight because the sun still reaches the highest point in the sky at noon local time. In your setup, it's even easier because there will never be 24 hour sunlight except on the top of the cylinder.

Now, that suffices for low-tech. There are a couple of options for more high-tech solutions. One that comes to mind is that the civilization sets up radio transmitters at regular intervals around the cylinder, one high up, one low down, with paired transmitters at each interval. Let's say they set up 36, so one pair every 10 degrees, and each broadcasts a simple signal, say its longitude (from 0 to 350) plus N or S to indicate if it's in the north or south.

Your "compass" would consist of a radio direction finder that can measure the angle between two or more radio signals. You would first look for the signals the closest to directly north and south of you. Let's say it's the 30N and 30S signals. You then measure the angle between the transmitters. If they are 180 degrees apart, you are directly on 30 longitude. If they are closer than 180 degrees, basic trigonometry will tell you how far east or west of 30 degrees longitude you are. If you wanted to get fancy, it might lock on the 20N/20S or 40N/40S transmitters to make a second reading to verify.

If you can't get evenly space paired intervals, the system still works, the math is just slightly more advanced: you might be reading off the 33N signal and the 38S one, for instance.

Directions will be given in terms of up or down, clockwise or counterclockwise. "Steve, the rendezvous point is 3km up, 2km clockwise." Absolute positions will be given in altitudes and bearings; "Cloudtown is located at 15km, 287 degrees." What these measurements are relative to is mostly arbitrary, much like deciding the prime meridian here on Earth.

/There's ledges and gorges of various sizes, up to those allowing to build cities in. That's where everybody sticks./

These ledges and gorges are built things. They are part of the cylinder and they are symmetric. They are marked to be distinctive. They can be seen from a distance. Atop one, a person can see the neighboring ledges in the distance. Travelling between them one can see the two ledges you are between.

I could imagine coordinates corresponding to the relative apparent size of the two visible ledges. Right between them it would be A50B50 as the the viewer they are the same size. As i approach A the A value gets larger and the B value smaller. One could calculate this with a piece of paper held to the eye as one looked at the ledges.

Or perhaps an icon or figurine worn as a necklace and used for this purpose of determining relative size. I envision the protagonist uses a little animal made from a striped stone. When things are slow the protagonist and her companion debate over what the animal is supposed to be.

Not the answer you're looking for? Browse other questions tagged steampunk navigation .

10
In a World of islands floating in the air how would people navigate?
1
How close to Impossible can Navigation be on a Jungle Planet (for a Stone Age Civilization)?
10
How to navigate the hyperbolic world
8
How to navigate a ringed planet at night?
8
How could a steampunk zeppelin navigate space?
31
In a world without stars, how would travelers navigate at night?
27
Without modern electronics, how could you determine your longitude, latitude, and altitude while lost deep underground?
12
Figuring out the Cosmic Compass (Updated)
4
How would cats navigate oceans?
1
Navigation on a flat earth