What kind of building structures could a group of eleven people make whilst stranded on a tropical island?

I'm just curious to know what kind of structures a group of people would make on a tropical rainforest island.

After an incident in the beginning the story these eleven young people (young adults) are now stranded on a tropical island which is the size of Okinawa. The island itself is relatively untouched by humanity and one of the characters have noted that they have likely been transported back in time since otherwise this island would have at least been marked or visited.

They do know that they're somewhere in South East Asia and they eventually figure out that they are somewhere in the "ancient history" i.e. a full five thousand years back in time at least

As a result the eleven characters realize that they have no choice but to make a way to survive on this island for the rest of their lives. Nevertheless they are not just normal people. They are gifted people who are skilled in all manners of life and do have several construction tools that they were ship wrecked with.

Several of them have experience living outdoors and making tools, engineering or homes.

The climate of the island is slightly hotter than normal and can be wetter as well. It rains almost every other day at least on this rainforest. There are animals for them to hunt and kill here like birds, reptiles and fish along with nuts or fruit to eat. There's also a hot-spring as well.

On the other hand there are standard issues with rainforest diseases like jungle rot here and there is some sort of predators on the island with the largest they will face being leopards, crocodiles and surrounding marine life. Basically it's a micocosm of anything that can be substained on a small tropical south east asian island.

The island itself is somewhat isolated from neighboring islands with the idea being that it would be at least a hundred kilometers before they find another land mass. This is something the characters don't want to do for now.

As a result for at least a year on this tropical island they try to make the most of it.

Given this what kind of building structures could they make in such a scenario?

They have forest, tools, and skills. They can make pretty much anything that doesn't require metal. Pegs can sub for nails, in many ways, and if one or more have experience in Japanese/southeast Asian woodworking, the need will be very small in any case.

They might well start with huts resembling those from the Gilligan's Island TV series, as a first step from lean-to shelters -- but those will take only days to construct, and after that, the only limitation is how much of their time is required to hunt and gather for survival, vs. how much they're willing to invest in building and upgrading their living quarters.

How much time is that? I don't have a reference handy, but hunter-gatherers might spend less than twenty hours in a week, per person, on sustenance (water and food), once they have the tools for that (pots or bags for carrying water, cooking equipment, etc.) in hand. With 64 hours out of a 168 hour week reserved for sleep, that leaves as much as eighty-four hours per week per person -- or, for eleven people, 1124 person-hours per week. That's a BUNCH.

You'd be amazed at what 11 people who are healthy and motivated can accomplish in a year. Wikipedia points out that there are lots of tropical forests in this region, which means your survivors could build some swanky log cabins using basic hand tools. Without any nails or power tools, you could build multiple cabins like this. 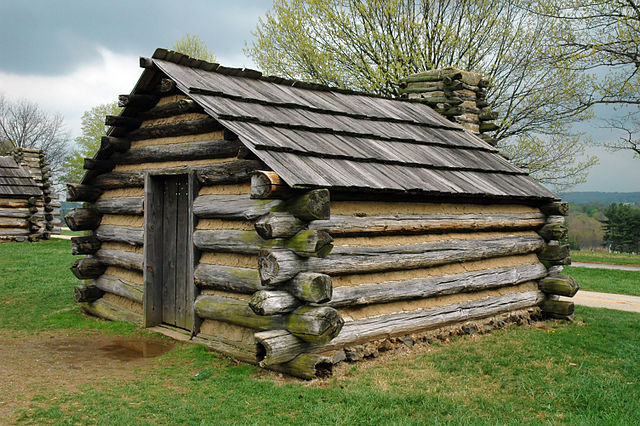 Here's a video showing the build process for a smaller group using modern tools. The cabin would protect you from rain and it would keep your survivors and their supplies safe from animals.

Not the answer you're looking for? Browse other questions tagged society time-travel survival construction shipbuilding .

7
How close is too close for a human habitation to be near an erupting volcano?
12
How to move on as a society without a common language
10
What tech is needed to make underground building cost effective?
12
How high can a city be built on a mound in a flood plain?
6
Building structures underwater: What could a giant crab do?
3
How to design and build a fortified compound in a 12-hour daylight period?
3
What would the survival rate be for a group of people forced into an underground, bunker style community?