Predict The Orbital Eccentricity Of A Planet In A Circumbinary Orbit

Okay, I have a planet smaller than Earth that has a mean orbital radius of .9 AU, and it orbits twin suns. The larger sun has a mass of 1.15 solar masses, and the smaller sun has an mass of .45 solar masses. They orbit in the exact same direction, and the distance between the two suns is about .0134 AU. All orbits are stable, and we will assume that the gravity from other heavenly bodies is negligible. How eccentric will the orbit of the planet be?

Given the information you've provided, there's no way to compute the eccentricity of the orbit; with this setup, it's a free parameter that you can set to whatever you want (although of course we need $e<1$ for a bound orbit). It would be possible to determine if we had some additional information, such as the energy of the planet $E$ and its angular momentum $\ell$, in which case the eccentricity would obey$^{\dagger}$ $$E=\frac{\gamma^2\mu}{2\ell^2}(e^2-1)$$ with $$\gamma\equiv GMm_p,\quad\mu\equiv\frac{Mm_p}{M+m_p}\approx m_p$$ and $M$ the combined mass of the stars and $m_p$ the mass of the planet. Alternatively, you could take a physical approach and specify the pericentric distance $r_p=a(1-e)$ or apocentric distance $r_a=a(1+e)$; either on its own would be enough to determine $e$.

That said, a circumbinary planet's eccentricity doesn't follow a uniform distribution. As you might expect, for a given semimajor axis, lower eccentricity orbits will survive for longer amounts of time, as lower eccentricities mean larger pericentric distances and therefore further closest approaches to the central stars. When the pericenter becomes comparable to the separation of the binary $s$, things get quite dicey, so ideally you want larger $r_p$ and therefore smaller $e$.

Some numerical studies have been done in this area; see for example Sutherland & Fabrycky 2016, which has an excellent title. They considered a binary star of masses $1M_{\odot}$ and $0.1M_{\odot}$ with a separation of 1 AU, and placed planets at varying distances from the binary's barycenter (semimajor axes between 1 AU and 4 AU, and eccentricities between 0 and 0.3). Not surprisingly, for a given $a$, the higher-eccentricity planets were ejected much quicker. Here's their Figure 2: 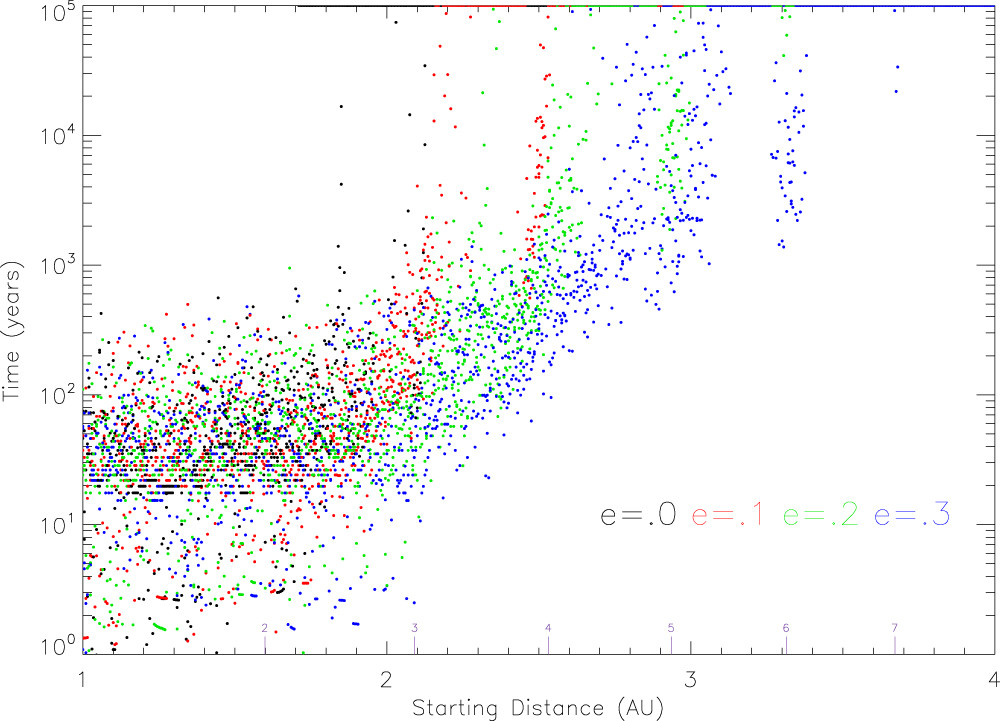 The short answer, therefore, is that the vast majority of orbits will be just fine, but extremely high eccentricities will not be.

$^{\dagger}$This is taken from Classical Mechanics by John Taylor, which was the handiest reference I happened to have lying around with an example.

Not the answer you're looking for? Browse other questions tagged planets gravity orbital-mechanics solar-system astrophysics .

10
How would this tidally locked planet be affected by its moon and would the moon have a deaccelerated orbit?
2
Could a habitable tidally locked planet have a day and night cycle caused by the eccentricity of its orbit?
5
Long Term Evolution of Double Planet System in Close Orbit
1
Perpetual Day Planet
1
Sigelon's Terrible Neighborhood
6
What are good lower and upper bounds on year length for habitable planets?
3
Length of seasons on a planet with eliptical orbit