Assuming ancient levels of technology, perhaps 2500-1500 BC, how would one be able to make a underground city like that of Kaymaklı, while having it be able to be breathed in and, is possible, have a basic water system? I am aware that at least the breathing is possible, but not fully aware how it is so.

Also, how are these kept from collapsing when mining larger chambers? Larger Chambers as in around 4.6m x 5.5m to a little above. This spreads into various different groups of rooms branching off one another, and various tunnels as well. This would be separated into general storeys, perhaps around 15-20, going upwards and downwards in the mountains, total that is, not 15-20 in both directions.

In a real-world analogue, one could compare it to just being built into mountains. Mostly the lower ends of them, and not near the peaks. Sort of like the Andes in terms of the vast rainforests on one side, and very dry deserts on the other, very typical for mountains, I know, but this is just the kind of mountains I thought of when conceptualizing the city.

Would be preferable if sources of how this was done are cited, and if possible, linked to. Thank you.

You need some kind of intrinsically favorable geology to form a large cave city. In the case of Turkey, There was a large sheet of hard, durable stone over the top of a very soft malleable stone. This meant the structures had a very hard roof of stone that held together well as a unit, while simultaneously having an extremely soft layer of rock in which to dig. But even softer rock carved in a solid piece is very cohesive and unlikely to collapse in the way a typical roof composed of blocks might.

As for technology, they pretty much used trial and error. If the air was bad in an area, they dug a shaft from the side or above (if needed) to give ventilation. If you wanted a really big chamber, the upper hard stone could work like a large single slab. Vent/smoke holes could be quite small, certainly not passible by an attacker. Much of these cities was not actually all that far from a surface of some kind, so distances to dig ventilation were not that bad. Where it got deep, long air shafts that would be difficult for attackers to ascends and descend were constructed straight up and down.

Other kinds of natural structures are possible where large caverns have formed underground (such as magma chambers) that would likely provide a large internal space in which to build a city. Many volcanic rocks are extremely hard and can provide a lot of strength to support large roofs. If you look at the lava caves in Iceland, for example, there are some extremely large chambers and cave systems that would provide space for numerous inhabitants. A large vacated magma chamber could provide enough room for a sizeable city to be built within. Ventilation in this case might be provided by a hole in the ceiling or a large cave entrance. Lava caves allow at least the possibility of geothermal heating and water, a possible reason people would want to build a city inside what would amount to an extinct volcano.

I'm sure other folk here could come up with additional geological sites with favorable conditions to allow different kinds of underground cities. 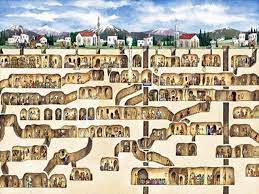 Another option might be a large natural cavern or series of smaller interconnected caverns.

Depending on the size of the space available man made structures could be built in the larger sized spaces and if tunnels and rooms are dug out at angles from a cavern to increase the amount of space available waste stone from the tunneling process could be used to construct buttresses to help support the ceiling at key points.

Not the answer you're looking for? Browse other questions tagged cities architecture ancient-history underground .