Piggybacking off this question:

Shallow sea world - plausable geology? what would we need to have a world covered in reef? An entire world of this: 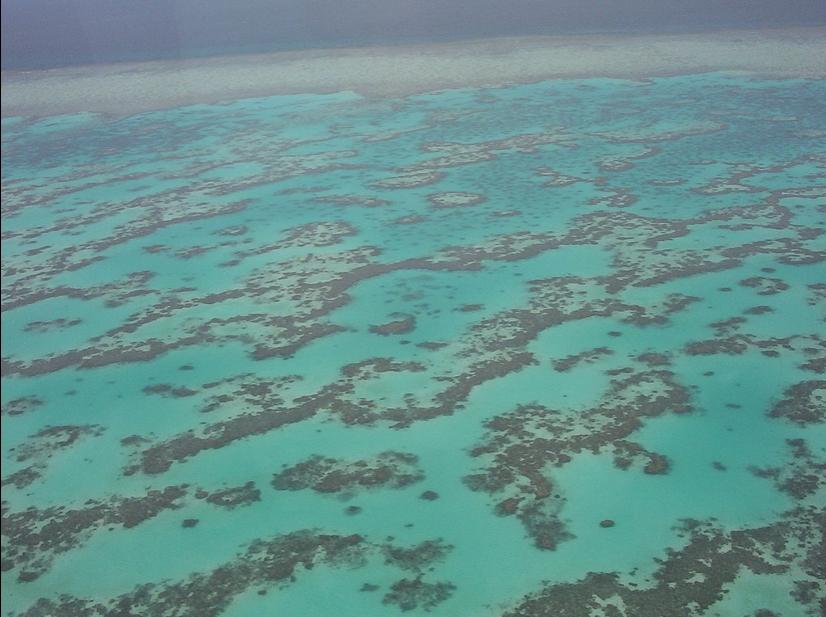 If I understood them correctly the previous questions answers suggest that the planet would need deep oceans as well, so its not all shallow. And that it might need volcanic activity to shed heat. So how about mostly shallow and some volcanic venting?

It is an old, old world. The core has frozen and plate tectonics have stopped, although fortunately for this world's atmosphere the nickel-iron core has become a large ferromagnet which continues to protect from the solar wind.

Weather continues. Over the eons, rain washes the mountains down into the sea until there is nothing left to erode. Under the surface, mass action causes high points to fill in low points.

Now several billion years later the work of the plates has been undone. There is no more land. Rain falls on the surface of the water and underwater the ocean floor is shallow at all points.

Coral reefs can only exist in warm, shallow seas. High gravity will work to even out the terrain, and you want oceans that are on average no deeper than 200 m. A large planet will be more volcanically active, as well as having higher gravity, so it’ll work out. As for getting energy from its sun, the corals can survive water temperatures between 291 and 313 K, so we want that as our temperature range. Water is a greenhouse gas and has a low albedo, so it should work to keep the planet warm. Get a good axial tilt, and an decently-long day, and it should work for a predominant coral reef biome.

This isn't a guarantee of a world with NO deep parts lacking reefs, or NO islands, but it may help to explain a lot of the gaps in your worldbuilding. A couple of these might be mutually exclusive, so pick and choose as desired.

You need some source for minerals for nutrients for those reefs.

If there is no exposed landmass to erode, this becomes a bit of a bother.

As for having vast reefs but no coral islands: no problem. Your coral-equivalent grows at any depth from several hundred meters down, up to but not reaching the surface. Something as simple as the local star shining with severe UtraViolet light, that sterilizes the surface but is absorbed and neutralized by a few meters of water. This will allow the coral to grow towards the surface, but stop it from reaching the surface.
Add that to a world that has smaller tides, so there is no great sloshing of the waters to expose the coral, or to wash coral sand into piles that become islands.

As for not having real landmasses, with mountains etc.. You just need to not have active plate tectonics. Your planet is Old, the crust is many hundreds of km thick, and locked in place. Anything that pokes out of the water is already eroded down.

As for the nutrient source...hmm. Maybe your thick crust is being invaded by the ocean, causing multiple persistent but non violent geothermal vents all over the place?

Or.. a bit radical but picturesque: You planet HAD a medium sized moon, in a very low orbit.
The ridiculous tides from this is what scoured the landmasses down to sealevel, and also filled in most of the ocean deeps.
Now, this moon has passed below the Roche limit of your planet, and has broken up into a very dense ring system. Very pretty rings, their even mass distribution has completely stopped the tides allowing your reefs to form, and the continual drizzle of dust falling from the rings seeds the oceans with ample nutrients.

You just need two things: very little continental crust and slightly less water, both of these can basically be handwaved. Both are the results of minor fluctuations in the starting makeup of the planet. You can just say both are true and no one can really say anything. You will have a few small continents, some volcanic island arcs and some trenches, but most of the world will be a mix of ocean of varying height, much of which will be shallow enough for coral.

You can make it easier by having a larger variety of coral like organisms, perhaps ones that make skeletons of silica and/or iron oxide. This is an alien world coral which does not need to function exactly like earth coral. It could be more photosynthetically efficient or have more filter feeding varieties. This can drastically widen the depths suitable for "coral".

If you can blue shift the star a little or move the planet a little closer to it, it will help with light penetration.

Just like on earth, coral islands may get exposed due to geologic changes, but exposed coral will die so you will not get noticeable amounts of dry land that way. Much more coral will be pulled down into deeper water leaving dead or dying reefs in deep water. Expect an entire ecosystem build around this.

Expect such a world to have between 1/3rd to 1/2 of its surface area to be suitable for coral.

The deep sea has pretty much no light reaching it. Deep sea corals do exist, but a big reef in the deep sea has not been discovered. According to Wikipedia and the source listed on Wikipedia, the biggest deep sea reef is only around 35 km long and 3 km wide. All the articles I looked at said that the reef was different sizes, but both the .no websites (the top domain for Norway) said it was 35 km long. That reef is only a couple hundred meters down. That is above the midnight and abyssal zones, where no light reaches. I would say it is very unlikely that a reef covering the entire planet could form, unless Earth is a very weird planet, and future discoveries prove us wrong. A large shallow ocean, covering most of the planet MAY exist, but a large deep sea reef wouldn't be viable, even with volcanic heating. Also, a rogue planet would not work, as a majority of corals need warm water, which, on a planetary scale, will need a nearby star to warm the surface.

You may need to translate this

Not the answer you're looking for? Browse other questions tagged planets geography geology ocean .

10
Can an ocean and beach only planet exist with an O2 breathable atmosphere?
16
Shallow sea world - plausable geology?
10
Placing a planet on the famous Escape Velocity Graph
4
Massive volcano on reef world?
3
Reef World 3 - Wandering Islands on the oceans of Reef World
2
World with only shallow waters?
1
How to Cause a Hydrosphere Apocalypse III: Erosion and a Shallow Sea

4
Animal life on a planet orbiting a red dwarf
6
Geography and Appearance of an nitrogen/ammonia planet
22
Is this coral lagoon geologically possible?
7
Would storms on an ocean world harm the marine life?
2
Implications of ocean basins filled with coral sand
6
What is the crust of a habitable planet with Io-like heat-pipe tectonics made of?
2
Valles - a world of deep canyons, could it work?
6
Reef World 4 - Flora
3
Can an Earth-like world of shallow, global, seas be stable over geological time?
2
How would geothermal heating affect ocean currents on a rogue planet?