How much mass do we need to send to the Moon to set up a useful factory there?

In light of SpaceX's recently winning the contract to go to the moon for NASA, I started thinking (again) about what avenues sending a rocket that size might open in our near-future. So for a short story I'm writing, I'm building a first base on the moon. 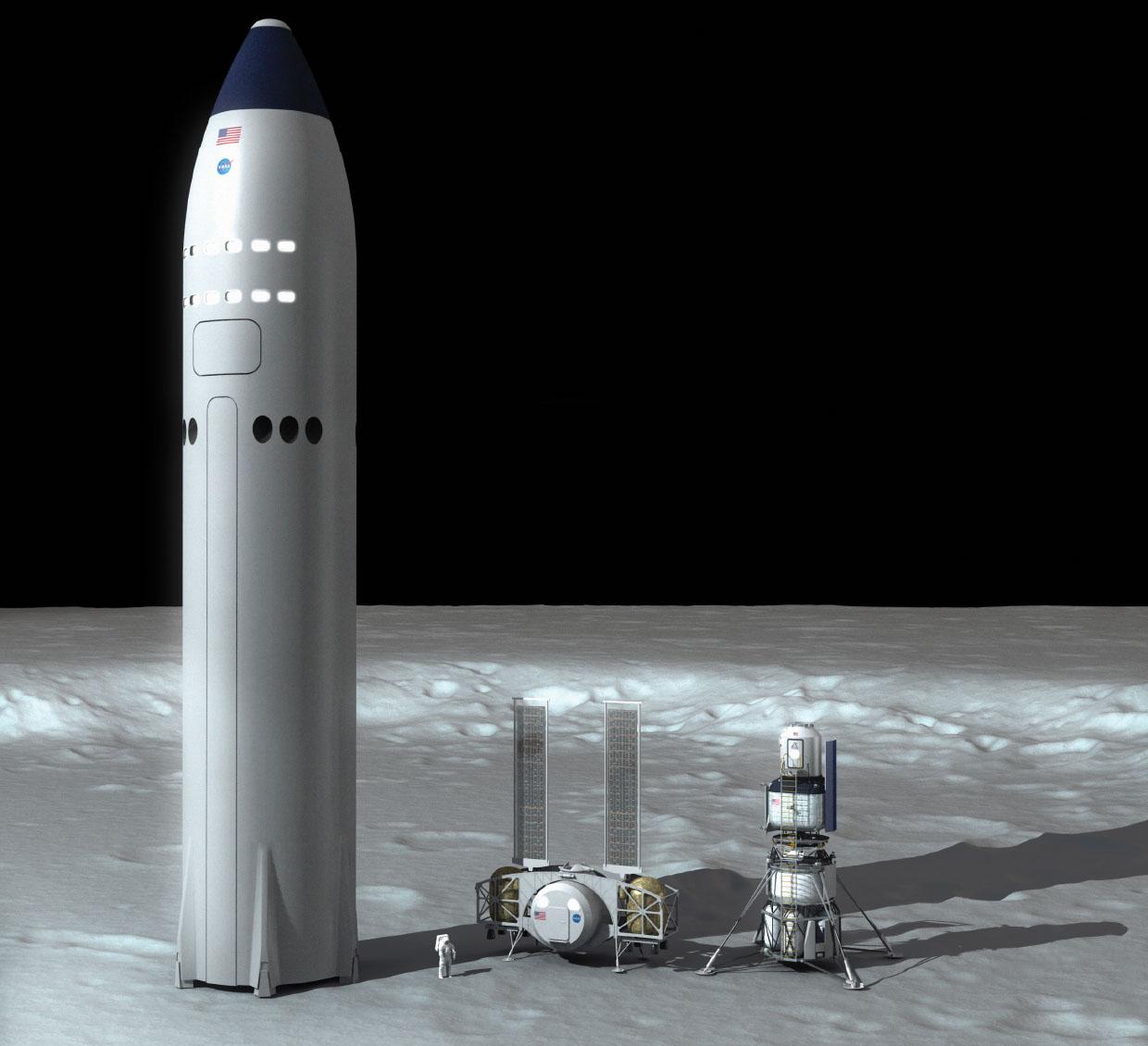 SpaceX's vehicle (do I need to say this) is the one on the left. Yes, that thing is big, ten story building big, and with (multiple rounds of) in-space refueling, and expendable launchers (use them to build your first habs on the moon), we can send about 100 tons to the moon each time. SpaceX is making sounds (through their CEO) that suggest a build/launch marginal cost (i.e. ignoring initial R&D) of about USD \$5-10M. It's still not "dirt-cheap", mind you but at that cost, NASA, SpaceX or whomever hires them to do so can afford to send a lot of mass. (For scale relative to the enormous US economy, US defense budget in 2021 was USD \$733 billion, so a fleet of 100 starships at the price mentioned above would be less than 0.2% of that).

Now, to set up my first smelter/factory, how much mass would I need? Let's put a very low bar in place and say it needs to be able to process 1 ton of material per day. For comparison, a rather primitive ore smelter with late 1800's technology could process 20,000 tons per day. But you know, we're in space. Stuff is a bit hardercitation needed there. So we'll make allowances by reducing production several thousand-fold. Still if you think about it, even being able to produce 1 ton of stuff, say aluminum rods or iron bars, per day, would dramatically reduce habitat construction costs on the moon, since each ton you produce locally is a ton you don't have to schlep around expensively from Earth, and especially for bulk materials, that seems to make a lot of sense to get going as soon as humanly feasible.

So, how small can this kind of setup be, in terms of mass?

Let's look at what is needed for smelting any amount of ore. First off what are you smelting? Different items melt at different temperatures (IE Iron is 1500C, while aluminum is approx 650c - https://www.metalsupermarkets.com/melting-points-of-metals/). You need a container to smelt the items in which can withstand the melting temperature required. For many of the materials required you can actually hollow out a bowl in the regolith and use that for melting provided a viable heat source and a means to bleed off the metals. It melts between 1350 and 1600 Kelvin, which is approx 1000-1300 Celsius.

As to a heat source there are many varieties of molten salt reactors which are relatively lightweight and can product the requisite heat (http://fhr.nuc.berkeley.edu/wp-content/uploads/2014/09/AHTR.Nuclear.Technology.Article.May20.2003.pdf) provided you can bleed off the excess heat.

Next you need the requisite mining equipment. A large excavator weighs approx 50 metric tons (https://www.gregorypoole.com/new-equipment/machines/excavators/352f-l-hydraulic-excavator/) and the requisite batteries would weight another 2-3 metric tons. One should suffice to start with. Along with the digging you would need a hauler. As it must be an offroad vehicle, a 42 metric ton ton weighs approx 8 tons (https://www.gregorypoole.com/new-equipment/machines/off-highway-trucks/770g-off-highway-truck/). Again you are looking at another 2-3 tons for batteries.

Next you need charging infrastructure. This would require a means of converting reactor heat to electricity. Seeing as how steam is not an effective medium in a 0 pressure environment you are likely looking at thermovoltaics. The many, if not all, US space missions used this method for power in their launch vehicles (https://en.wikipedia.org/wiki/Radioisotope_thermoelectric_generator). This is a lightweight solution (Potonium gives approx 140W/g) to recharging batteries along with providing power as required to workers on site.

Finally there is habitation for workers. Bigelor Aerospace has their B330 Lunar module in planning right now with a launch weight of 23 tons and provides 113 square meters of space, 330 cubic meters total volume. 2 or 3 of these would provide ample accommodation for workers.

So for total weights we have

I think that is all you would need if you can make regolith work - ceramics might work to contain heat within the regolith to avoid melting from excess heat - add another 10-20t for that.

To sum, then, we are looking at approx 302 metric tons. Assuming a lift payload of 16.8t (Falcon heavy to trans mars injection payload to allow for lunar landing and return) we are estimating approximately 18 lifts. If we call it 20 lifts for flexibility you are looking at 100M to 200M USD to begin the process.

For further consideration you will also want to look at which materials will be required on your base as it's being built to protect against radiation and also to prevent air leakage as many of the smelted materials will be somewhat porous in nature. You will likely need some form of plastic or ceramic lining which can be sprayed on the interior, as well as numerous airlocks in case of a breach (asteroids will be far more common than on earth). It may be wiser to use your mining equipment to hollow out tunnels several hundred feet below ground for a protective layer and line them with melted regolith. But that is just my thoughts on the matter :)

Good luck on this.

Only a few kilograms!

The concept of convergent assembly (http://www.zyvex.com/nanotech/convergent.html) has been around for decades but has long been considered a solution in search of a problem. In my opinion space colonization will be its killer app.

In short, our modern notion of what a factory is and looks like is a relic of the scale of pre-20th century technology. Also in earthly industries where time is money there's an understandable impulse to minimize the manufacturing times of desired goods by essentially trading off energy and mass for time. When it comes to space colonization though this equation is reversed. Energy and mass become very precious while time is for all practical purposes unlimited.

Conceptually it is achievable with modern technology. It would just require lots of something that humans hate to conceed: time.

Not the answer you're looking for? Browse other questions tagged science-based moons space-colonization manufacturing or ask your own question.

39
Do we actually have the technology for a permanent Moon outpost?

11
What does my moon colony need?
47
Is this alternate history plausible? (Hard Sci-Fi, Realistic History)
1
The Moon needs water--but how?
6
How would the US re-conquer a Moon Base?
2
Only changing the mass of the moon, how much can lunar mass increase before the Earth becomes uninhabitable?
9
How long will it take for the off-World population to exceed Earth's population?
3
How fast could we build a Dyson Swarm?