Ask Question
Asked 3 months ago
Active 1 month ago
Viewed 318 times
3
$\begingroup$
Closed. This question is opinion-based. It is not currently accepting answers.

Torchblow. What are they and why do they need a predator? This link should give you a good idea.

Basically, it's a four-legged monster, the size of a typical pig with a 1/2-inch thick shell (a shell that's seven times tougher than tooth enamel) that can run at 30 mph indefinitely (for as long as it can keep itself angry and/or excited) and breathes fire, specifically a stream of fiery gel (which is essentially coalesced flame, sticky as marshmallow and tough as rubber). Note: Unlike a regular Quad, which has the round end of the egg as its head and the point of the egg as it's "tail," Torchblow have it in reverse; the point is the head and the round end is the back.

Torchblow Attacks-Firebreath, Firebomb, and Radiance It can shoot this gel distances of up to twelve feet, and this gel is so hot it can essentially disintegrate a human tooth on contact, or in other words, it can confer enough heat (15 minute's worth of 1100 Celsius flame, according to the table in this article) on contact to destroy a human tooth. If you're wondering how much a Torchblow can spew, think garden hose.

If one gets a Torchblow really angry, or if they just feel like it, they can close their jaws tight and build up their firepower, and in five minutes their jaws will fly apart, releasing a 2x2 foot orb of fiery gel that explodes on impact, covering a 4x4 kilometer sphere (with a resulting crater where the bottom half of the sphere would be). This 'firebomb' projectile, when released, has range and speed equivalent to a medieval longbow, but it takes a Torchblow an hour to recover from that attack, and until then, they can only spew half a liter's worth of gel every two minutes, and then they can only hit something a foot away from their face, MAX.

Additionally, a Torchblow radiates as much heat as a bonfire and they glow a faint red-orange (like a fading ember) but can bring this glow to a searing, blinding intensity (enough to leave all enemies within fourteen feet lobster red and blind them for at least an hour) within three seconds. This 'radiance' attack requires two hour's recovery time before it can be used again.

Of course, Torchblow can also peck and bite; their four-section beak (actually two pairs of mandibles that fit into a cone when pressed together) allows them to peck and even lance prey, and their mandibles not only allow them to hook and clamp prey but to grab it and force it into their fiery maw. (Said mandibles are strong enough to hold and overpower a teenage girl, so do not underestimate them!) As a final 'attack', Torchblow can exert a powerful vacuum (powerful enough to pluck a Plop right from terra firma and into the fire inside it), which covers two square feet in front of them.

The gel-like nature of a Torchblow's flame comes from one of their three main prey items, namely Plop. Young Torchblows develop their fiery gel either by just sucking them into their fiery interiors (those are the smart ones) or by setting them on fire and then sucking them up (those are the dumb ones). This Rubberizes their flame, giving it a Plop's rubbery but sticky amorphous nature.

Young Torchblows also prey on Leafmaw (a larva-like creature, amorphous and resembling a pile of leaves, which eats mostly dumb children who try to jump into it), because they hold the Mimicry enchantment. This, as you will see, is very intelligent, but it is all instinct for them.

Additionally, in order to reduce their caloric constraints (so everything they eat isn't going into maintaining their flame), Torchblow suck up (or try to burn up, in the case of the dumb ones) Wild Anklebiters, giving their fire a 'life of its own,' so to speak, so it can fuel itself. However, flame with a life of its own also has a MIND of its own, or it would if not for the Mimicry enchantment.

"What's the third prey item, though?" The answer is whatever they want! Torchblow have pig-level intelligence, a hair-trigger temper, and a distinct taste for pyromania, with a sadistic preference for living prey, specifically prey that can move and give cries of distress and a taste for arson.

Worst of all, Torchblow have the Pyris enchantment, which tends to have all kinds of nasty results on prey. It turns soft (non-rigid) organic items, like flesh, cartilage, or fur, to ash but does not destroy (or boil up) organic liquids, oils, or solids.

Torchblows are weakened by water and oxygen deprivation, as covered in this question (look for the paragraph starting with 'however' for more on those weaknesses). Their shell can also be smashed with enough force, though I must admit I am uncertain as to whether a sledgehammer would do the job. (Pretty sure a stone brick dropped on them would though!) Their four-tube legs and eyes are also weaknesses; cut the legs, which are like rubber cement and you'll immobilize them, and if you stab them through the eyes, they're dead. (Said eyes are the size of a tennis ball squeezed into an oval shape.)

Finally, while Torchblow live in groups of up to 15 individuals, they are relatively rare, with only 5 million living individuals, and their method of reproduction makes them relatively vulnerable; like Chompers, they form buds shaped like half of an egg (with a maximum of four buds finished each month) but Torchblow buds come off when finished and drift off into the air, glowing like dull embers.

They form four of these buds each month, and while these buds are drawn to 'opposing' Torchblow buds (those complementing them, ie. those shaped like the other half of the egg they represent), these buds are often weakened or extinguished by clouds (the bud's shell has to be cracked before water can get in and kill a floating bud, so most are only weakened) or eaten by Droppers, which are of course effectively immune to Pyris, being clad in a solid shell with gelatinous insides, but which are routinely shot down and eaten by Torchblow (since they know Droppers eat their buds).

So, with all that out of the way, my question is What Would Serve As The Best Torchblow Predator?

The trouble is, while Enchanted monsters and creatures exist all over the place (Willful cats, Stubborn goats) I'm not sure what creature (or creatures) would serve as (or develop into) a predator capable of preying on Torchblows (or else keeping them in check). If you're wondering what animals you have to work with, my setting is based on (and therefore mirrors) medieval Europe.

Thank you, I really need to figure this out so I don't have entire ecosystems destroyed by these things.

The Torchmaw is stupid-powerful enough to easily destroy a medieval town or forest with impunity. Only high level monsters or adventurers can fight against it.

Here's the catch. The Torchmaw is powerful because its body contains a large amount of Chaos Energy. The same energy that allows things to level up. It's not interested in eating mundane plants and animals, since they don't provide the Chaos Energy it needs to survive. Instead it preys upon other high level monsters and adventurers.

It only attacks a town if it detects a high level person in that town. That means any people with high potential are a liability, and must train themselves to repel such attacks.

The most effective attacks are ambush attacks. For example a high level Jaguar can sneak up and crush the creature's brain quickly. That means (a) there is no need to deal with long range fire attacks and (b) the Torchmaw dies before it gets the chance to heats its body to intolerable levels.

You need to make something so terrible that it could gobble these things for breakfast, lunch, and dinner but not so strong that you need another question.

So there is the fire triangle. Fuel, Oxygen, Heat. And well look at that Oxygen is there and it's in your list of weaknesses. One way to stop oxygen from getting to a fire is a fire blanket. A living fire blackent that hides on the floor of places, when it sences a pyrus enchament (the type of your fire mandible pig) it springs to entrap it's prey. Like a venus flytrap but a carpet. Maybe since this thing has the pyrus effect then maybe put some water enchament just in case it's gonna burn too, but I don't know it is taking away oxygen. This magic carpet is eaisly weak. Just stab it and it's dead. People could even use it on their floors.

Another way to take away oxygen is a fire extinguiser. It does this bye replacing the ocygen around the fire with CO2. So, maybe something that holds it breath for a very long time and then it shoots out its pressurized brath.

Or simply just get a European golden eagle with the intellegence of a parrot, they can get bricks laying about fly them high enoguh then drop them above your tourchblows. Then it can wait for the things enchantment to finish (if the enchantment ends when the creature is dead). Actually, the golden eagle is the preditor of some pigs, so it fits well w/ your Pig, but madible,s and light it on fire. I think this is an okay answer. 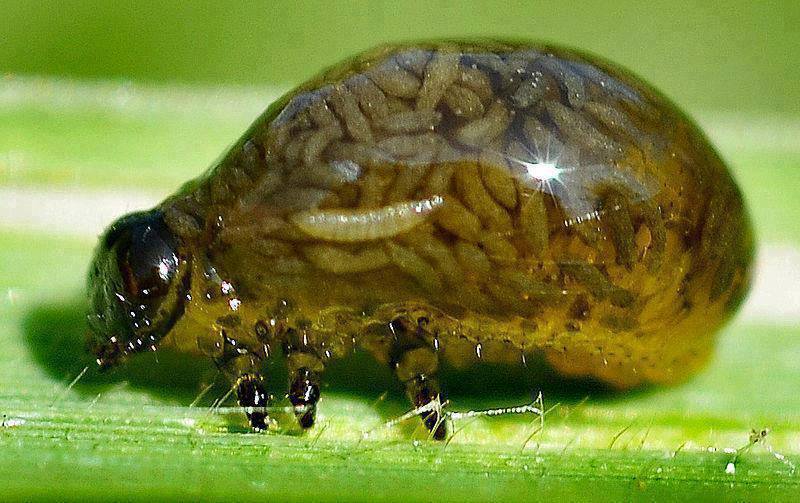 This beetle did not know it was being visited by a parasitic wasp. The wasp is tiny, with a featherlight touch as it lays its egg. Maybe the egg hatches into a tiny grub which makes its way into a crack. Maybe the egg is inserted through a weak spot in the beetle's armor.

The end result - the beetle is slowly devoured from the inside out by wasp larvae. It does not happen immediately. The beetle continues to do its beetle things for as long as it can.

So too the torchblow. The wasp is not bothersome when it visits and it only visits once. The torchblow goes about its overpowered business, and maybe becomes a little less overpowered than in recent days. Maybe stopping to rest a bit more. Slower to get angry, slower to explode into flame. The other torchblows in its family group do not wonder; they are all slowing down also because they have also all been visited by the wasp.

Replete with torchblow meat, the grubs wiggle their way out and drop onto the ground where they pupate. Or perhaps they take advantage of their formidable host and pupate within the body, emerging from chinks and cracks in the carapace to buzz away as new wasps.

New wasps do not return to the torchblow where they were born, even though it may still be durably staggering along. One of the grubs within will someday be the end of it and then the Pyris enchantment will be the end of all remaining grubs. Best to find greener pastures elsewhere.

Not the answer you're looking for? Browse other questions tagged biology mythical-creatures medieval-europe low-fantasy or ask your own question.