How can I change Earth to become like Mars?

Earth has its own current population, 7 billions individuals or so. Everything is going great: there are animals, rivers, houses and factories. The world as we know it (without pandemic!).

One day people wake up only to find out that something is wrong with Earth. Something related to the physics of the planet. Something that is making it roll down a hill and become more and more similar to Mars. With this I mean that, with a slow decline:

To summarize, in a couple of years (or 20 years? or 200 years?) Earth is destined to become deserted and lifeless as Mars.

Now the problem. I know where to start (Earth as it is now), I know where to end (Earth becoming lifeless as Mars), I don't know the tool to be used to make this transition.

What could be possible explanations to make the Earth do this shift to a lifeless status? Physics-related answers are preferred, but also not scientific (but credible) answers are ok.

If Earth would lose its magnetic field, solar wind would have nothing stopping its interaction with the atmosphere.

This would result in molecules being split up there. If this happens to water molecules, they will be split into oxygen and hydrogen. While oxygen is massive enough to generally not escape the gravity well, hydrogen will leave to space. Over some millions of years water would simply be lost via this mechanism, and Earth would become a desert, with no life due to the lack of water.

Then over few more millions of years the atmosphere might be lost anyway, because a small fraction of the gases have velocities high enough to escape the gravity well, and if those are not replenished by volcanic activity they result in a net loss.

But mind it won't happen in the timespan you have in mind.

An alternative option is to wait for the Sun to go through its final life stage, where it will become so hot to blow away the planet atmosphere and oceans before swallowing it. But also this will not happen soon.

It is possible there is is a huge amount of water deep in the mantle, perhaps three times as big as the oceans. It is not a big stretch to imagine there is place in the silicates for an additional 30% capcity. Let's say something (caldera explosion somewhere under oceanic floor?) makes the water seep down and bind with the silicates. The loss of life, atmosphere etc. follows naturally (though maybe not in the timespan given).

Rearrange the galaxy a bit.

If you drag the star system Eta Carinae (a binary or possibly trinary system, we're not sure) to within say 30 light years of Sol (it's currently at about 7,500 light years), then when it goes supernova (it's expected to anytime now) then it'll strip the atmosphere and most of the water quite effectively, but without knocking the Earth out of orbit.

Alternatively have a Rogue star wander into our "local system (again, local would be within 30 light years or so) and then go supernova for the same effect.

There are some current issues currently recognized today as having significance to the planet's climate. (I am avoiding getting into any political discussions here about climate change, so i will keep my language as neutral and non-political as possible.)

You could make up a global warming theory, based partially on current discussions and partially using literary license, to create a plausible scenario.

For instance- there is discussion about the relationship of polar ice and the global temperature. Ice reflects solar heat into outer space; conversely, water is darker and absorbs more heat. More heat would cause more ice to melt, which increases the heat absorbtion etc. In theory this could be a runaway cycle.

What if all the polar ice would melt at one time? Say a massive volcano would erupt right at the north pole, spewing tons of molten lava all over the ice cap. This would melt lots of ice and raise the temperature right away (from the heat of the lava), as well as causing more solar energy to be absorbed in the future. You could substitute a meteor crashing into the North Pole as well, or any other sudden traumatic incident which would destroy the polar ice cap.

Now this by itself isn't enough. All this would do is raise the temperature of the planet, cause more water to enter the atmosphere and at best create a humid greenhouse. It might devastate planet earth, but it wouldn't turn it into a desert because the moisture would stay trapped in the atmosphere. So eventually it would rain back down again. And, as the planet's climate works in cycles, it probably would eventually completely recover its ice covering as well within a few thousand years.

You need a mechanism to turn the atmosphere dry.

Here again, we have a contemporary issues which could be borrowed and adapted for your purposes: the Ozone Hole.

The ozone layer is made up of a type of oxygen molecule, found naturally in the atmosphere. It absorbs lots of radiation from outer space. As the ozone layer gets depleted, it allows more radiation to reach earth.

This helps your story in a couple of ways. First off, the extra radiation will help speed up the warming and prevent the ice from reforming.

Second, the hole could be used to explain how Earth could lose the moisture. You could have a form of radiation which could react with water and break it into hydrogen and oxygen, with the hydrogen then leaving into outer space.

Or, with some more literary license, you could just make the atmosphere leave via the hole. The heat and added moisture creates such pressure that it presses the moisture-laden air out into outerspace.

Either way, this gives you a situation where the Earth is heating up and the ocean water is evaporated, but ends up escaping into outerspace instead of raining back down to Earth. You could thus conceivably make a time frame of a couple hundred years for Earth to look similar to Mars. (It wouldn't be anywhere near identical to Mars yet, but it would start to be comparable and would already have devastated life on Earth.)

To keep the ozone hole from healing itself, you would want to include a natural volume of certain chemicals like chlorine, bromine, nitric oxide etc. As radicals, they interact with the ozone layer and keep breaking apart the oxygen moecules, thus furthering destabling it. So for example, maybe mankind discovers that as the polar ice melts, a natural deposit of bromine is uncovered. This bromine reacts with the ultraviolet light (which hits earth stronger because of the ozone hole) and release bromine radicals, which then continue to enlarge the ozone hole.

Again, this is not strictly scientifically accurate, but it could work as a pseudo-scientific explanation and could be plausible to the reader.

NASA has a nice article about why Mars' Atmosphere was stripped away.

NASA's MAVEN Reveals Most of Mars' Atmosphere Was Lost to Space

I favor bleeding energy from the planets rotating metal core in order to fuel energy needs...implying life that could construct such a thing(intelligence, as is commonly defined, is not actually needed...why not a bacteria that fed on the planets magnetic field; bleeding off massive amounts of energy?).

This could reduce the planetary dynamo the creates the protective magnetic field and allow the solar wind to strip the atmosphere.

Interesting news! Astronomers notice a relativistic jet from the supermassive Black Hole at the center of the Andromeda galaxy. The jet accelerates massive amounts of matter to relativistic speeds (80% of the speed of light). 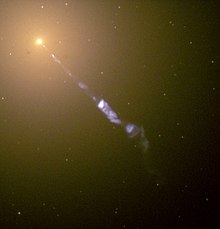 Bad News! The jet is getting brighter and it looks like our Solar System is going to pass through the jet!

Worse News! The jet pushes a heck of a lot more particle mass than the Earth's magnetosphere can absorb. As the Earth's atmosphere is stripped, the lower pressure causes evaporation of the oceans, which is also stripped as it is converted to a gas state! The Jet only hits the Northern Hemisphere (since we can only see the Andromeda galaxy from here), so it takes longer for life in the Southern Hemisphere to die. We pass through the jet in 20-200 years, but by that time it's too late, we have a climate like Mars!

A simple large meteor hit at an appropriately oblique angle would cause acceleration of the earth spin. This acceleration would cause centripetal force to bleed off the atmosphere as slowly (or as quickly) as you like. It could also work to "reduce" gravity. As the atmosphere bleeds off the lower air pressure would cause the oceans to boil away, providing every effect you could want in a simple plausible manner. It adds believability in that people have lately become paranoid about meteor strikes and have started tracking everything that moves in the solar system.

Again, for simplicity, a collision in the asteroid belt could provide the impetus for the rock to hit our planet at the correct angle to impart appropriate rotational energy.

Not the answer you're looking for? Browse other questions tagged earth mars life or ask your own question.

5
Can Earth become a micro Death Star?
7
Shielding Mars from the Solar Wind
16
What impact is required for a visible (from Earth) ejecta plume on Earth's Moon, and would the Moon survive?
16
Humanity’s first effort at moving a planet
31
Can you design your own plants without a computer?
7
How long would an abandoned surface colony on Mars physically last?