Finding an ideal UV-transparent refrigerant, or how to miniaturize a Fulminium reactor

In my setting, I have Fulminium crystal reactors. Fulminium decays emitting an electrical current spontaneously, but at a greater rate when stimulated by UV light, and it also emits UV and orange light plus heat as a byproduct. Fulminium reactors are therefore self-stimulating, requiring shutters to reduce UV cross-talk between the crystals as a means of controlling their output.

However, 'traditional' Fulminium reactors are air-cooled, which makes the reactors quite bulky. Failure to cool the reactors usually results in them self-destructing.

I'm looking for a liquid coolant that can be pumped around the Fulminium crystals that won't absorb the UV necessary for the operation of the reactor.

Unfortunately water won't do... it absorbs a significant amount of UV radiation, and using it as a coolant would effectively poison the reactor, making it useless.

What liquid with a reasonably high specific heat and relatively low reactivity and toxicity, that does not absorb significantly in the UV part of the EM spectrum would make the best coolant? Having a high boiling/decay temperature (>100°C) and a low freezing point (<0°C) would be an advantage.

While Fulminium is 'magical', I'm looking for a real-world substance to use as a coolant.

I'm also willing to consider alternative reactor designs that don't necessarily require an UV-transparent coolant. To that end, this is how Fulminium works:

Fulminium is a high-atomic-number transparent orange crystalline element that occurs only in magical environments. Fulminium atoms may spontaneously undergo atomic decay, producing paired electrons and electron holes, along with light in the UV and orange parts of the EM spectrum, plus heat. About 5 to 10% of the total energy output of Fulminium decay is heat (depending on the purity of the crystals), and the electromagnetic radiation output is about 1% of the total energy released.

Fulminium atomic decay stimulation is not all-or-nothing like U235 neutron capture. The more UV that a Fulminium atom absorbs per unit time, the greater the probability of it decaying. Fulminium has piezoelectric- and semiconductor- like properties, meaning that it produces a direct electric current when clamped between dissimilar metals, and if mounted upon one metal and struck by a dissimilar metal striker at the opposite end, it may release a higher voltage and current charge accumulated between strikes than that of clamped crystals.

A new Fulminium reactor is typically designed so that it produces its full rated design power output with its UV absorbent shutters set at about 25% open. As a reactor ages due to use, it becomes poisoned by its opaque decay products, and the shutters must be opened further in order to achieve the same output. When the maximum output drops below its rated design output despite the shutters being fully open, it is time for the Fulminium crystals to be melted down, purified and remanufactured.

If a Fulminium reactor has its shutters opened too far, the reaction may run away and the reactor may melt down or explode.

A traditional Fulminium reactor typically consists of a number of Fulminium crystals clamped between dissimilar metals within a mirror-lined box through which air is passed as a coolant. Moveable opaque shutters are placed between the crystals as a means of control. Because of the necessity of air cooling, the crystals must be relatively widely spaced.

An alternative design intended to produce very high voltage and current spikes over short periods of time are similar to the first type of reactor, save that the metal at one end of the crystal banks is not clamped to the crystals but designed to strike them, and the shutters are designed to open for a short period of time before closing again until the crystals are struck.

Fulminium crystals are relatively fragile, and have a tendency to shatter if subjected to a sufficiently great thermal gradient across their volume. Since a reactor relies upon the crystals being solid from one end to the other, a broken crystal would both reduce the output of the reactor and increase the probability of the reactor entering a failure mode.

The purpose of this question is to find a way to redesign a Fulminium reactor of a particular rated output to be smaller and lighter.

You need some pretty chemically advanced substances (somehow I figure you're aiming for a "steampunk" vibe - this will not be it).

However, what you want is something like linear perfluoropolyether. These are liquid, stable in a wide temperature range, non-conductor (which is good since you don't want stray currents in a fulminium core, I'd guess) and chemically inert. The monomer units absorb ultraviolet almost completely, curing into the polymer form that is transparent to UV (and visible light too, with a very low refractive index).

Also several other fluorocarbon fluids are suitable. Here is an absorbance spectrum for one of the latter; below the absorbance for some common and ultrapure waters (as you can see, it's mostly the impurities that drive UV absorbance). Fluorocarbons behave better than ultrapure water in this respect, and have a significant thermal capacity.

A completely different approach would be to drench the crystals in, say, ethanol, and rely on its phase change to eliminate heat. The crystals would stay at about 80 °C temperature, or less if pressure is decreased, and the total fluid present wouldn't need to be as much as in the water cooling model, so, even if the absorbance of ethanol is comparable to water's, the total absorbed energy would be much less. You would need the same heat exchanger to re-condense the ethanol and put it back in circuit. Basically, the reactor core would behave like a heatpipe, which introduces some interesting failure modes. 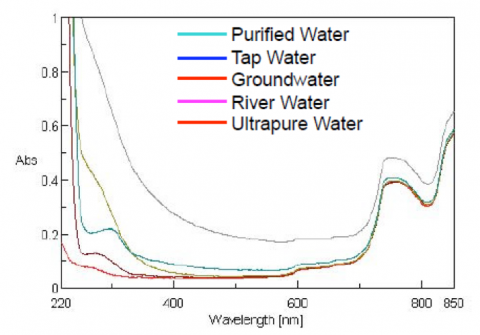 First, where is UV? It is the wavelengths just shorter from visible light.

It can sometimes be important to determine how much water might be in ethanol, both to avoid watery drinks and to limit introduction of water into ethanolic fuels. You can do this by looking for the UV absorption of the water, which pure ethanol does not have. 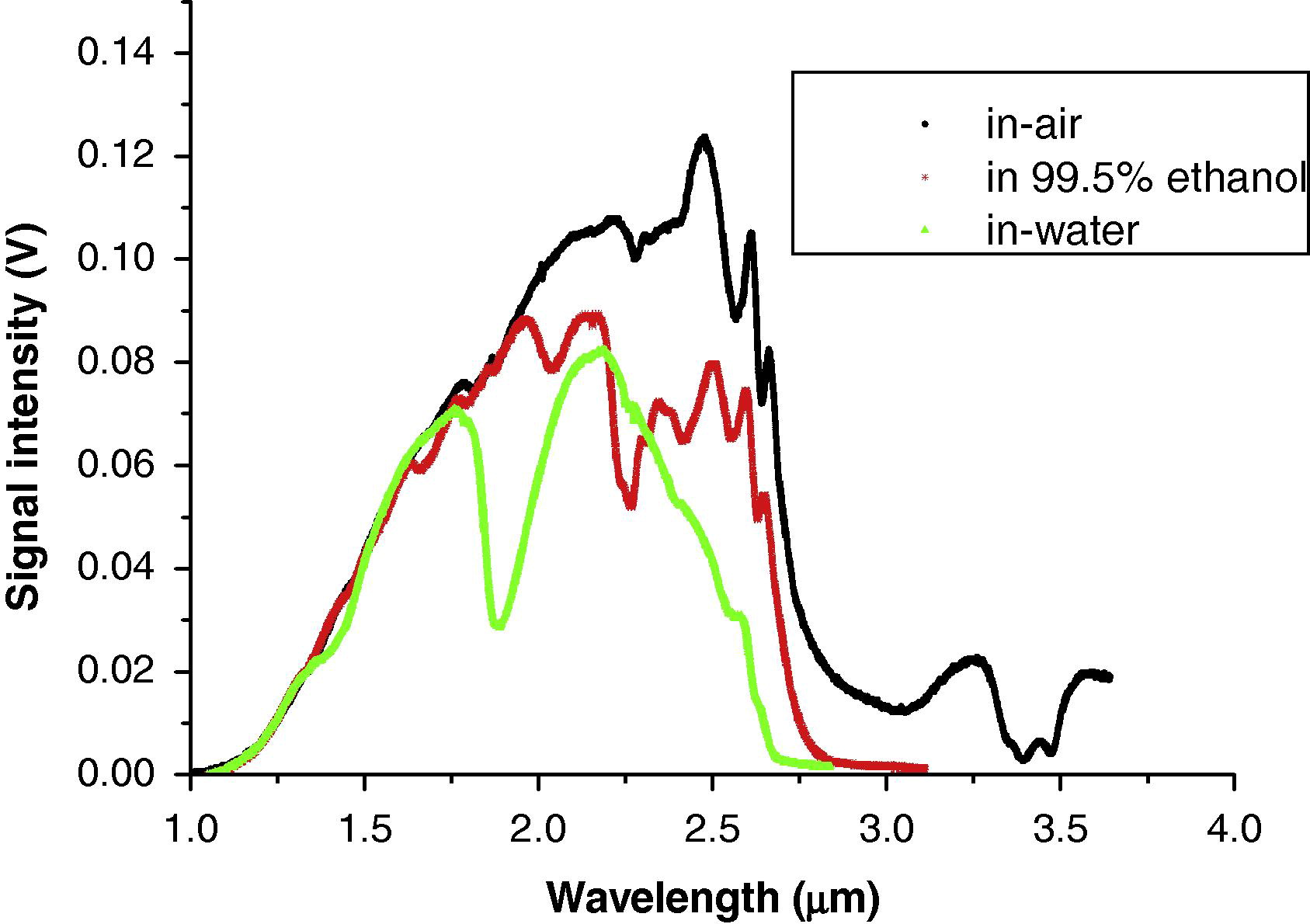 See that big cleft in the green line? That is water absorbing the UV. Ethanol does not have that.

You can use ethanol as your cooling fluid. It is cheap and safe. Plus when things get slow at the plant you can have a little sip, because it will have that great taste of Fulminium!

You're describing something that isn't a very long way from a conventional nuclear fission reactor, where radioactive decay is triggered by neutrons and emits neutrons and energy. What you actually need to be able to do is control the rate of the reaction so it doesn't explode and then and rely on the density of the Fulminium to sustain it.

In nuclear reactors, control rods (made of a neutron absorbing substance) are used to control the reaction, often by being mechanically raised/lowered into the reaction vessel. You can use pretty much the same trick here, almost anything which is UV absorbing will work, and you can then control the reaction by moving it in/out of the reactor. You could use a liquid metal (e.g. Mercury) which would have the advantage of being a good thermal conductor so could also transfer the heat away to somewhere useful! As a bonus you could put it in narrow "thermometer-like" tubes and it would raise/lower in level with temperature making the control mechanism self-balancing.

Not the answer you're looking for? Browse other questions tagged science-based physics chemistry light .

8
Economic feasibility of RTGs for base power
12
Mr. Fusion reality has a global warming problem
5
Would this positron reactor work?
14
What are the risks with massive banks of batteries/capacitors?
7
Small-scale aviation without fossil fuels
6
Making Titan's atmosphere transparent
18
Electricity without electrons
4
Can a crystal grow or propagate faster than 'c'?
3
Orbital Warfare Maneuvers