How do I make my soldiers jump higher

I need a mechanical way to make my soldiers who are combat explorers in a forest to be able to jump higher than normal. They will be equipped with a variety of weapons from normal hand held weapons up to rocket launchers, and grenade launchers. Most soldiers will be armed with a normal rifle or smaller weapon platform plus a choice of light rocket launcher or a grenade launcher, not both. No soldier will have more than that weight wise other than reserve ammo, and a backpack containing basic survival necessities.

The time period for equipment is our normal history up to the end of ww2, but there is also the inclusion of dieselpunk (it also doesn't take place on Earth, but the planet is similar enough). The main area this would be used would be in a thick forest where movement at the base could be near impossible at times.

Ideally there would also be a combat application to it as well where it would allow soldiers to reposition across the battlefield quickly. For our band of soldiers the battlefield is 360 and there really is no real frontline. Something that would let them hop over terrain, let them hop from tree to tree like a monkey, or scale the sides of a shallow mountain, or slowly hop down from a large height using their environment.

The absolute MAX jump height would just need to be 3 meters, if they want to go any higher they would need to make successive jumps and make a path using their environment.

I am totally fine with elements of handwavium/unobtanium so long as there is a mechanical component to the equipment and sort of grounded reality to it (so no hardened skeleton system + better muscles and that's all). A dedicated resupply squad also joins the team, so replenish able sources are totally fine.

Note that jumping in this case doesn't have to mean only mechanical motion from legs or springs. Something like a jump pack/jump kit from Titanfall or star wars would also be considered a jump device (jump packs from both of those settings just seem a bit to futuristic for this setting, but the use of fuel or gas is valid so long as it doesn't toast the buns of our gang to much).

If one needs an idea for weight, think of something like a US paratrooper during WW2 with all their combat equipment strapped to them, including their extra equipment. 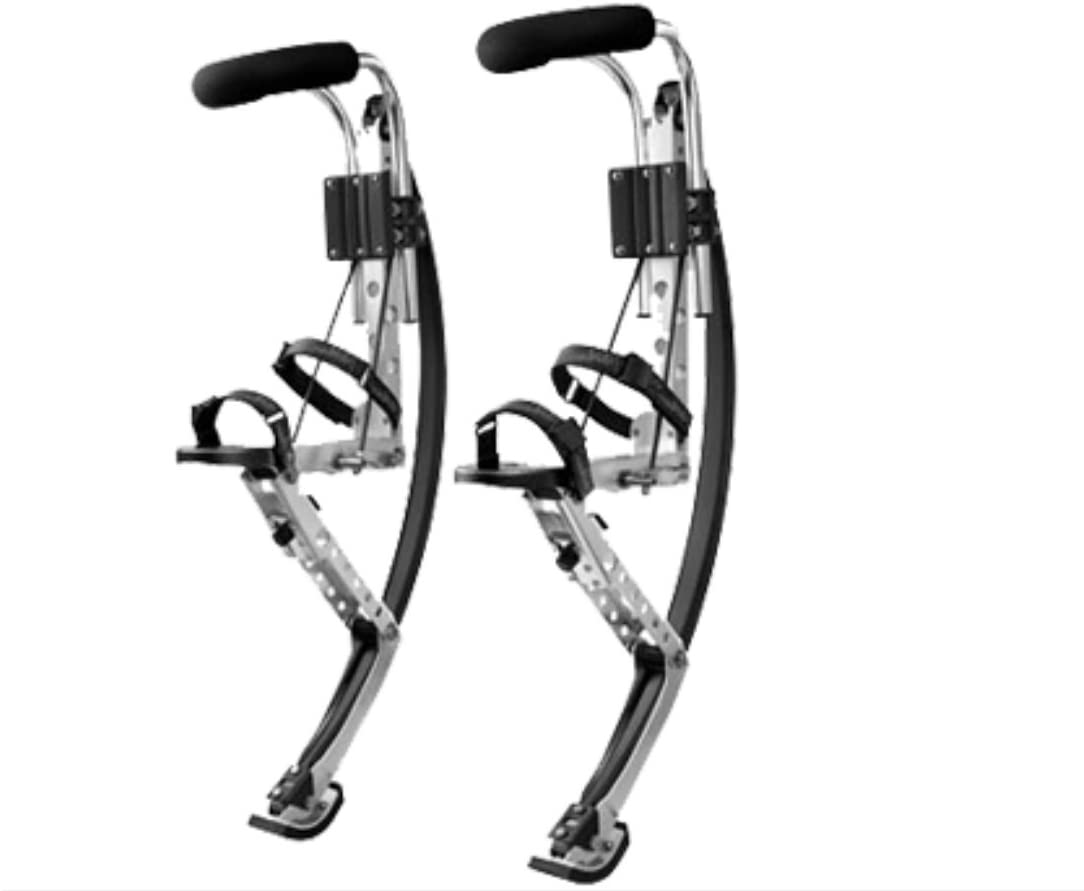 I had a set of these years ago, they're basically a spring extending down from your calf to about 30cm below your feet.

With practice, you can run faster and jump much higher than you normally can. I was having so much fun I never stopped to measure how high my jump got, but I could touch a gutter with my hand that I later measured was ~3.6m off the ground (I'm 166cm tall normally).

They work best on concrete or brick or similar, but I was able to use them "off road" (as in packed dirt or grass) with success. Your are vulnerable to tripping if your not aware of the surface your manoeuvring on, (and when you fall, you need a lot of energy to get back up without help or undoing them), but practice could make perfect.

Ash's kangaroo boots are a great option, but if we really want to lean into the Dieselpunk style, consider something like the Soviet 'rocket boots'. These were essentially a pair of two-stroke pistons on either side of each foot connected to a platform under the sole. Stepping down compressed the fuel-air mixture in the piston, and when ignited they would push the user up, up, and away.

The inventor got up to 10 mph in them, and a test runner reached about 22 mph. No mention of maximum jump height, but according to Google the average person's top speed when running is somewhere around 5-6 mph. Assuming they manage a 2-4x boost to your jump along with your speed, that takes the average person's jump height from ~16 inches (again, a Google 'rich snippet' value) to 32-64 inches, or a little over 1.5m at the upper end.

This was with real-world 1970s technology, so the amount of handwavium to punch these numbers up to get your 3m jump height is probably minimal. 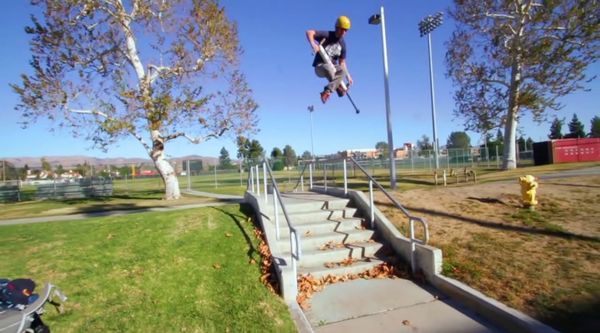 Your soldiers carry pogo sticks on their backs. The unobtainium springs capture the energy of their descent, and when they are in a hurry give it right back; when they hit the ground they decelerate over a split second then bounce right back up nearly as high as they were. For long drops you need an exosuit on because it is still a lot of work for the quads.

The super pogo will be good for other things too. Of course you can move quickly on it although the exosuit itself is about as good; mostly this is useful if your exosuit is damaged or you don't have it, but you have the pogo. A changed setting will keep the spring coiled and after jumping down the soldier can stay on ground level; the pogo will gradually uncoil the spring if desired or (more dangerously) stay coiled until deployed. A soldier can gradually coil the spring by making a lot of little jumps and storing the energy. That can be used for an ascent, or punching open doors.

I note that the super pogo stick also finds use as a nonlethal weapon. A boxing glove might be placed over the foot for this use.

Short-burst jetpack mounted on the back.

The exhaust can be directed to the sides for safety or further to the back to also give a strong forward push and not endanger the wearer. There can also be special heat resistant trousers for jump crew. The need to have it compact would stop you from flying around for longer as carrying a larger fuel pack would make you less nimble.

There is a really nice dieselpunk design by Safdar Ali Mirza which shows how a jetpack could look like in that genre:

I would recommend a combination of the super pogo stick, Soviet diesel boots, and kangaroo legs. Basically, do an image search for "digitigrade stilts" and use those pics as a starting point. Also check out the video game Valley and their L.E.A.F. suits.

Basically, though, take some digitigrade stilts, extend them upward to connect at the hips; maybe incorporate a torso element with a pack frame. Paint them olive drab, of course. Now add some beefy-looking coil springs or volute springs--components that will visually remind people of tank suspensions--to the thigh section and maybe the calf section as well. Think about adding some lightweight armor panels to protect the knees and thighs, or maybe the knees and shins or just the knees? Throw in some small diesel pistons (like on the Soviet boots), and presto: you've got a combat engineer's load-hauling frame.

The Load Bearing Equipment, Individual, Engineer's (LBEIE, commonly called "Elbies") were, of course, originally developed to give combat engineers the ability to carry heavy loads over soft, muddy terrain. Once they reached the fields, trouble with the speed and force limiters led engineers to routinely disconnect or remove those devices, and they discovered that with practice, a skilled user could run at competitive hundred-yard-dash speeds while carrying a hundred pounds of gear, and have a vertical leap of around six feet.

It might not be as instantaneous as a jump-assist technology, but what about a hot-burning material, and a personal hot air balloon?

All that's really necessary is something to heat /fill the air inside the balloon fast enough, and they'd have as much vertical as they need-- until the material runs out. Something similar might work for lighter-than-air gases, and a blimp sort of structure.

Not the answer you're looking for? Browse other questions tagged technology science-fiction military power-sources .

5
Ideas for how aliens would approach this fight?
6
Feasibility of mute Soldiers on a medieval battlefield
1
Shoulder Mounted Weapon Design in a dieselpunk/ww1 time period
6
Recoilless Rifles vs Bazookas against non Mechanical Targets
2
What kind of support forces would accompany a one-noble armored fighting vehicle into the mountains on a propagandized anti-insurgent mission?
3
How capable would this android be against a modern military?