Scaling up the bat wing: still a good alternative for a large flying animal or inferior to a pterosaur wing?

My creature is an alien roughly 3 meters tall while standing (roughly 2,5 meters at the shoulders, with arms that can touch the ground while standing upright) and weights roughly 220 kg (roughly 485 pounds). It's overall metabolism and organs involve a potent respiratory system like that of birds and pterosaurs an it's bones are also similarly structured, being pneumatic bones. My main concern is their wing design: at fist I planned for them to be bat-like, but I'm not the most knowledgeable in how active flapping flight works in its more complex details. I do understand that the mammalian respiratory system and bone structure are 2 important points in restraining the size of bats, but not whether their wing structure is a problem.

My question: can a large, 220 kg (485 pound) creature with a respiratory system and bone structure more similar to a bird's or pterosaur's make use of a bat wing structure efficiently to fly or would a wing closer in overall structure to a pterosaur's (like seen in the azhdarchid family) be the only alternative at its size?

Clarification edit: what I'm trying to know is whether the bat wing design (a wing membrane or patagium supported by at least 3 long digits) can still be effective in a larger flying creature such as the one I mentioned or if my only option is to rely on a wing more similar in structure to that of a pterosaur (in which the patagium is supported by a single elongated digit). I'm well aware that it's extremely unrealistic for such a large animal to beat its wings over 4 times a second like you'd see in some bat species.

As for type of flight and wing loading: ideally the creature should be able to take off vertically with its wings, so a low wing loading, preferably around 20-22 kg/m^2 would be ideal. For now since I'm more interested in whether it'd still be possible to employ the bat wing design, the creature needs to simply be able to fly in an open field devoid of obstacles, preferably without being too dependent on soaring flight based on air currents like you see in albatrosses, whose wings are I'll suited for powered flight.

Assume the planet is identical to earth with an atmosphere and similar to that of the late cretaceous period, because it essentially is (parallel dimensions, related to the plot, not to the question).

First bat wings are more efficient wings than birds, so switching to bat like wings just makes your creature more likely not less.

Second switching to a bird cardiovascular system increases its cardiovascular efficiency but may have little impact on the wings. Most of the bones in a birds wing are not pneumatic. making all the bones in a bat like wing pneumatic will have more impact than a birds wing, but how much is not clear. the limit on wings generally it not weight but loading, which is an effect of the total body weight of animal. It will make them better fliers because their breathing is more efficient and it can make wing bones stiffer, but the effect may not be large. whether they are powered fliers vs soarers really depends on how far you want them to travel, a powerful stroke means they will fly less often, soaring is just more efficent.

Vertical take off, again you are fine the largest animals to ever fly Quetzalcoatlus used vertical take off, pterosaurs cannot run, running take off is unique to birds due to their strange evolutionary history, having evolved from runners not climbers, and a giraffe sized animal is not climbing a tree.

220 kg is big but within the bounds of the largest known animals to fly (200–250 kg), which again we know used vertical take off.

Probably not with the specific trio of ‘modern-day earth-like atmosphere’, ‘vertical takeoff’, and ‘bird/pterosaur respiratory/bone structure’.

However, if you were willing to relax one or two of those, maybe.

There’s already a lot of variety in bat wing morphology, and some of the larger diurnal bat species already use thermal or slope soaring during foraging flights to save energy, you'd need to apply strong evolutionary pressure to select for size and geography to promote soaring.

This site discusses some similar problems and potentially plausible solutions about the physics of ‘dragon flight’, based on a set aspect ratio and lift-to-drag ratio of the wings; the conclusion being highly improbable, biologically speaking, but not impossible (an enormous energy requirement powered by a small internal combustion engine and muscles inspired by dielectric elastomers).

Also, this paper discusses the aeronautical differences of Quetzalcoatlus vs today’s birds, insects, and aircraft, and how an atmospheric pressure increase when Quetzalcoatlus existed may explain that. As this may have occurred at one point in Earth’s history, you could lean into the ‘parallel dimension’ aspect to handwave this.

Square-qube law says... It's possible up to a certain point

There's a very good reason why larger creatures are the thing of legend and distant past, especially ones capable of flight. The larger the creature is the exponentially heavier it becomes and, after a certain point, any excess growth actually becomes a handicap rather than a benefit. If you want larger creatures in your world, you have to define where that line is and that becomes even harder if you want those creatures to fly.

Could you have a large creature weighing in slightly over 200kg that's capable of sustained flight? It could be done, but it's a stretch realistically speaking, since the creature would have to have pretty large wings and insanely powerful wing muscles in order to achieve sustained flight, which would force it to have at least half of its total body weight in its wings alone. The further you scale up the size of the creature, the more of its weight and power has to be diverted into the wings.

This is the main reason why western dragons are considered to be the most realistically depicted dragons. Their strength and their body-weight is concentrated in their wings and, the larger the dragon becomes, the smaller its actually body is and the more wingspan it requires.

If you want to retain your Earth like world (in other words not drop gravity or raise atmospheric pressure) then your creature can only get as big as Quetzalcoatlus Northropi. Look it up for details, but I think the graph gives a great idea of the scale. 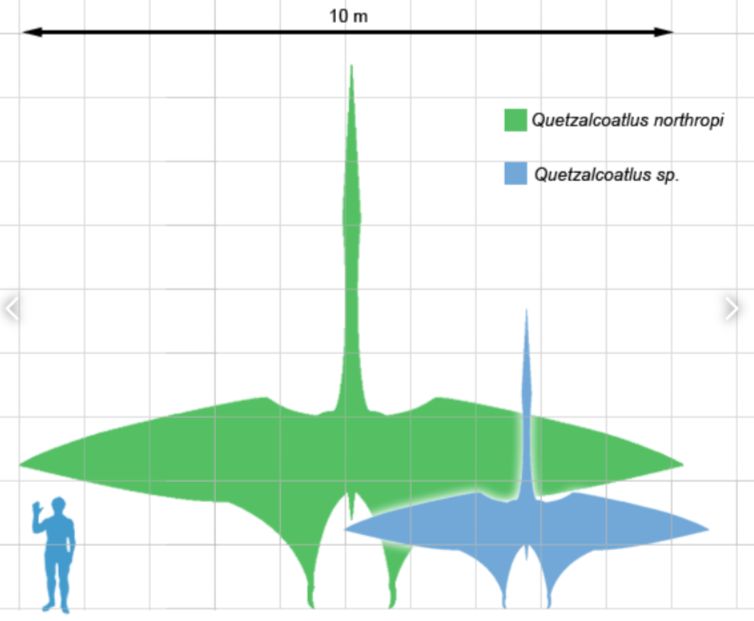 The answers of a previous question of mine might also be helpful:

Not the answer you're looking for? Browse other questions tagged xenobiology anatomy flight .

12
How CAN we scale up living creatures to be giant sized?

7
Creating a Scientifically Semi-Valid Pseudo-Arthropod Primate Part 1: Pseudo-Dragonfly Wing Rib Muscles
10
Keratin wings: would they work?
4
How heavy can a dog-sized creature be with wings about 2-3 times its size?
7
Anthropomorphic flying squirrel, gliding capability
6
Could the MUTO wing structure work in any way?
7
What Is The Best Wing Design For A Giant Flying Animal
6
Bee-like vertebrate flight surface
3
How would the wings of a sphinx or a manticore need to be in order for the creature to fly?
3
Can a robot which flies like a bat have telescopic wings?
1
Might this animal be able to fly?