I need a weapon that is shoulder fired that can deal with heavy monsters such as a minotaur and the likes, but light enough so that the user can carry at least another small arm without to much hassle.

Two of the weapons I am considering arming my explorers are either a rocket launcher the likes of the bazooka (60mm) and the second a recoilless rifle such as the m18 (57mm). I am trying to consider the pros and cons of each because in this setting they won't be facing heavy tanks like a tiger 2 or is3.

Both are HE based, but the main difference is muzzle velocity (rocket vs bullet). How much of a factor would this really be when fighting monsters, and would the speed difference between the two really make much of a difference (from what I understand chemical weapons such as hesh/heat aren't velocity dependent). It seems for the extra speed, recoilless rifles have a far greater back blast from what I've seen as well.

My main point of contention/question is what are the advantages/disadvantages of either in a setting like this, and if I were to scale the warhead size up and down would it tilt the balance in either way.

The M18 is a 57mm recoilless rifle used by the US in WW2. It fires a bullet like projectile to hit its target, gas is vented out the back of the gun to counter act the recoil affect from shooting the gun.

Both systems have deadly backblast, as in if you stand behind when either is fired, your going to get seriously injured.

The minotaur in question will have some decent armor on them, think of like an interwar tank and some early WW2 tanks. (15-20mm on avg ends, and a max of 50mm on the higher ends (mm calcs are in reference to RHA or Rolled Homogenous Armor)). Height can vary for the avg sized to be 1.8m on the avg size to 4m on the max. The lighter they are the faster they are, the larger they are the slower they are. The largest ones are used more so in a support role than a classic in your face type of mob. Think like throwing large stones as artillery, or moving supplies etc.

Minotaurs would be the equivalents of tanks, where in they can take damage and dish it out. As for speed they would be understandably slower than a combat capable soldier given their size and armor ratings. If they can close in on soldiers it will be devastating, however they are not above simply throwing large objects like rocks/small boulders or setting up ambushes/ using their strength to set up a large scale ambush. 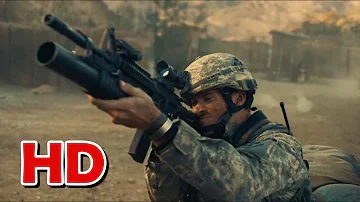 This is a still from the movie The Outpost, set in 2012 Afghanistan. Youtube offered me clips from that movie which were very exciting. This character carries a rifle with attached M203 grenade launcher, and he wears a bandolier of grenades.

I think this would be perfect for your situation. If you decide to have me be one of the characters, I will have an additional M203 clipped under the first. Also instead of a bandolier I want all of my clothes to be made of grenades.

If you have to choose between those two specifically, the Bazooka is better. It is much much faster to deploy. Recoilless rifles are almost impossible to use without a tripod, they are just too heavy. the m18 weighs nearly 45lbs while the bazooka weighs only 15.

Another option would be the M72 LAW 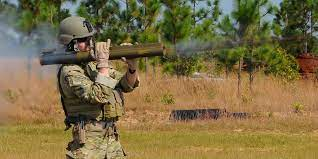 Its a one shot, so not re-loadable but the thing is it's light so if necessary every soldier in a squad could carry one as part of their kit even if only one or two of them specialize in using the weapon. (Note the picture shows the weapon in its extended 'ready to fire mode'. When carried in 'stored' mode it's much shorter.

More than enough hitting power. Between it and the grenade launchers, you would cover the entire specified size range of Minotaur's without having to rely on heavier 'crewed' weapons.

Unless the minotaur is armored in some way, what you probably want is an elephant gun (https://en.wikipedia.org/wiki/Elephant_gun), a large caliber rifle with extremely high stopping power against large, dangerous game animals. This satisfies both the low weight requirement (both a bazooka and recoilless rifle and their ammunition are very heavy) and is designed with the necessary ease of aim needed to track a large moving target, like a minotaur.

[EDIT] The querent has clarified their question to indicate that the minotaurs have armor equivalent to 15-50 mm of RHA. This is still within the effective penetration of armor-piercing rounds fired from an anti-tank or anti-materiel rifle (https://en.wikipedia.org/wiki/Anti-materiel_rifle) or (preferably) heavy machine gun at short range without the dangerous backblast from a bazooka or recoilless rifle or the risk of the warhead blast injuring friendly troops at close range and with the advantage of lighter ammunition. If you want to have fun with with the concept, there is even specialized AP ammunition such as the https://en.wikipedia.org/wiki/Raufoss_Mk_211, which is conveniently armor piercing, incendiary, and explosive at the same time.

A combination of using AP ammunition for less armored minotaurs and with rounds from a HEAT firing weapon reserved for the most heavily armored minotaurs would probably be best to minimize the supply burden on the hypothetical explorers.

Weapons are by and large designed around the enemy they're supposed to defeat. Since "minotaurs covered in WWII tank armor is not a thing that exists IRL, No IRL weapon is going to be perfectly suited to defeat them. So lets look at the properties of your minotaurs and see what we want.

Minotaurs by nature are going to be deployed in a way that will let them get in close; e.g., in room-to-room combat or in densely forested environments. As you've described them, they're not sufficiently survivable to be out in the open. Their armor should protect them against most IRL antipersonnel weapons, up to and including .50 caliber BMG with standard ball ammo. (Look up Demolition Ranch to get an idea of what a .50 cal will and will not punch through. You'll be surprised about a lot of the "will nots.") Once you punch through their armor, however, you don't need anything special such as explosives or incendiary rounds to kill them. They will fill most of the armor, so anything that punches though the chest plate will be going through vital organs, and be pretty effective.

First off, you want to avoid explosive-round weapons, except possibly anti-tank grenades. At range, both the bazooka and the recoilless rifle will require a direct hit to actually defeat the armor, and neither of them are really good at hitting small targets. They're both inaccurate, cumbersome, and have slow-moving projectiles that a minotaur might even be able to dodge at the supposed effective range of the weapons. Once the minotaur gets in close, explosives will kill your own soldiers, probably as well or better than they kill the minotaurs.

When it comes to regular bullets piercing armor, the three things that work are hardness, velocity, and sectional density.
If you have modern technology, all three can be achieved in a reasonable package with APFSDS rounds. You'd probably want a tungsten dart, 4-5 mm in diameter and 150-200 grains in mass, firing at or above 800mps. The sabot would expand the diameter to 7.62-8.5 mm bore, so that the pressure and barrel length would remain reasonable.
With more 60s to 80s technology, you'll probably be forced to use magnum rifle rounds and .50 caliber rounds. Both of these would require armor-piercing ball to be effective, and would be a royal pain to fire.
With WWII technology, your best bet would be a 20mm anti-vehicular rifle, preferably with some kind of hardened rounds (e.g., steel core with a copper washer.) For close quarters, and room-clearing, you'd have to retreat and use antitank grenades or artillery to demolish the structure.
Share
Improve this answer
answered Apr 15, 2021 at 7:02

The recoilless rifle is better. We need a bigger gun.

Although you don't provide an exact speed, minotaurs are generally portrayed as being pretty fast.

As a result, I'd go with the higher muzzle velocity of a recoilless rifle.

Additionally, I don't see any reason why the recoilless rifle should have problems taking one down. Nevertheless, you might want to equip it with a shrapnel round as opposed to HE.

EDIT: As @JanHudec mentioned, RPGs also aren't very accurate. While there are some semi-accurate spin-stabilized variants, they are few and far between. As a result, the recoilless rifle will also be your weapon of choice for longer ranges.

EDIT: You have clarified that these minotaurs have roughly the same amount of armor as a Pz.Kpfw. III Ausf. E. As a result, recoilless rifles (which I originally suggested) aren't going to be effective unless you get a lucky shot. For that matter, even a bazooka will have issues. You're gonna need a bigger gun.

Therefore, I present to you the only effective man-portable weapon for this usage case: The Panzerfaust. Commonly used by the Germans during WWII, they are pretty much guaranteed to penetrate a minotaur's armor and kill it. However, this impressive killing power comes at a cost: their speed (and therefore range) sucks, and they aren't reloadable.

If panzerfausts aren't an option, I guess you could go with a Flak-Track? There really isn't much else you could effectively use against that combination of speed and armor. As @PcMan put it,

You will need a tripod or wheelbase mounted anti-tank cannon.

You might want to go with an RPG. Their HEAT warheads are very effective against WWII-era armor (provided you can get a hit), and the logistics of carrying and reloading them are relatively simple.

However, most models of RPG have a minimum arming distance before their grenade can detonate. Additionally, they only fly in an arc regardless of model. As a result, a well moving target is pretty hard to hit, especially at the close ranges minotaurs would prefer.

As a result, you might want to consider some other options in addition to recoilless rifles and RPGs. Claymore Mines shred anything and can be setup and let off from a distance, but at the cost of not having much armor penetration. Carl Gustave-style RPGs penetrate well and move at a decent clip, but are heavy and still have the minimum arming distance. Perhaps you could try some 20 millimeter machine guns?

Not the answer you're looking for? Browse other questions tagged technology warfare military kinetic-weapons rockets .

7
Micro Missiles combined into a compact rifle platform?
5
How hard would it be for a post apocalyptic society to create rocket launchers?
5
What explosive mines discriminate against hovercraft?
7
How to make pneumatic weaponry/airguns the main weapons of a miliary force?
1
Shoulder Mounted Weapon Design in a dieselpunk/ww1 time period
6
How do I make my soldiers jump higher
5
What would replace/be the next evolution of tanks in the future
6
Intercepting/surviving tank based high velocity kinetic weapons
6
Feasibility of active defense systems against kinetic weapons