What substance would make a good lava ocean?

I'm starting work on some fictional star systems, and I want to create a planet that has lava oceans. I found an excel spreadsheet a while back that does calculations for stars and planets, and based on the information I have from it, the star has a classification of K1.1V, with a surface temperature of just over 5,000K. Orbiting with a semi-major axis of about 13.7 million km and an eccentricity of about .38, the spreadsheet gives me average surface temperature of 699K, with the periapsis temperature being 822K and the apoapsis temperature at 600K. The planet has a radius of 1,472 km, a mass of about 8.54311x10^22 kg, and no atmosphere of any significance.

Given those parameters, I'm wondering what sort of crust composition would allow for a surface on the daylight side that would be mostly solid but have lava oceans. Obviously, I'm looking for different substances for the solid ground and the lava seas. The calculations I have don't give me different temperatures for the day and night side, so if that information is needed, I'm not really sure how to calculate it.

Let us start with reasonable candidates. 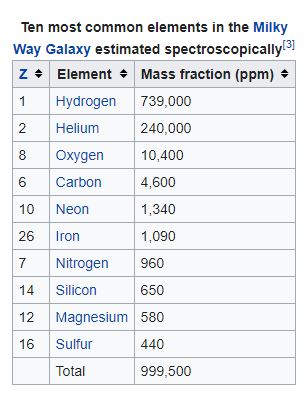 Of course there are combinations which will be oxides and sulfides.

The gases will be gases and have departed and metal and silicates will be solids, for your walking pleasure. Sulfur has phase changes in the territory you have stated for your planet. It melts at 388K and boils at 717K. That is perfect because not only is there a molten sulfur ocean there is a sulfur hydrologic (sulphologic?) cycle! The top layer of the ocean will boil when it gets hot enough and then as things cool, sulfur rain will rain down and return to the lava lake via streams and rivers.

Now here is the coolest of the cool - I wondered if such a thing as a molten sulfur lake really exists! They do! Not only on Io, but right here on Earth! 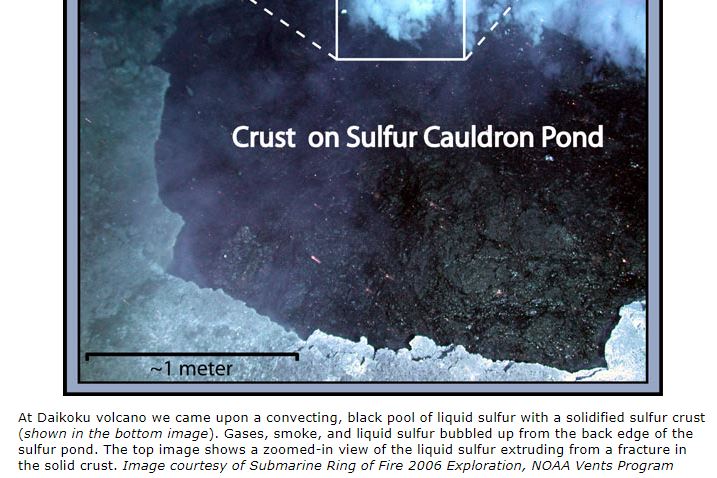 Last night, we came across another extreme of sulfur volcanism in the solar system, a convecting pool of liquid sulfur under more than 40 atmospheres of pressure! At first it was rather difficult to see the pool's surface, because the sulfur was black! However, as we stared through the remotely operated vehicle (ROV) Jason's eyes into the pit, a roiling dark surface of partially solidified crust came into focus. This was a rather precarious place for the Jason ROV, but the long experience and confidence of the Jason team once again came through for us. A sulfur sample was obtained by dropping the anchor chain of one of our markers into the lake. The temperature (187°C, or 369°F) was measured by gently nudging Jason to the very edge of the pit and slowly lowering the temperature probe into the sulfur.

I am really delighted to find that I share the planet with molten pools of sulfur. In any case sulfur would be great for your planets molten lake. I don't think they will be black, but shades of yellow and red.

24
What effect would liquid sulfur oceans, sulfur dioxide in the atmosphere have on visibility, sound propagation and other environmental information?
10
How would this tidally locked planet be affected by its moon and would the moon have a deaccelerated orbit?
9
How Would An Advanced Race Capable of Colonization Classify Planets
4
Could humans colonize this planet?
2
Calculating the orbits of binary stars around their barycentre
1
Surviving on a planet with an eccentric orbit
5
What would the temperature variation be on this planet? (High eccentricity & slow rotation)
5
How to figure out layers of the atmosphere?
5
How to Determine Planetary Extremes of Temperature from Average Global Temperature?
1
Calculating the Atmospheric Properties of an Exoplanet