Just to be clear: this hypothetical planet had no magnetic field and didn't have materials present on the surface required to form complex life before it was terraformed. The act of terraforming does not also involve genocide beyond something as complex, or as self-aware, as E-Coli. Or in short, if it is terraformed, none of the organisms have something akin to brains. No sentient life forms are being killed. THE PLANET AGAINST ALL ODDS HAS EXPERIENCED NO GEOLOGICAL ACTIVITY PRIOR TO TERRAFORMING (or maybe a little, but the absolute bare minimum.

To clarify: by environments what I really mean is geo-biological environmental relationships, where biology has shaped the environment of the area, where a unique state is created by some of the geological and ecological features in the area. A geo-biological example of this might be fjords, where the structure was carved out by slow-moving glacial mountains which then melted, contributing to U-shaped valleys. Not directly biological, but that's what contributed to the cooling and warming environment in the first place, to the point where they wouldn't have formed if it weren't for the actions of various organisms. It should be noted that purely geological phenomenon is being excluded, as is a purely ecological phenomenon. Environments that are the result of the two are what I'm (not) looking for, forms that aren't present on a recently terraformed planet, what's also not included in this question is for example is the impact craters created by smashing ice containing asteroids down on the planet.

So, to repeat which biologically-geological-ecological environments WOULD NOT be present on a recently terraformed planet.

It should be noted that its features not present, e.g. ones that require a substantial amount of time to form. 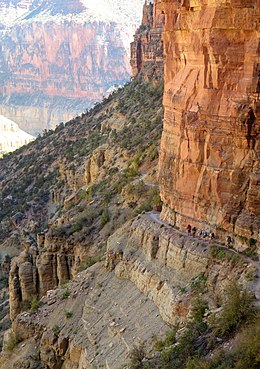 Depicted: the Muav limestone of the Grand Canyon in the US. https://en.wikipedia.org/wiki/Muav_Limestone

Limestone is a sedimentary rock formed by the accumulation of shelled creatures over time - and so a biogeological formation which I think is what you are looking for. It is common worldwide and many familiar ecosystems have underlying limestone geology. Cave systems are often in limestone because of the propensity of this type of rock to be eroded by water. The same is true for many canyons.

So there you go. Ho hum. No limestone. No quarries under Paris. But you cant really make having no limestone a feature which makes your readers keep turning the page. I think a more interesting question is what sort of biogeological features might be unique to a recently terraformed world that you could use to identify it as such. I am thinking of things like baby banded iron formations right at the surface. A rusty new world.

Sedimentary rock such as sandstone, shale, slate, silt stone and mud stone would not be possible as water is required for these rocks to form.

As on the Moon, which has an effective vacuum, the finer fractions of surface regolith will be sharp, angular and most likely abrasive.

After terraforming, expect landslides as rain water will cause a lot of loose surface material, on slopes and cliffs, to fail and mobilize. Likewise do not expect regions of deep regolith to be stable for a long time as they will consolidate over a prolonged period due to the effects of rain and surface water, post terraforming.

I'm assuming the atmosphere of the terraformed planet will contain significant amounts of oxygen. Initially the atmosphere will also contain gaseous products of oxygen reacting with minerals and metals in the surface rocks.

The surface and atmosphere will have very little carbon.

No features of erosion, since most liquids can't exist in vacuum and the ones that can probably wouldn't come in big enough quantities.

That means no canyons, no valleys. No meandering rivers. No caves. No sea cliffs. No waterfalls. Not as much soil and sand as you're used to on earth.

Overall the landscape might have a more jagged appearance than earth, pockmarked with very random-seeming bits of destruction, such as round lakes that used to be impact craters.

See a map of mars for an idea of how breaks in the landscape would not be smoothed down into a pleasing harmony with the surrounding land, as they are on earth through erosion.

Not the answer you're looking for? Browse other questions tagged science-based science-fiction environment terraforming ecology .

3
Could a human colony persist long term on a planet with limited food and water resources?
5
Could a partially-terraformed planet be habitable?
8
I want to build a flat Earth, for real
6
We Have Successfully Established Plants and Insects on Mars. How Long Will It Take Them to Colonize the Entire Planet?
3
Minor terraforming that allows people, and doesn't inconvenience local flora and fauna
36
Signs of wealth in a world where private planet ownership is common
6
What is the minimum viable ecological pyramid a terrafoming project would introduce to world with no life to make it suitable for humans?
4
How long can this planet hold its atmosphere?