Benefits of the Quicken Enchantment On Items

This is long overdue, but here it is, a question determining the usefulness of the Quicken enchantment on items.

Please note that while this makes it easier to make an Enchanted object start moving, it doesn't make it any easier to stop said object. Think of it as a train; once it's picked up steam, it gets harder and harder to stop.

This Enchantment also negates the increased drag, friction, wear and tear, and impact forces an object would experience due to its heightened speed. This Enchantment channels and magnifies the kinetic force going into an object, making it travel faster with less force. This will (most likely) be useful for:

1. Serrated Weapons-Serrated blades are more damaging but cut much slower, and are also more likely to get stuck and whatnot. This question pretty much sums up the disadvantages of serrated (edged) weaponry, but I'm curious as to whether the Quicken Enchantment will make them more feasible for combat.

2. Melee Weapons (in general)-Quickened melee weapons strike me as a potential liability because they will travel faster given the same amount of force as a regular weapon. So while they'll hit faster (and potentially harder), they'll definitely take some adjustment to wield properly.

Quickened Warhammer? Careful lifting it off the ground, or you may find it swinging up into your face!

And let's not even mention what happens if you throw too hard!

3. Thrown/fired weaponry-The faster a projectile travels, the harder it hits. Plus, in conjunction with the Boomerang enchantment, this should enable rapid-fire due to the ammunition's quick return. However, the weapon itself would not be firing quickly, unless someone had killed a Runnark with the weapon firing the projectile itself. Sling, atlatl, bow, or musket-it doesn't really matter, 'cause chances are it can't be done often. They're built for ranged attacks, not melee.

4. Mechanics-Pulleys, for example, would be benefited by the Quicken enchantment, which would make it easier to lift heavy objects faster. My tech level is early Renaissance at the most, so I'm not sure how much can be done here, especially since the mechanical parts need to be able to kill a Runnark to gain the enchantment. Enchanting the raw materials is doable, but will likely give your architects fits....

5. Transportation-I'm sure transportation will be benefited by the power of Quickening, it's just common sense. However, in medieval times, transportation wasn't exactly sophisticated, being centered around boats, wagons, carriages.....these things are sped by what's pulling them, so they'd have to modified for pushing, and then the Quicken Enchantment might make them rush ahead of whatever's pushing them or other nasty possibilities.

I'm sure there are other options, and that I may have missed an important possibility or two, but that's why I'm asking this question: What Benefits Would The Quicken Enchantment Have On Items? 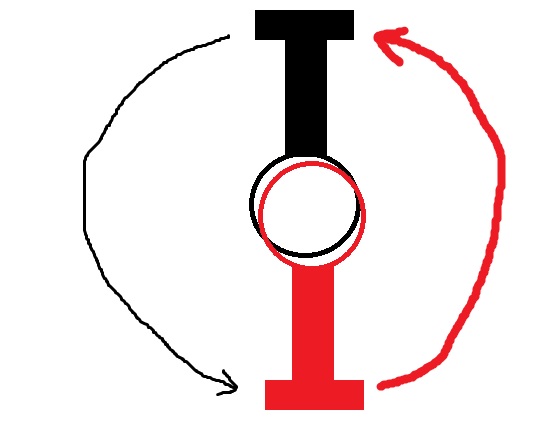 Hammers of equal masses are mounted on wheels and can spin 360 degrees. The black hammer is normal. It is released and falls to strike the red hammer. Energy lost to entropy means that the red hammer would not rise to the position of the black hammer but slightly short of that.

This wheel will spin faster and faster until the speed exceeds structural strength at some point. Before then, hook it to a generator or a vehicle. Free energy for all thanks to the power of MAGIC!

It takes less energy to start it moving than to stop it. That means that if you wiggle it (just a little bit) you can feel the object pulling your hand in the direction of starting to move. The opposite direction leads to the true cosmic frame of absolute rest. You should be able to use this to tell which way the currents are moving your ship, for example.

Chain two balls together, each with the enchantment. Start them whirling around each other and throw. The ball in front will exert its full inertia and the ball in back will move 12.5% more easily. This repeats every time the two circle around each other. The thrust is mild and should stay constant once they reach space, so you can use this to send members of your menagerie of problematic magical organisms at light speed to strike (and enchant) distant stars. Actually, it can do 12% more than light speed -- I'd suggest time travel, but since it does this in relation to the universal cosmic frame of rest, only, you actually can't time travel with it. Pity...

This doesn't answer your question, but responds to some of the perpetual motion answers.

If you want to be pedantic (and I do) the defining feature of the enchantment should also apply when the hammer hits its target.

This is assuming physics behaves as normal, i.e there is no such thing as "at rest". In that case what Quicken really does it make it so a smaller force is required to change the velocity of an object. For example to bring a hammer from your hand shooting forward relative to the planet, or to bring the same moving hammer back to rest relative to the planet.

If the hammer is quickened then the target has to apply a smaller force to slow down the hammer, and since forces are equal and opposite, we get less impact force.

So your 1kg quickened hammer flies 112% faster than the non-quickened 1kg hammer, but does the same damage on impact.

I'd suggest getting some input from some engineers on the effect of your enchantment on mechanical devices, my intuition is telling me that it would have lots of unexpected side effects such as altering the combined moment of inertia when used on the load side of a block and tackle setup, making the load effectively lighter going up or down direction yet the same weight in all other directions because the mass of the load is unchanged.

On a single pulley the enchantment would only act as a lubricant as the relevant forces aren't acting on the pulley, but being transmitted along the length of the rope to the load.

It would also have the unintended side effect of making the load effectively heavier when considering how strong the structure the load is hanging from needs to be as the load is pulling down on the structure with an extra 12% pounds of force. by extention the rope would also need to be stronger to account for the magnified forces.

If you shot a quickened arrow, for example, if maxed out, the person or creature you fired the arrow at will have ten times less time to dodge. That could be really useful against an opponent that travels too fast for a bow that fires normal arrows to reliably land hits. Also, as it can go up to ten times faster, it should hit the foe with a hundred times as much kinetic energy, as kinetic energy is half of the mass times the square of the speed. Such an arrow would also dig deeper into the foe from the increased force, and could cause fatal internal damage. And, there's the momentum being decupled, as well as the arrow being able to travel much further and not break upon landing in the foe. To demonstrate the effect of the increased momentum, we will take an .018-kg arrow that's traveling at 1 km/s fired at an 70-kg opponent who's standing still.

The momentum from the arrow would push the target back at .257 m/s, and if you get a headshot, it could tip them over. As for the perpetual motion machine, the quickened hammer would increase the energy by 25.44%, not 12%. But, it will increase the momentum by 12%.

Not the answer you're looking for? Browse other questions tagged magic medieval-europe items .

16
What would justify the use of serrated blades in edged weapons?
9
Benefits of Boomerang Enchantment on Items
5
Gaining the Quicken Enchantment