If you don't know what a Whackagi is, please click here. My problem is simple; I know how dangerous Whackagi are, but not how dangerous they are to what they hit, how much damage they can do with a single blow.

Here's what I know:

Thus, my question is How Strong Is A Whackagi?

Also note that Whackagis have two simple cylinders for legs (like an elephant or sauropod) and that their two arms and tail are stalks, each tipped with a ball of rubber (which I call "flails") that are about the same thickness and length as a tomahawk handle.

They Can Barely Move

The problem here is that no one seems to know exactly how strong is a normal-sized silverback gorilla. I cannot find any reliable source online. My guess is somewhere between 5 and 10 times as strong as a grown man, depending on the task. Note strength in one task does not translate to strength in another. While (I imagine) a gorilla can easily lift or shove a person, they are bad at moving quickly so cannot throw a punch or a ball quickly.

Unfortunately the Whackagi is effectively weaker then the small gorilla, since when it lifts a boulder for example it has to (a) lift the boulder and (b) bend its own arm. Some of the strength is used to bend the material in the first place.

The problem is I don't see a gorilla being able to bend a vulcanised rubber beam the thickness of its own arm. So my guess is the Whackagi cannot move at all.

How to fix this:

Give it a segmented body like an insect. Each body part is rubberised and very rigid. But the joints are made of something else that can actually bend. I'm thinking of Regice from Pokemon that is made of rigid ice crystals and can only articulate in certain ways. 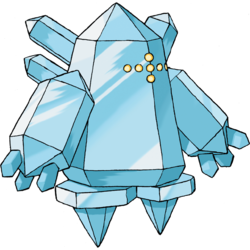 The rigid body means it is bad at bursts of movement, like striking and jumping. This is true for large animals in general (humans aside). Likewise it cannot move its flails very quickly. Fortunately the flails are heavy enough that speed is not necessary. Even dropping the flails on a victim makes them go splat.

Not the answer you're looking for? Browse other questions tagged biology physics mythical-creatures .

15
What are the ramifications of exoskeletal powered armor for a rat?
2
Is a shruikan dragon size possible in the real world?
3
How strong is a centaur's upper half?
9
Bones for bigger creatures
4
Just How Dangerous Would a Plopup Be?
3
How Dangerous Are Ploppers?
0
Making a Predator For Bitbugs
9
What are some of the structural problems inherent to a kilometer-scale hydrogen airship?
13
What biomaterials with higher compressive strength than bone can I use to make big but proportionate humanoids?